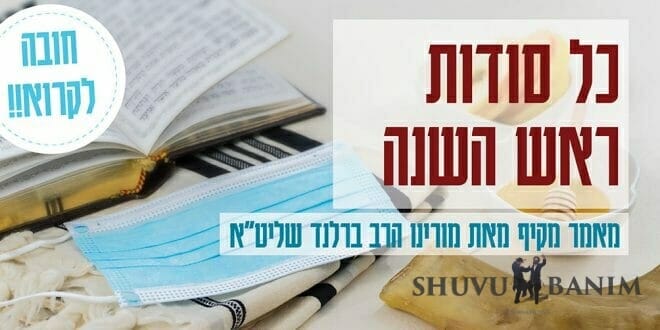 A special piece by Rabbi Eliezer Berland shlit”a on Rosh Hashana, revealing deep secrets of the process of redemption and rectification which Rebbe Nachman brings about during these holy days.  Warmly recommended.  A companion piece to the Rav’s amazing prayer for Rosh Hashana.  Below are selected portions with a link to the full Hebrew text at the end.

Two-hundred years after Rabbeinu’s passing [this was written in 5771], when Rabbeinu was included completely in the soul of Adam Kadmon (numerical value=200) — from there was his soul root, which descended by way of Atik, Arich, Aba, [Ema?], Zer Anpin and Malcus, until this world, and after the entire month [in which] we toiled to draw down the 224 lights of “Who makes a way in the sea, and a path in the might waters” (Yeshayahu 43:16) (Likutey Moharan Tinyana 87), which are two times YaBoK – BaKiY B’Rrzo (expert in running), the mystery of the angel Nuriel, and BaKiY B”Shov (expert in returning, the mystery of the angel Mem-Tet, which are the angels that protect a person and assist him in both running and returning, on the condition that he guards the seven branches of the menorah (Likutey Moharan 21) [meaning the eyes, ears, nostrils, and mouth], and not resent, not see, not hear, and not speak other than Torah insights, and only see the holy and pure letters which are vessels for the light of the infinite, which are drawn from Adam Kadmon by way of Atik, Arich, Aba and Ema, Zer Anpin, and Malchus until us.

After the 370 ribo (3,700,000) lights were taken from Hava, and 150 [ribo] lights from Adam (Sha’ar Kavanot, Rosh Hashana 6), the work of all the tzaddikim and especially Rabbeinu Nachman, is to return to us the 370 ribo lights and 150 ribo lights, in the mystery of “V’ten Sachar – give reward” (370 + 150=520 (Sachar—Reward) – “a good reward to all who trust in You in truth,” which are the 370 ribo and 150 ribo lights which were taken from Adam and Chava, in the mystery of “Now remove your adornments from upon you” (Shemos 33:5), which are Tal Oros (39 lights), which were received at the giving of the Torah (Ketubos 111b) after the rectification of the sin of the Tree of Knowledge, and after the sin [of the Golden Calf], they were taken anew.

And now, we have come on Rosh Hashana to rectify the sin of Adam HaRishon and the sin of the Golden Calf, from which all the sins and blemishes are drawn, and our entire desire and work now is to subdue all the klipos (forces of evil) which result from the fall of the 370 ribo (ShA) lights which have been turned into the moth [ASh] of the klipah (Likutey Moharan 41), which devours everything, which is the klipah of the worm [TOLa’AT] which devours all existence.  Therefore, they sacrifice every morning [OLAT] Tamid – the daily elevation offering, which is the numerical value of bull [ShOR=506], which alludes to the angel in the form of a bull, who is appointed over the deep, and at the splitting of the Red Sea, the angel in the form of a bull descended and burst open for them all the depths; he devolves from the bull which is in the Divine chariot.

When the Jewish people saw the angel in the form of a bull split open all the depths, they strayed after it, and immediately when Moshe was hidden from them, they thought how to serve the image of the bull which they saw at the splitting of the Red Sea and, afterwards, at the giving of the Torah when Hashem appeared with 22 ribo (220,000) chariots (see Bamidbar 2:3), all of which were in the image of four creatures: Lion, Bull, Eagle, Man, and they brought down from the chariot the image of the bull.  Therefore, Moshe said (Shemos 14:14), “And you be silent [TaChaRiYShUN], the letters of “you led us – bull” {NaChiYTa – ShOR] – that Moshe hinted to them, that even though you saw the image of a bull split all the depths before you – be silent and don’t stray after it (Sefer HaLikutim, BeShalach 14). 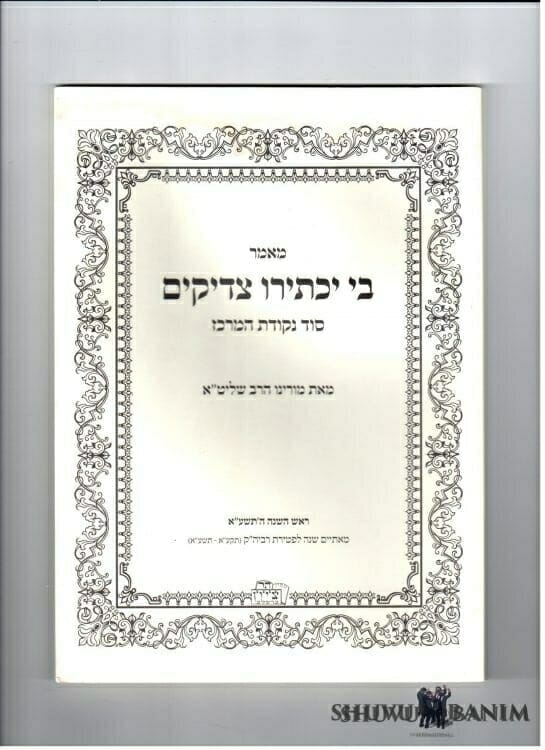 At the moment that Rabbeinu walked the first four cubits in the land of Israel, immediately the secret of Rosh Hashanah was revealed to him, which is the rectification of the sin of the Golden Calf and the sin of the Tree of Knowledge.  Then they return to each person the 370 ribo lights which were taken from him on the first day of his creation, [since] this day was established as a day of repentance for the generations.

Because Rosh Hashanah is the day of the creation of Adam HaRishon, because then there was a unification between Resha d’la Ityada (the head which is unknown)[1] with Adam Kadmon, in the mystery of “You are sanctified to me with this ring” [wedding liturgy]…

Therefore, those tzaddikim who are an aspect of Leah, and all those accompanying them, pass through, and bring everyone through already on the first night of Rosh Hashanah, and cancel from them every judgement and accusation, and draw to them completely new life which never was before, which still never was, nor was created, because every Rosh Hashanah is a completely new creation…

Because the true tzaddik in his ascending on Rosh Hashanah night to the Keter of Leah, the mystery of the point of the foundation stone, then he sweetens all the judgements from all the Jewish people, through the power of those who are gathered by him, and the greater the number of those gathered the more he can sweeten and cancel every judgement in the world, because the greater number of those gathered, so his power increases and multiplies through each and every person, tens and thousands and tens of thousands of times, in the aspect of, “Shaul struck down his 1000’s, and David his 10,000’s.”

The tzaddik who is an aspect of David succeeds in striking down tens of thousands of adversaries and enemies which were created through the sin of Adam HaRishon; then they came out of the Nukva D’Tehoma Raba (the depths of the klipah).  The first to fight them was Metushelach, the letters of Mavet-Shelach (death-sent), that he carved on his sword the name Havaya, and with every movement the sword would cut down myriads and myriads of destroyers (Pri Etz Chaim, Krias Shem al haMita 11).  Then already on Rosh Hashanah night, the true tzaddik succeeds in ascending to the Nukba d’pardeshka of Atik Yomin, and to draw the spirit of the revival of the dead of the right side, and the spirit of Mashiach to each and every person from the left.

Because then on Rosh Hashanah, the point of Mashiach is revealed in each and every person, of those gathered with him, which is the point of Yechida [the soul of ultimate unity], the point of nothingness, which we merit to fully on Yom Kippur with the entrance of the Kohen Gadol to the Holy of Holies mamash, to the foundation stone mamash.  Then “no person will be in the Tent of Meeting in his coming to atone in the sanctuary” (Vayikra 16:17).  Rabbi Abahu said that even for the Kohen Gadol himself it is forbidden to enter; only through shedding his body completely (Midrash Rabbah, Achrei Mot 21).

Because Rosh Hashanah is the preparation to shed the body completely, as is brought in the lesson from the “Burnt Book” – “And he reached the place” (Breisheis 28:11).  Then Yaakov shed his body completely.  And this is said to Moshe: “Remove your shoe from your foot” (Shemos 2:5), that he shed his body completely.  And all the Kohen Gadol’s who didn’t merit to shed their bodies in entering the Holy of Holies, and transgressed the prohibition “No person will be in the Ten of Meeting,” died in the Holy of Holies, or at the latest that same year.  After Shimon HaTzaddik, every Kohen Gadol entered the Holy of Holies with a golden chain on his leg [to pull him out if he is struck down].  Because only the true tzaddik can sweeten all the judgements from the Jewish people, as Rabbi Nosson explains (Likutey Halachos, Tefilin 6:23): “With this Aharon will come into the sanctuary” (Vayikra 16:3), that only one who merits to reach the ultimate nullification can enter the Holy of Holies without being harmed at all.”

To read the full text (in Hebrew), click here.

WATCH: Rabbi Eliezer Berland shlit”a on his Way to Uman after 3-Year Absence