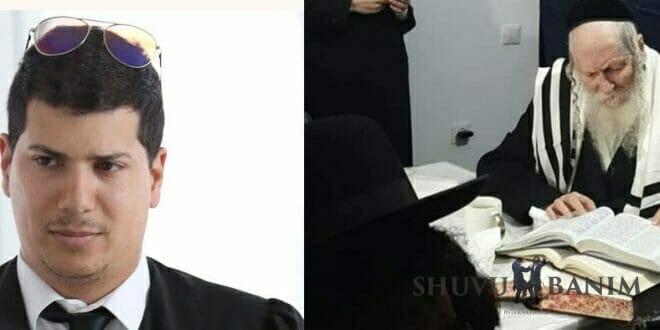 “The arrest of Rav Berland was forbidden to happen.  In a democratic state, they don’t arrest for things like these, which are accepted in the Jewish world in the past, and are also common and accepted today.  The bill of indictment has to include at least minimal facts which establish the offense, and here there were only catchwords.” – Comprehensive interview with the Attorney of our Rebbe Rav Eliezer Berland shlit”a – Amit Hadad.

The words of Attorney Hadad (courtesy of Kav Breslov 9148*):

“We still haven’t finished this saga, but there’s no doubt that this is the beginning of the end.  The release of the Rav is something that, to my grief, was delayed for a year, because the Rav, in my opinion, shouldn’t have been arrested at all.  However, from the moment that he was arrested we did everything so that we could release him, and Baruch Hashem, we merited that the Rav finally was freed.”

The Hatred Drove the People Out of their Minds

“When I became involved in the case, they warned me that, regretfully, in certain congregations and in certain communities, the Rav is taken to be some sort of creature that needs to be confined as far away as possible.  And to represent him – a line of enemies will rise up against me.

“The truth is that I didn’t ascribe to the words particular importance; it seemed that [we] were talking about exaggeration.  I’m sorry to say that I made a big mistake – it was under-exaggerated and not over-exaggerated.  No one exaggerated in this story.  Without doubt, Rav Berland was apprehended – and unjustly – anyone who knows the facts of the case, anyone who knows the evidence in the case, anyone who knows on what basis the things were written in the bill of indictment, knows that there is a tremendous distance between what [people are] attributing to the Rav and to what is found inside this file.

“Therefore, we thought that we need to work to free him, and in truth – this happened almost above nature.  Our argument, and it’s an argument which I think is so correct, and therefore so difficult to convince through – that the type of offenses which are attributed to the Rav are of the type of things which in a democratic state, the state doesn’t get involved and doesn’t check, and doesn’t look at these types of events.”

What Is The Claim

“What is the claim – the claim is that the Rav carried out a pidyon nefesh for people, and there’s no doubt that also according to their opinion a pidyon nefesh is an ancient Jewish practice.  Their statement is that the Rav didn’t believe in his power of healing.  Therefore, when he says to people that it will be such and such, if they give money they will be saved, and he says when he thinks, or believes, or knows that the thing won’t occur, by this he commits an offense.

“The fact that this type of offense is dependent on the faith of the Rav – this is something which is unthinkable.  Besides that, we showed that we’re not talking about an event which is unique to Rav Berland – that the pidyon is ancient.  Also in our times, identical things are happening in other places, and it doesn’t occur to anyone to investigate.

“Therefore, we held and hold, and we also believe that if this case will progress, then the things will come out in the open [that] there is nothing unique here at all.  The only thing unique is that we call the accused in this case – ‘Rav Berland.’  And the personal identity of the accused can’t impose a different legal result.”

“This is the argument.  This is an argument which is difficult to accept at first glance, but there is no doubt that if this case progresses, and we will be [involved] in it, the things will come to surface and everyone will understand how bizarre this is to use legal means, the means of criminal law, the harsh means of criminal law, in relation to events of this type.”

“We thought, think, and will [continue] to think, that this event was an event that was simply forbidden to happen in our reality.  The fact that the Rav was supposed to be released, was the decision of the judge in the Beit Mishpat Shalom who ordered his release – in actuality.  However, since the supervisors [appointed to supervise the Rav’s house arrest] delayed and didn’t come, they put off the hearing to the following day.  Then [overnight] they did something – they actually tore the accusation, the suspicions [into two].  [They] tore and pulled out from the accusations a few things that they thought were solid and ready, put this on paper, and with this they wanted to extend the incarceration until the end of legal proceedings, and they continued to investigate the rest [of the accusations], and all in order to keep Rav Berland imprisoned.

“In our opinion, this is something which is invalid from its foundation.  Therefore, I said that the release of the Rav today is an event that’s almost above nature.”

The Attorney Hadad explains that in the preliminary claims the judge erased for the prosecution tens of wrongdoings on their part, something which wasn’t publicized.  Once, because of blemishes in the bill of indictment [something which legally-speaking should have invalided their case altogether], the judge simply erased the mistakes from the record in order to cover up for the prosecution.

Hadad continues: “Regarding the final decision, we held that the bill of indictment in everything related to financial crimes is so thin, meager, and hazy that it’s really impossible to deal with it.  Because to come and say that the Rav made more than 138 million shekels and didn’t report this to the income tax [authority], and the only detail that you have is what I said now.  You won’t find any more than this in the bill of indictment.  This doesn’t make it possible for you to deal with the claim.”

“The bill of indictment needs to contain at least minimal facts which establish the offense.  Here, the things weren’t even skeletal – less, they’re on the level of catchwords.  And with a catchword, with all due respect, you don’t go and present a bill of indictment.

“This was our argument, which to my regret wasn’t accepted; but I think that as things progress, we will be able to prove them, and to explain from a standpoint of the court and the prosecution.”

“They wanted the evidence hearings to begin immediately.  In the end, we are subordinate, all of us, to considerations which are much more important than legal considerations, and these are health considerations.  To my grief, this isn’t a game.  Rav Berland is in a very, very complicated situation from a health standpoint.  This is what I say.  This is what the Prison Service says.  This is what the Supreme Court says. Everyone said this.  Therefore, this trial must be reconciled also in accordance with health concerns, and we subordinate ourselves to the professional viewpoint of medical personnel.

“There is no deadline.  I think that this is unequivocally a just request.  We really hope that the things will be heard, and considered positively, because the true possibility to conduct a mega-trial like this case against a person as ill as Rav Berland – we think that such a possibility doesn’t exist.  It seems to us that any person with a little intelligence understands this.  Maybe he’s not ready to acknowledge it, but everyone understands this.  A person who in his time in imprisonment was so much time in the hospital, who went through so many medical incidents, in imprisonment and also beforehand.

“For reasons of individual privacy, I won’t elaborate [about the Rav’s health situation and advanced age].  It’s clear that against a person like this you don’t need to conduct such an unprecedented proceeding, so bizarre, so erroneous, in our opinion, in order to check if he can survive the proceeding until its end.” [Note: The Rav was kept in prison for over a year without trial and without proper medical care].

For the Benefit of the Rav We Must Follow the Conditions for his Release.

“If we want the Rav’s benefit, we need to be strict with things.  Everyone should read [it].  There’s a long list: not to come to the place where the Rav is found.  The place is guarded in secret.  Don’t go there – don’t trip up the Rav, God forbid.

“You need to understand that it’s forbidden to trip up the Rav.  The Rav wants and seeks everyone’s benefit – this is my impression.  Don’t put him to a test where he wants to help someone but that through this he’ll harm himself.  Therefore, I request in every language of request to fulfill the things exactly as they’re written.  To set a safeguard even, for the things that are written there, in order to not trip up the Rav, and not to return him, God forbid, to the harsh place where he was.

“Rav Berland was in a harsh place.”

To Donate for the Rav’s legal and medical expenses, click here (English) or here (Hebrew)

From outside of Israel:

Click here to hear words about the Fundraiser Campaign (in Hebrew)

To see the video of Amit Hadad (in Hebrew)