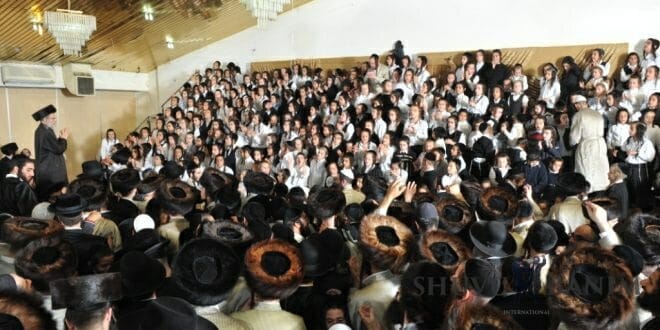 The wicked Bilaam delayed the redemption

We’re continuing the translation of Rav Eliezer Berland’s recent awesome comments on the holiness of the Rosh Hashana gathering in Uman. You can read Part I HERE.

The Or HaChaim was niftar in Israel on Motzae Shabbat, on the 15th of the month. The Baal Shem Tov had just ritually washed his hands, and then he’d received the secret of netilat yadayim, which is the secret of approaching Leah, which is only revealed to one in a generation. But, Rabbenu didn’t reveal this secret of ‘approaching’ Leah to anyone else, so how do we take Leah from Zeir Anpin, which is all the secret of Rosh Hashana?

Rabbenu walked his four initial amot in Eretz Yisrael opposite Eliyahu HaNavi’s cave, which is where he received this secret.

Because Eliyahu HaNavi is himself the name of Ban, which is why the dogs barked, because calev, dog, is also the name Ban. It’s written in Baba Kama 60b that the dogs barked.

Dogs possess the souls of evildoers

Dance from joy that Eliyahu is going to come, because dogs possess the souls of a particular type of evildoer. Dogs are the only animal that barks all day long. A lion roars when it’s hungry, but a dog barks without stopping.

“It’s forbidden to bring the price of a dog.” If a person swaps a dog for a sheep, or for the money he gets for selling the dog, he still can’t bring that to the Temple. But he can still buy something with it. In any case, the dog is thought of as being the most tameh (spiritually impure) animal, so much so that the Torah even wrote a special verse about this. Because it barks all day long. Dogs don’t know how to feel satisfied, so Hashem delays the food to balance this out, for three days.

But dogs do also thank Hashem…

By way of Eliyahu HaNavi, who knows how to rectify the souls that have even been reincarnated as dogs, which are the most repulsive souls, the worst souls that exist in the world.  Accursed, is the one who raises dogs. If a person raises a dog, he won’t have parnassa (income), he has nothing. Everything goes backwards, and he is stuck in the curse.

If there were 172,000 in Israel, and even just one is missing, because a woman needed to give birth, and then the dog barked, and then she miscarried – so that dog caused the Shechina to be parted from Yisrael.

Spiritual rectifications occur on the first night of Rosh Hashana

Balak saw this ‘rescuing’ as the licking up [of grass] of the ox; that the firstborn of his ox is his splendor, because everything was being done by way of Yosef’s casket, Yosef HaTzaddik, who hinted to the brothers with the goblet. Yosef hinted to them, [that they should say] ‘we are the guilty ones’, as Reuven said at the beginning, at the moment when they were put in jail. Reuven said ‘we are the guilty ones’, and after that they already saw such miracles, such wonders.

The brothers simply learnt a whole shiur (Torah class) in emuna from Yosef HaTzaddik, from the doctrine of the King, and he told them that everything is Hashem, everything is Divinely-inspired. [He said to them] Do you think it’s some random thing, that you stam received a million dollars returned back to you in your baskets?! This thing came from Shemayim (heaven), this million dollars!

Who can merit to really attain this sort of emuna? Halevai, I wish I could merit to have that sort of emuna. Halevai, that we should even understand a single sentence of Rabbenu’s, after a billion years already, after 10,000 years.

The Rebbe blessed Rav Aharon of Breslov that he should merit, after 10,000 years, “to understand even just one mundane comment of mine [i.e. Rebbe Nachman].” So, we should merit to understand a single one of Rabbenu’s sentences. If Rabbenu said: “No man should be missing” [from the annual gathering by his grave on Rosh Hashana], then there is nothing bigger than this.

We are obliged to be with Rabbenu

It’s forbidden to try all sort of tricks [to try to avoid going]. If a person is compelled, mamash, to not be there, then it’s considered as if he were actually there, but only if a person is mamash compelled to be absent.

We are obliged to be with Rabbenu haKadosh (i.e. Rebbe Nachman).

Rav Natan said that he would still travel [to Uman], even if the way was studded with knives.

The most awesome secret

Rabbenu received this awesome secret, he was the only one throughout all the generations, until the coming of Moshiach, and then Moshiach will also receive this secret by way of Rabbenu, who revealed the secret of nesirah, how to free Leah from Zeir Anpin.

This is the biggest secret of all the secrets. And when Balak saw what Israel did to the Amorites, that the heels of Leah had been entered into the crown of Rachel, he sent shlichim (messengers) to Bilaam.

Bilaam was a wicked man. The gematria of Bilaam equals that of bliyael, wicked. [Balak] said: Bilaam, what should we do? We’re finished! They could see that the world was finished, and that in his merit, the world would continue for another 3 ½ thousand years. It’s written in the Zohar, Parshat Shelach, קס”ה that if the dove had brought the neshama of Moshiach, then the world would have ended.

The End! We wouldn’t have come down to the world, there wouldn’t have been any rectifications for us to do. They intended this for bad, but by way of their actions, the world continued, and there were two Temples.

Now, we are going to build the Third Temple

Now, we are going to build the Beit HaShlishi (Third Temple). Now, on motzae Yom Kippur, all of us need to see a Beit HaMikdash of fire. If, God forbid, Moshiach doesn’t come this year, on motzae chag, the first motzae yom tov, then we’ll need to wait another seven years. This will be mamash a catastrophe!

We really need to pray very strongly. It says in the Gemara, Tractate Rosh Hashana ל”ב, that there were two seriously ill people, and that one arose from their sick bed, but the other one never got up again. One of them prayed with all of their soul, and with all of their heart, and with great strength [and was healed].

Nineveh cried out with great strength

It’s written about Nineveh that they “cried out with great strength” [when they heard about the heavenly decree that had been made against them]. They cried out, tremendously. They were goyim, non-Jews – and the non-Jew prays better than the Jew! If he’s going to pray, he’s going to cry out with all his strength! He’s not going to be embarrassed about what he’s doing in front of anyone else.

We have to pray with strength, and this how we are going to free Leah from Zeir Anpin, because only by way of prayer, can we rescue Leah.

All the effort that we make to learn Gemara, this in order that we will have the brains required to pray, and to ‘cry out with great strength’.

[Then] they said: ‘Why did we make teshuva?!’ The city wasn’t overturned, the world continues to turn as it always has. We were stam idiots, to believe in the Prophet Yona.

Forty days after they repented (but then regretted it), the city sank into the earth.