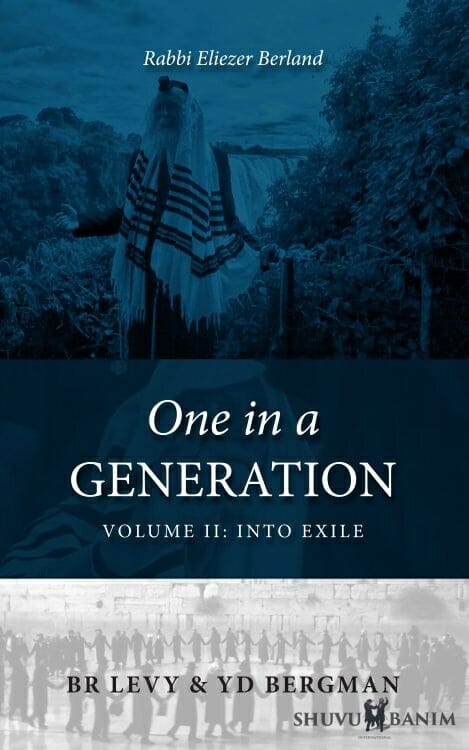 BREAKING NEWS: One in a Generation Volume II is available!

With tremendous gratitude to Hashem, we’re pleased to announce that One in a Generation Volume II is now out, and available for the public to buy on Amazon.

You can buy the book on Amazon HERE.

You can buy the book directly from our website (for less money, and with much cheaper and faster shipping to Israel, plus a free PDF download of the book for immediate reading) HERE.

You can also buy just the ebook / PDF from our website, HERE.

We are currently working on arranging the Kindle copy of the book, and also a hard-back, full-color version of Volume II, which will contain many more pictures of Rav Eliezer Berland, shlita.

We are printing 200 copies of the first paperback edition in Israel this week, and Bezrat Hashem, we hope to print a second edition after Pesach, funds allowing.

If you would like to donate to help get more copies of the book printed, please go HERE. All new dedications will be included in the second edition, which will be printed as soon as we’ve collected enough funds for the print run.

To whet your whistle, we’re happy to share the introduction to Volume II, Into Exile, and the Contents page, below:

That was the question we were wrestling with over the last two years of writing the book you now hold in your hands. So many times, we flipped backwards and forward between clearly laying out all the gory details, and clearly identifying the names and actions of the Rav’s main persecutors – or not.

On the one hand, it often seemed that the only way people would be able to get past the lies they’d been told in the media, and via all those pamphlets full of slander that had been carefully placed in synagogues and learning halls around the country, was if we tried to dissect each lie and libel one by one.

So in some of the iterations of this book, that’s what we did. We explained in minute detail how the Rav’s persecutors managed to pull the wool over so many people’s eyes, and all the different people, organizations and institutions who helped them to do it.

But then, just before the manuscript was meant to be sent to the printers, we started to get some hints that this was not what God really wanted. So then, the doubts and the confusion returned, because surely if we didn’t name names, if we didn’t explain exactly who was behind the persecution of the Rav and what their motives and modus operandi was, no-one would take us seriously.

We’d be accused of trying to whitewash the whole story, or trying to hide things.

For many long weeks, we were in an agony of indecision and confusion, so eventually, we turned to the book of Advice, the Kitzur Likutey Moharan, and opened it up randomly, to see if we could get some guidance that way.

It opened to a page entitled “Controversy and Strife”, where we read the following:

“When a person is involved in a dispute, he should never get up and say that whatever his opponent does to him, he will do to his opponent in return. This will only help his opponent to achieve what he wants, which is to see his victim suffer. The best thing to do is to judge his enemies in the scale of merit, and even to do them favors where he can. This is the best way to foil their intentions. In the end, their evil intentions will all rebound on their own heads.”

And that’s when we realized that, at least for the authors of this book, naming and shaming the Rav’s persecutors is not the right path to take, however tempting it appears. However, for anyone who still wishes to understand that part of that story further, that information is already available online, both in Hebrew and English.

After this revelation, we went back to the drawing board, and totally revised the manuscript to place the focus back on sharing the light of Rav Eliezer Berland, instead of on detailing the dark deeds of the people who are opposing him.

For in the end, their evil intentions will all rebound on their own heads.

Without any assistance from us.

So, this book continues where the last volume of One in a Generation left off. We begin this book with a brief digest of the main points shared in the first volume, so that new readers can easily follow the flow of the story.

Click HERE to buy the book on Amazon – and please leave reviews on Amazon, to encourage others to read the book and learn the truth, too!