The persecution of Rabbi Eliezer Berland, shlita, and his chassidim is continuing to ratchet up, as the following words show. Even though they may seem incredible, we have fact-checked them, and they are true.

Rabbi Aharon Berkovitz, shlita, has been the shaliach tzibbur for the Breslov community at all the previous huge prayer gatherings, and is well-known for his piety and yirat shemayim (fear of heaven). He’s a mature individual, and the person who was carefully chosen to recite the tehillim at the prayer gatherings.

Yet, even Rabbi Berkovitz has been pulled in for questioning by the Israeli police.

The subpoena was puzzling for a number of reasons. Again, we are talking about a true oved Hashem, who tries to distance himself from any publicity (even though in the past, he held a position in the Sayeret Matkal, the highest division in the IDF.)

But when Rabbi Berkovitz was taken to the police station, the investigator told him explicitly:

“I am waiting to see your [members’ of your community] blood spilt on the floor.”

This is not about the pursuit of justice, and never was.

It’s about a war being waged by the Israeli Police, the secular State of Israel, and the people who are pulling the strings behind the curtain, in chutz l’aretz, against the Tzaddik of the Generation.

Over the years, so many people have benefitted from the prayers and blessings and self-sacrifice of Rabbi Berland, shlita. Every second, we are continuing to benefit from his tremendous mesirut nefesh, and willingness to take so much shame and persecution upon himself, which is continuing to protect us from so many threats and dangers.

So, we turn to you, members of the public, and we ask you to please join us tomorrow, at another prayer gathering in Hevron, for the success and safety of Rabbi Eliezer Berland.

The prayer gathering will take place tomorrow evening, Wednesday  February 12, 2020, by the Mearat HaMachpela in Hevron, beginning from 9pm.

Additional details are available by calling the Breslov line, on *9148.

As is widely known, many of the individuals who incited this latest round of machloket and slanderous persecution against the Rav call themselves ‘chareidi’.

These individuals encouraged the police in their pursuit of the Rav in a manner that beggars belief, and have also played an instrumental part in continuing to spread ridiculous slanders about him, and to create the media circus around him.

And all this has continued to occur, despite the fact that these individuals began proceedings against the Rav in Beis Din last year – and then subsequently refused to abide by the ruling of that self-same Beis Din, that the ongoing persecution and slander of the Rav in the secular press and via the secular courts should stop.

Whoever pays taxes in Israel should be aware that your money is being used to pay for a corrupt, self-serving judicial system that keeps showing itself to be far more about protecting vested interests than pursuing real justice, or protecting the best interests and safety of the public.

We cry out from the depths of our hearts about this miscarriage of justice.

Until when, is the evil going to continue to rule, and to keep pursuing the good?

And so we turn to you, dear reader, with a request that you should help us tip the scales back towards good and justice, by attending the prayer rally tomorrow night, at the Mearat HaMachpela, in Hevron.

The gathering has been called just prior to the next scheduled hearing against the Rav.

How long will the evil be permitted to rule over the good, Hashem?

[This is a personal note from the editor of the Hebrew Shuvu Banim website:]

I woke up this morning, and I saw the brutal way that the police took Rabbi Eliezer Berland, shlita, into custody. I am so full of tears, and not because I’m one of his students, or because I’m a part of the Shuvu Banim community.

I’m crying, because I can’t understand how a person who has spent every day of his life engaged in learning Torah, prayer and doing kindness for others and always putting other first, can be treated in this way.

It’s so painful to see how the Jewish State is behaving against Jewish people, and in particular to a Jew like this, who really should be shown so much respect and gratitude.

And the most painful thing of all is that once again, the evil – especially those people who falsely present themselves as ‘erliche yidden’ and Breslover chassidim – appears to be ruling over the good.

So we ask you, dear reader, to come and strengthen the side of good in the world, and to join us tomorrow to pray in Hevron.

Come and join your tefillot to ours, that the holy and true leadership should be restored to the Jewish people, and that the Torah teachings and prayers of Rabbi Eliezer Berland, shlita, should finally be accepted, and that good should finally start to win out in the world, and not evil.

And Hashem, please come and rebuild the Beit HaMikdash for us, and let us finally welcome Moshiach Tzidkenu, speedily in our days.

Because we can’t do this anymore.

Pictures from the latest spontaneous prayer gathering that occurred (in the pouring rain), in the merit of Rabbi Eliezer Berland, shlita, in Hevron: 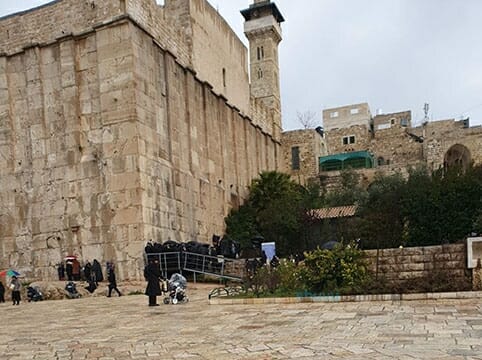 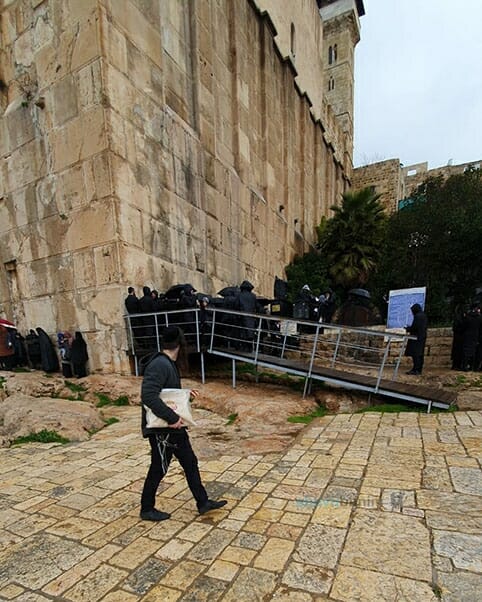 The Savraner Rebbe revealed when Moshiach will come

The Midrash says Moshiach will sit in jail – Rabbi Lugassy