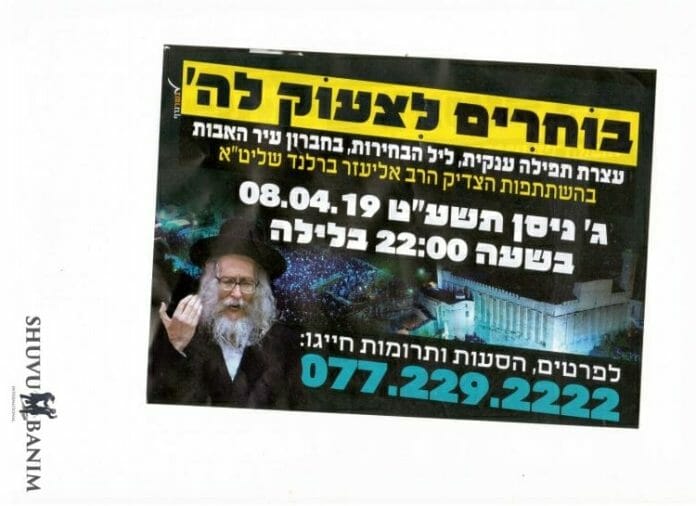 Latest Details about the Prayer Gathering on April 8th, 2019

Back on December 7th, 2018, well before any Hizballah tunnels had been discovered in the North of Israel; well before rockets from the Gaza Strip were falling around Tel Aviv; long before the government collapsed, and new elections were called for April 9th, 2019, Rav Eliezer Berland put out the following message:

“They are preparing thousands of rockets”

“The whole of Am Yisrael is currently facing a terrible, threatening situation. Every part of Israel is now under threat of being deluged with rockets.

“After we saw 400 rockets falling on Ashkelon and the surrounding cities, including Beer Sheva, Netivot, Ofakim and Sderot, now they are preparing thousands and thousands of rockets, which will reach to Tel Aviv and Jerusalem.

“And we have no possibility of stopping this from happening,

[B]ecause the whole world is against us.

“They can launch 10,000 missiles, and if we fire back even just one, they will say that we are the aggressors, and they are the victims.

“They will say that we began [hostilities], and that they are simply defending themselves.

“We have no [military] might, we only have the power of tehillim (psalms). All of the State of Israel’s efforts to stop the missiles of Hezbollah and Hamas ended in failure. Every day, we are threatened with thousands of new rockets. They can reach any target precisely…

“Am Israel is in the greatest danger, mamash,

And our only possibility of coming through this lies in our mouths: “The voice is the voice of Yaakov, and the hands are the hands of Esav.” (Bereishit, 27:22).

The final moments of the State of Israel

“We are now, mamash, at the final moments that we can stay in Eretz Yisrael, in the State of Israel, because the goal of the Arabs is to destroy everyone here.

“They want to annihilate every single Jew, until the very last one of us – regardless of whether he’s secular, or religious, or Mizrachi (Sephardi traditional), or kipat srugah (National Religious).

We are in the gravest danger

It’s written: “And I will divide them, into the light and into the dark” (Bereishit 1:4).They are not going to distinguish between the ‘light’ and the ‘darkness’. Right now, we are all in the gravest danger, mamash.

So, we need to really urge people to attend this Prayer Gathering, so that almost 50,000 thousand people will come.

“And everyone should read the whole of the Book of Tehillim, which will [form] the shoes for the Shechina… every single person is obliged to complete the book of Tehillim at the Prayer Gathering, and to make good use of this opportunity for 50,000 people to say tehillim together.

“This will (be considered in Heaven) as though a billion people are saying tehillim (psalms), and this will certainly stop the tillim (rockets).

“Only tehillim can stop the tillim – not the IDF, not weapons, not tanks, not Patriot missiles, no Iron Dome – none of these things can stop the missiles.

Only the tehillim that we will say at this Prayer Gathering can stop the missiles.

“And in the merit of this, everyone will have a long life, like Yitzhak, in the merit of participating in this Prather Gathering…. “And the Rav will of course be coming, without doubt.“The whole of Am Yisrael is invited to come to the Prayer Gathering, and to finish the book of Tehillim, and this will erase Hamas from the face of the earth.”

Four months later, who can question the Tzaddik’s ruach hakodesh?

Details of the prayer gathering on April 9th, 2019

We are in great danger, mamash, and the Rav has called for as many people as possible to attend the forthcoming prayer gathering, to be held on the evening of April 8th, 2019, in the City of the Patriarchs, Hevron. Rav Eliezer Berland, shlita, will also be in attendance.

The gathering will begin at 10pm, and there will be subsidized buses arranged from all over the country, to bring people to Hevron.

For more details of the buses, and / of if you want to donate to help defray some of the costs of the transportation, please call: 077-229-2222

No one should be missing.