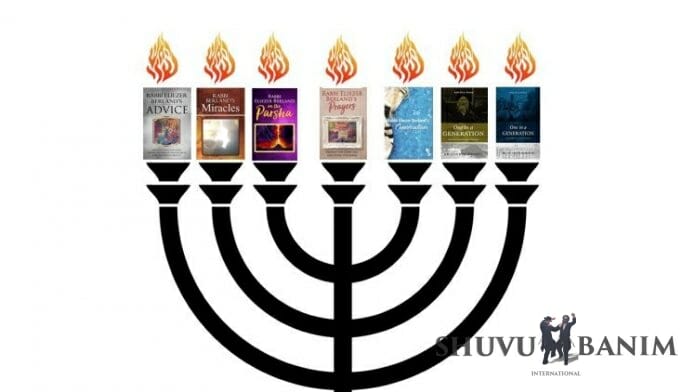 How hafetza can change everything around

With tremendous gratitude to Hashem, we’re pleased to announce that all of Rabbi Eliezer Berland’s books in English are now available to buy in Israel in paperback!

The last book was printed two days ago, and now there are 100 copies of each of the Rav’s English books available, on a first come, first served basis.

You can also download the PDF of each of the English books by going to the ‘store’ tab on the site HERE, and print it out directly at home.

Rabbi Berland, shlita, has made it clear on numerous occasions that getting more of his books and prayers circulating in the world is the only way we can really beat the tumah that is threatening to engulf the planet, and to sweeten all the harsh dinim.

Each book that is bought, each prayer that is shared, each PDF that is printed out, physically, is literally tipping the scales between good and evil. And every tiny bit of effort made with hafetza, or the distribution of the Rav’s works, is having enormous repercussions, that aren’t always immediately obvious, as the following story shows:

Menachem is one of the Rav’s long-time students. Below, he shares his experience of doing hafetza, aka distributing the Rav’s works and prayers as far afield as possible:

“Today when I began doing hafatza with the new English books printed in Israel for the first time, I gave a set to Rav Eliyahu Succot, shlita, at a Sheva Brachos. He thanked me and told me a story about someone in New York who had a very difficult life and decided to commit suicide by jumping off the Verazano bridge.

On the way to the bridge, he tripped and fell and he saw on the floor a paper. He picked it up to read it, and it was a printed teaching of Rav Eliezer Schick, z’tl. The words there had such an effect on him that it completely changed his life. He turned around and eventually became a Breslover. Today, he’s connected to the Rav.

Rav Succot said you never know where things are going to lead, when you go do hafatza.

It could even be that someone throws what you give him on the floor, but each thing has its address and Hashem knows exactly where to send it.

A person overheard us speaking, he is a holy chossid (follower) of the Rav with long peyos (sidecurls) and a lot of kedusha (holiness).

He said that a few years ago he was a Litvak learning in a well-known Israeli Litvish Yeshiva in Jerusalem where it was forbidden to talk about Breslov.

One day he was learning Gemara in the Yeshiva and within the pages of the Gemara he found a Torah sheet called ‘Knishta Chada’, which was about the Rav. The stories about the Rav were full of holy light and inspiration, and the man made sure to look out for more of these pamphlets, when it came out each month.

Lo and behold, every once in a while the sheets would miraculously show up in the Yeshiva, as if they fell from heaven. He would share it with his friends while hiding it from his Rabbeim, to make that they wouldn’t see it.

Eventually he came to the Rav.

He is now a Breslover, married with children and  learning in the chatzos kollel of Shuvu Banim.

When he finished telling the story, I told him that I was the one that put it in the Gemaras.

I knew that there is no way that I could just go and hand out that material in this Yeshiva, so once in a while I would go in, sit down and learn Gemara – and when no one was looking I would put a sheet within the pages of the Gemara.

I knew that Hashem would send it to the right person at the right time, but I had no way of knowing at the time if my actions were having any effect.

But here today, boruch Hashem, 8 years later, when this man is standing in front of me thanking me profusely for changing his life, I am witnessing the fruits of my labors.

I see before me a holy person who could literally be my Rebbe, telling me that it’s because of my actions that he is who he is today.

But I was just the shaliach.

Hashem and the Tzaddik were doing it all.

It’s never been easier to do hafetza with Rav Berland’s teachings and prayers in English!

Check out the Store tab HERE, and take your pick from tens of different options for PDFs, E-books, laminated prayers and paperbacks.

Don’t forget, that the books are also available on Amazon, too, if you live in the UK or the USA.

May the light of kedusha spread to every part of the planet, and may it finally vanquish the forces of darkness.