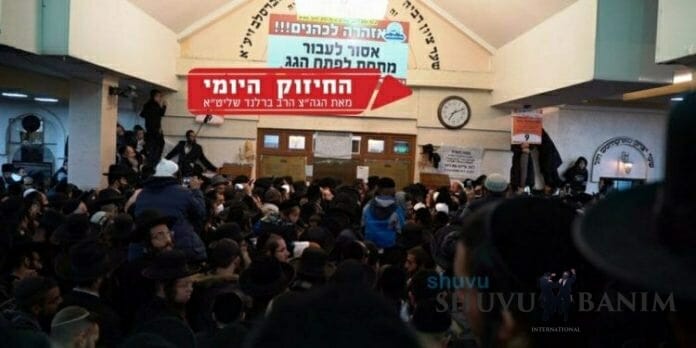 The Daily Chizzuk with our Rebbe, the Gaon and Tzaddik, Rabbi Eliezer Berland shlit”a – If you don’t lose faith, you merit to a revelation of G-dliness

Megilah 14a: “Miriam the Prophetess, Aharon’s sister, took the drum in her hand” (Shemot 15:20).  Aharon’s sister and not Moshe’s sister?!  Rav Amram said in the name of Rav, and some record it in the name of Rav Nachman in the name of Rav:  That she would prophesize when she was Aharon’s sister and say, “In the future, my mother will give birth to a son who will redeem Israel.”  And the moment he was born, the entire house was filled with light.  Her father stood and kissed her on the head, and said to her, “My daughter, your prophecy has been fulfilled.”  And because he was thrown into the river, her father stood and struck her on her head and said, “My daughter, where is your prophecy?” as it’s written (Shemot 2:4), “His sister stood from afar to know – to know what would come of her prophecy.

Everyone needs to buy a ticket to Uman.  It doesn’t make a difference – it’s possible to buy a ticket for Saturday night and still manage to reach Uman [before Rosh Hashanah].  If you leave Saturday night, you will manage to reach [there].  They already spoke to the police, spoke to everyone to allow entrance to Uman, to not delay, to allow [us] immediately to travel, even though there is a curfew there and a war.

They spoke already with all the police, with all the army, that when people reach the Ukrainian borders, they’ll immediately let them through without delays.  Within six hours, they’ll reach [Uman] from Kishinev [Moldova], within nine hours they’ll reach [there] from Iasi [Romania], and whoever travels from Warsaw will need to travel by train.

Whoever doesn’t manage by way of Iasi and Kishinev, there will be a special train to Uman from Warsaw.  By train, this is twenty hours.  They already spoke with the train [companies], spoke with everyone.  Everything is already ready.

The tickets are already almost gone, none.  So you need to get to Uman with the greatest speed without delays.  The last ones will need to come by train from Warsaw.  This is a twenty hour trip until Uman mamash.