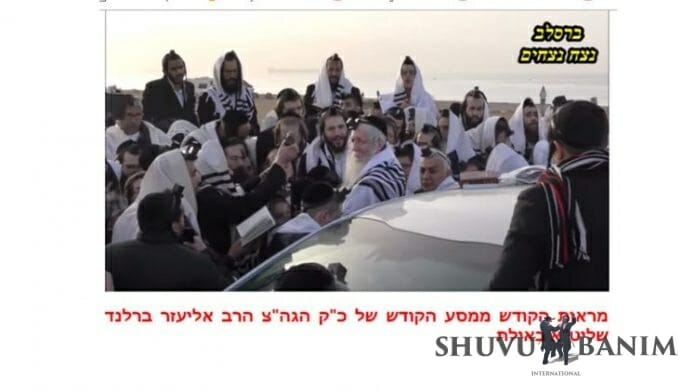 Rav Berland returns to Eilat, and the miracle of the disappearing cancer

Barely two days after being struck by a very serious throat infection, Rav Eliezer Berland, shlita, returned to his regular schedule of visiting communities all over Eretz Yisrael – and went back to visit the city of Eilat.

The Rav has visited Eilat on a number of occasions recently, and on each visit, the numbers of people waiting to greet him have grown and grown, as more stories about the Rav’s miracles are being told.

For example, on this latest visit, which took place on Rosh Chodesh Shvat, 5779, one resident of Eilat came up to the Rav, to tell him about the miracle he’d just experienced, as a result of the Rav’s blessing.

“Back in 1997, I was diagnosed with malignant cancer. When his honor the Rav (Rav Berland) came to the syngagogue where I was praying in Eilat, he gave me a blessing, and told me:

“There will be no trace of the cancer remaining, by Chanuka.”

“And this is really what happened! I went back to the hospital, and the doctor got confused and asked me: “Where did you go?” I told him that I’d been where I needed to be. The doctor told me that he’d never seen anything like it.

“I got a shock, because I thought he was going to tell me the cancer had gotten worse.  But he calmed me down, and told me that it had disappeared without a trace.”

“Thank you, holy Rabbi. May Hashem bless you with enjoying another 120 years of good health, happiness, and every good in the world – just as you are giving to others.”

(You can watch the video of the man giving over his story live to the Rav in Eilat (in Hebrew) below:)

The Rav visited many private homes and synagogues around Eilat on this trip, where he gave over a number of Torah lessons, and also met with members of the public. In his comments before the evening prayers, the Rav had the following to say:

“This is like Yosef HaTzaddik, of whom it was said, and everything he did, Hashem made it successful in his hands’. When Potiphar wanted to drink something, and he was brought hot water, and he’d tell [Yosef] ‘I wanted cold water’ – instantaneously, the water would turn into ice.

You can see a video of the Rav praying the morning prayers with his followers near the beach in Eilat, below:

Order of the Day: Kimcha D’Pischa for Poor Families by the Holy Shuvu Banim Community