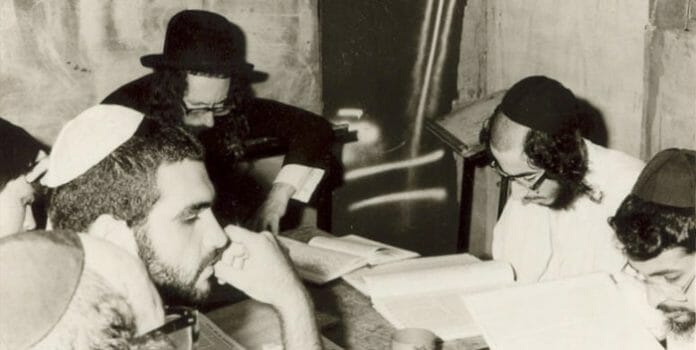 Host: Rabbi, we spoke with you a year ago, when you told us some inspirational stories.  We want to hear more stories, to the best of your recollection, about your days in the Shuvu Bonim Yeshiva in Bnei Brak, 35 years ago.

R’ Bublil: Yes. We were visited by a young man by the name of Michael Lasry. His father was anti-religious. Anti-religious. He didn’t want religion no way, no how.

Host: And look how his son turned out.

R’ Bublil: Yeah, he got connected, he grew in Torah observance. And then he asked me, he said, “Look, I’m thinking of finding work, choosing a profession so I can provide for my future.” I told him, “If you choose a life of Torah, your future will be bright.  You’re talented.”  I could see his talents, that he was very talented, he said, “OK, let’s get started”. He then got married, after which I employed him in a national network of Torah lectures.  I sent him to teach at a place in Bat Yam. He ran the Torah lecture network there, and there he realized his talents and others discovered his talents. He began peppering his lectures with humor that please the audience, until he got to where he is today.

Host: At what point did he arrive at the Shuvu Banim Yeshiva?

Host: Oh, from the beginning.

R’ Bublil: From the beginning, yes.  Later, while he was there, Arush—what’s his name—

R’ Bublil: Rav Shalom Arush arrived with long hair and a huge dog, and wanted to be accepted. So Rav Moshe Beanstock said, “If you want to be accepted into our yeshiva, you must first give up the dog. Secondly, you must cut your hair. He agreed! He did it. We then saw that he was talented, so we let him take on responsibilities. He started bringing people closer to Hashem, to emulate Rav Berland. He got very close to Rav Berland and, thank G-d, from toiling in Torah, he elevated himself.

Host: What other students were there at that time?

R’ Bublil: There was another student who used to be a priest in the United States. He was a Jew—ultra-Orthodox—he was a Jew who was at first a priest, until he discovered that their belief system, Christianity, is just meaningless. He was a mathematician.  He decided to try Judaism, so he came to us. He came to us and grew very strong in his Torah observance. He became one of the pillars.  There were a few more like him, very strong in their observance, who had started out as people we had no hope would ever be great, who went on to become some of the great men of their generation.

Host: How did they all happen to find Shuvu Banim? What brought them there of all places?

R’ Bublil: It was advertized. Initially the Shuvu Bonim Yeshiva was called “Roni baLayla”. Then it was decided that Roni sounded like it might be the name of a girls’ seminary. So it was decided that the name would be changed to Shuvu Banim, which was deemed more suitable. So it was changed. But there were so many adventures.  There was someone named Levy.  Nowadays, he looks like an angel.  He was there for a few months before we discovered his talents and he began to take on more responsibilities. All of these people began to operate in different parts of the country.  Each one opened a yeshiva, or had a group banded around him, and grew stronger.  Each tried to emulate Rav Berland.  He scattered dozens of men across the country, of those who emulated him.

Host: When you say, “emulated”, you mean this in the positive sense, right?

R’ Bublil: Of course! Only positive. Rav Berland, in my eyes, is like an angel, like a seraph.  For me, he is like the Holy of Holies, Holy of Holies! I told you once; I’ve known him for over 40 years. This man was like an angel even back then. Today…everything people say, we poke fun of it, ridicule and deride it. People who speak about him are so unfortunate. They are so unfortunate, so wretched. I don’t envy them. They’re talking about a messenger of the Lord of Hosts!

Host: You’re saying that even back then he was an angel, can you explain?

Host: How did that show?

R’ Bublil: His davening—three hours of prayer with devotion to Hashem. I was with him all day long, morning till night, and all this man did was speak Torah.  He would reveal hidden esoteric concepts to me.  No one can understand these concepts on even the simple level. These were all very deep concepts. A regular person could go on like this for a day, or two, or three. He went on for years like this, growing like an ever-increasing wellspring. He knows so much, giving it over constantly. He never rests. He would always say, “Let’s learn halacha (Jewish Law), let’s learn this, let’s learn that”. He wouldn’t let me rest. Every day, I was with him until 1 or 2am, every day. No one can do this, what he does. Someone once went to the Steipler and asked for his blessing. The Steipler asked him, “Where do you learn?” and he replied, “By Rav Berland”. The Steipler replied, “And you’re coming to me? Do you know who he is?” The Steipler said, “Do you know who he is? A blessing from him is enough; you don’t need me.”

Host: Pssh, where did you hear this story?

R’ Bublil: What do you mean? I was there.

Host: No, I mean when the Steipler was asked this question.  You were there?

Host: Wow, this is the first time we’re hearing this story.

R’ Bublil: Naturally, I just have to try to remember.  I have thousands of stories about him. I just have to try to recall, because we’re talking about years. It’s not like I was with him for a month or two. It was many years. This is a person who, when I understood what he was, he was a divine angel, a messenger who receives transmissions from On High all the time.

Host: Saying something like that is a big responsibility.

R’ Bublil: A big responsibility? I take responsibility for my words. Whoever knows him up close, knows that he is a messenger of the Lord of Hosts. A seraph, not just an angel—a seraph!

Host: What can you tell us about his level of faith, his belief in Divine Providence?

R’ Bublil: No one is more devoted than he. No one. Devotion like this—nowhere else. I’ve never seen such a thing, and I know many pious tzaddikim. Devotion like this—24 hours a day—he’d forget to even eat. Once a day, he’d grab a morsel of food. You know how he looks, all skin and bones.  He’s always looked like this. He doesn’t eat at all. He once went three straight days without eating. Rav Bienenstock once grated a carrot for him and fed it to him with a small spoon, slowly, after he hadn’t eaten for three days. We were afraid for him. He just learns and learns and learns Torah. He pays no attention to food, has no earthly desires, none.  Just the Creator and His Torah that He commanded us to keep, and that’s all. There is none else besides Him, none.

We’ll have to end here, because I’m in a big hurry.

Host: OK well thank you rabbi, we’d love to hear more and more from you.