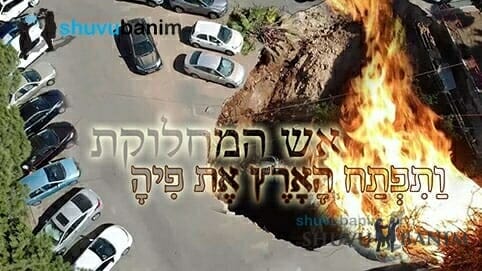 You don’t need to be a pessimist to see that disaster is following on the heels of disaster.  Everything is in collapse, as the tzaddik and kabbalist Rabbi Gamliel Rabinowitz said: “The entire public, I want the entire world to hear this, Gedoley Yisrael will see this.  We received three blows: 1. Corona, 2. La”G B’Omer, 3. Shavuos.”

Everyone is searching for the root and cause of all the disasters which are suddenly striking us, one after the next.  Not to say that before this everything was quiet, but the tragedies and troubles are only multiplying and getting stronger, until it becomes clear to everyone that they’re coming because of a certain reason — a sort of voice which is calling upon us to wake up.

Four years ago, during the previous wave of fires the kabbalist and tzaddik, Rabbi Dov Kook shlit”a from Teveria, said:

“All the difficult fires which are out of control now in the area of Zikhron Ya’akov are because they are persecuting and oppressing the holy tzaddik Rabbi Eliezer Berland shlit”a, and the aspect of judgement has especially harmed us in the north.  We need to know that the difficult fires which are out of control there in several centers is because Rav Berland is found in the area of the north near Teveria, and the midrash says that when [people] are persecuting and disgracing tzaddikim, the Kadosh Baruch Hu brings fires to the world! 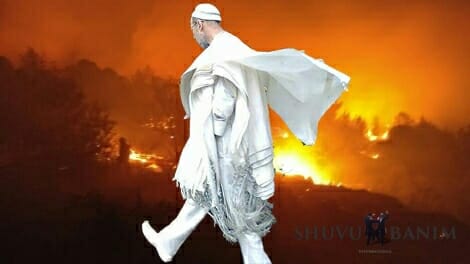 “And [we] need to warn all of the libelers and speakers of libels and lies about such a holy and awesome tzaddik as this — that he should return soon — that there is a judgement and there is a judge; mamash his glory and innocence will be revealed before everyone” — here concludes Rav Kook’s holy words.

Am Yisrael — wake up!  Does this seem natural?  Does this seem like chance?  A moment after the decision against the Rav shlit”a and suddenly the entire country goes up in flames!!  Enough!  Really, when will we wake up?!

However, we don’t internalize the matters and we’re playing with fire, with the lives of the Jewish people.  For the third time in history, they bring to the courthouse an 84-year-old Jew, a tzaddik, bound to a stretcher, covered in a tallis — and the country once again is burning.

The kabbalists and hidden tzaddikim are warning, that God forbid, it shouldn’t be worse…

At the beginning of the last wave of riots in Gaza and from within, the elder kabbalist, the tzaddik Rabbi Amos Gweta shlit”a from Netanya said:

“For a long time the Jewish people are silent, and gedoley Yisrael are silent, and the entire world is silent — regarding the disgrace of a great tzaddik, the tzaddik of the generation who is Rabbi Eliezer Berland shlit”a, who they are disgracing from morning to evening.

“Rabbi Berland shlit”a, they’re torturing him for a year and a half in prison — he still hasn’t been tried, and everyone is afraid to protest.  Now, they brought the Rav to the district [court] with a mobile intensive care unit.  [He needed] intensive care inside the courthouse.

“Rabbi Amos screamed — he’s on video — he screamed: ‘If [people] don’t protest the [insult] to the honor of Rabbi Eliezer Berland, there will be a tragedy a 1000 times greater.'”

The last time that they disgraced the Gaon and Tzaddik Rabbi Eliezer Berland shlit”a and disgracefully brought him on a stretcher to the district courthouse, three days later, to our sorrow and grief, the terrible tragedy in Meron took place.  250 kosher Jews who came to the holy hilulah of Rabbi Shimon in Meron left the holy place in stretchers on the way to the hospital.

“And the earth opened its mouth”

Rabbi Eliezer Berland shlit”a said in the past regarding parshas Korach:

“Korach was assigned from Heaven an awesome role — Hashem gave him the talent of speech, to be a speaker with the highest kindness in order to unite and strengthen the people, that they should return to believing in Moshe Rabbeinu.  Because he knew well who is Moshe Rabbeinu; he just couldn’t overcome his jealousy and hatred.”

And behold, parshas Korach arrives, the parasha in which scripture teaches us about the difficult dispute of Korach and his group against Moshe Rabbeinu, and once again Rav Berland shlit”a is brought to a hearing bound to a stretcher and covered in a tallis, and what is the response?

At the same time, exactly at 1:59 pm, in which the stretcher left the courthouse into the ambulance on the way to the hospital…the earth opened its mouth in the parking lot of Shaare Zedek hospital in Jerusalem, and swallowed whole cars and giant trees.

Only through a great miracle was a tragedy of giant proportions prevented:  Aharon Miller, a Magen David Adom Paramedic who stood at the location at the moment of collapse and was miraculously saved, related to Yossi Shtark that through Heavenly mercy a terrible tragedy was prevented: “If the sinkhole had opened up a short time later, at the period of the changing of shifts at the hospital at 3:00 pm, there would have been tens of casualties, God forbid.  We’re talking about mamash a miracle.”

[God] is showing mercy to us and hinting to us so that we should understand… This is too exact and deep to be a series of coincidences.  This happens exactly in parshas Korach where it talks about 250 heads of Sanhedrin’s who dispute and disgrace Moshe Rabbeinu, and the conclusion is already known…

Am Yisrael, the merciful — we must wake up and pray that the controversy will end — the disgrace, incitement and oppression of the Tzaddik, foundation of the world, Rabbi Eliezer Berland shlit”a, while everyone is silent.

Because, “[Even if] the Rav forgives [disgraces to] his honor, [disgraces to his] honor are not forgiven [by Heaven]” (Kedoshin 32a)…