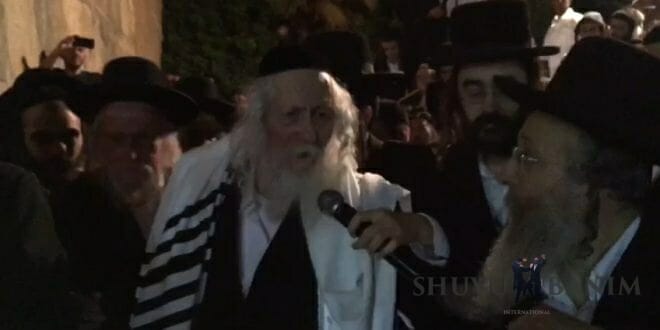 Rabbi Eliezer Berland gave over a hugely important message about the war of Gog and Magog on Thursday (June 6th, 2019) night’s prayer gathering, which saw thousands of people come to the holy city of Hevron to join together in prayer with Rabbi Eliezer Berland.

“Today is the 4th of Sivan [5779], and Gog and Magog will be in [the month of] Heshvan. All the nations will gather together against Israel. Moshe will blow on the Shofar HaGadol (the Great Shofar), and the whole Torah will be heard from one end of the world to the other.

Then, all the nations of the world will come. They will come on ships.

“We need to not give up. Everyone repeat, ‘it’s forbidden to give up’. And then, the Temple will be built that will never be destroyed ever again.”

These are the words of Rabbi Eliezer Berland, shlita, at the ‘Matan Torah’ prayer gathering that took place on Thursday night, June 6, 2019, with thousands of people in Hevron.

You can see the video of Rabbi Berland giving over this shiur yourself, below: