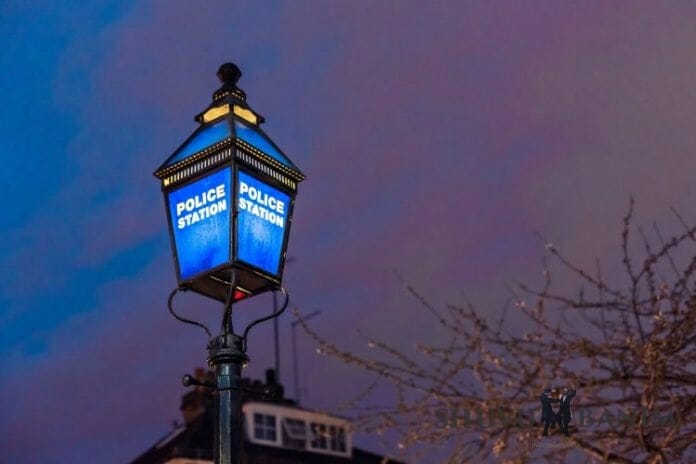 Just as I left on an errand in the car yesterday, a good friend I haven’t spoken to in about three months called me. Usually, I’m more careful about talking on the phone when I’m driving in the middle of Jerusalem.

Usually, I also rely on the fact that my simple, kosher phone is small enough to kind of blend in with my steering wheel. But yesterday, I was in a rush to get to my appointment, and I was excited to speak to my friend – and I forgot that police drive around Jerusalem a lot, especially up and down Derech Hevron, by the Old City walls, just waiting to catch terrorists and naughty housewives.

So, when the cop car pulled alongside me, and the cops inside motioned for me to wind down the window, I already knew what was coming.

After all, I still had the phone in my hand, and I still had to explain to my poor, panic-stricken friend that I had to hang up now, as the cops had busted me.

We pulled into a side road, and while I was fumbling for my driver’s licence, I managed to remember to say ‘thank you’ for getting another routinely horrible interaction with the police, and the massive, 1,000 shekel fine that seemed to be inevitably coming my way.

We got off to a really bad start. I couldn’t find the car’s registration document – and I just kept waving the insurance documents in the lady cop’s face, asking her in English, ‘is this it?’ No, it wasn’t it. But I had no idea what ‘it’ looked like or where it had got to in the meantime, so I was thinking to myself

Great. Not only was I caught red-handed, I can’t prove I even own the car I’m driving so recklessly…

We are the guilty ones

What could I say? I’d clearly been talking on the phone, in clear contravention of the stupid new law they passed about not holding your phone in your hand (even if it is a dumb kosher phone that really only ‘talks’….).

Just then, something I read from Rav Berland popped into my head.

In one of the Rav’s recent shiurim, he’d been talking about the brothers, and how they’d sold Joseph down the river, and how the whole test that Joseph put them through was only so they’d finally admit ashamim anachnu!

We are the guilty ones! We were jealous of Joseph, we didn’t believe that he was really a Tzaddik who was on a completely different spiritual level to everyone else, we suspected him of all sorts of disgusting things because we simply had no idea who he really was, or what spiritual imperatives he was working under.

God just wants us to admit that we aren’t perfect

All God really wanted was for the brothers to own up the fact that they’d actually done something wrong, when they sold Joseph into slavery 21 years earlier.

Now, spoken Hebrew is not my strong suit, but the police lady was looking at me, clearly expecting some sort of answer, or defense, to the fact that she was about to whop me with a massive 1,000 shekel fine.

So I told her:

What can I say? Ashama ani. I’m guilty as charged.

(I even managed to refer to myself in the feminine, which I was particularly pleased about, as usually I get all the verb endings mixed up.)

She looked at me with a strange expression, then told me:

I’m cancelling the doch. You can go. Just don’t do it again, OK?

I was literally completely stunned by how easily the fine melted away, and the usually horrible encounter with the police turned into the gentlest slap on the wrist.

Ashama ani! I was completely guilty. I was holding the phone in my hand and talking into it when I wound down the window to ponder what the police wanted to say to me…

There was no clever argument I could make, no excuse that was going to get me out of it. (And let’s not even get into the car registration being AWOL, which could have caused me a whole other headache, if the police woman was having a bad day and looking for reasons to stick more fines and aggravation on to me.)

Two little words can dissolve all our problems

As I drove away, I pondered on how easily our problems can dissolve, when we just stick our hands up and say guilty as charged!

How many kids could have been kept on the path, instead of off the derech, if their parents had stuck their hands up and admitted: Yup, we messed you up kid, sorry. We were more concerned with keeping appearances than with sincerely serving Hashem and working on our own bad middot (character traits).

We used you as an unpaid babysitter and housecleaner, we routinely put ourselves first instead of considering your needs and requirements, we laid way too many guilt trips and unreasonable expectations on to you, sorry kid.

Can you imagine how a statement like that, sincerely made, could completely transform the whole parenting picture?

Or how about that old friend, or distant relative, that stopped talking to you ages ago because you weren’t so nice to them? Imagine what could happen if you phoned them up and told them: You know that falling out we had? Well, it was all my fault. What can I tell you? I’m a bona fide crazy person. I’m sorry I hurt your feelings. I’m sorry I said what I said, and did what I did. Can you please forgive me, because I know I’m the guilty one, here?

Not for the first time, I got a glimpse of the amazing spiritual power that the Rav packs into every single world of his Torah lessons. Just those two words: ashamim anachnu, we are guilty, can literally change the whole world and bring geula all by themselves, if only more of us would get into the habit of saying them.

If they can get me out of a 1,000 shekel fine from the Jerusalem police, then believe me, they can do anything.