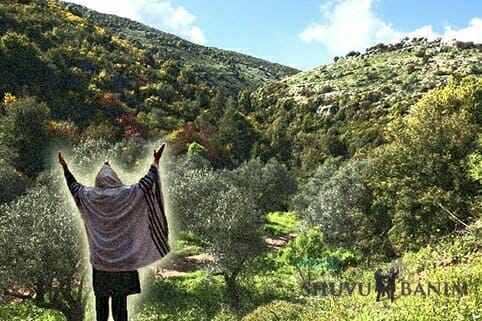 Testimony from a Jew named Yisrael Meir, who met in the Meron forest a hidden tzaddik, who foresaw the Meron tragedy shortly before it happened, and who revealed how to be saved from evil decrees in the future, that they, God forbid, shouldn’t happen.

These are the words of Yisrael Meir:

“I arrived for Lag B’Omer in Meron.  As known, this isn’t a simple time.  This is one of the exalted moments, the revelation of the true Tzaddik.  So I needed to go to the field to do hisbodedus, to prepare…  In the field I saw a Jew holding the Tikkun Klali and saying it word for word and his eyes were spilling forth tears like a faucet.  I’ve never seen such a saying of Tehilim.

“I asked him how he knows my name.  He answered that he knows, it’s ok.  ‘You prayed that you want to speak to me.  In Heaven, they accepted your prayer.’  I got excited and asked him [about] what does a person need to pray for now in Meron.  He answered: We need to pray that Rav Berland makes it to Meron.”

Breslov line: “Did he know that you were a chasid of Rav Berland?”

Yisrael Meir: “I didn’t tell him anything; he said by himself!  I asked him from where he knows Rav Berland?  He said that he doesn’t know him personally, but they have a spiritual connection.”

“How does one merit to say the Tikkun Klali like that?”

“I asked him how one merits to say the Tikkun Klali like him, like that, while crying?

“I asked: What can be done?

“He answered: If Rav Berland will come here, everything will be fine!

“After the fact, it was revealed, that when he said the Tikkun Klali, it was in the field opposite the place of the tragedy.”

“All the tzaddikim pray for Rav Berland every day”

“He said that he is praying for Rav Berland, and so [too] all the hidden tzaddikim pray for him every day.

He added:  In Heaven, every day, they announce that he is the Tzaddik of the generation.  Every generation has a tzaddik who is an aspect of Moshe, and there are other tzaddikim.

“He said: The hidden tzaddikim every day say several times the Tikkun Klali for the success of Rav Berland.  If all the Jewish people would join the prayers, they could sweeten all the decrees that there are, and prevent endless tears from the Jewish people, since Rav Berland fights above in Heaven with all his strength for the Jewish people.

“He spoke of the importance of saying at least once every day the Tikkun Klali for Rav Berland, and he who is able to, to say as many as possible.  In Heaven this is considered one of the most exalted things, those who pray for Rav Berland.  King David request from Hashem that saying his Tehilim should be considered like learning [the tractates of] Negaim and Ohalos, because Negaim and Ohalos are considered the deepest tractates.  All the more so, if a person doesn’t pray for himself, but for the tzaddik, this is already something completely different.”

“It’s a great level to pray together for Rav Berland.”

“If everyone gathers together to pray, then everyone multiples everyone else, like Rebbe Nachman revealed in the secret of the joining of houses — the prayer is something else completely.  When a person prays with other people this multiplies by billions.

“He said that Mashiach is already found amongst us in this world, and is working awesome things.  In the meantime, this is hidden until the time of his revelation arrives.  The tzaddikim know who this is and know that Mashiach is making things happen.”

“The secret of the prayer for Mashiach”

“There is a secret amongst the hidden tzaddikim, but because we are close to his coming and Mashiach needs the strength of the Jewish people, it’s therefore possible to reveal the secret.  We’re talking about an order of chapters of Tehilim which King David said about all the wars which he went through.  He went through endless wars all of his life spiritually and physically.

“There are chapters which the tzaddikim know that David put into them awesome intentions, that he intended with this the wars which Mashiach would wage in the world until the revelation of the redemption.  When saying them in a particular order it gives to Mashiach awesome power to work what he needs to in the world.

“The chapters which the hidden tzaddikim say for the success of Mashiach: 31, 35, 36, 60, 68, 80, 83, 88, 89, 109.  If we intend in prayer to give strength to Mashiach, he receives from this awesome strength.  Because the power of Mashiach is the spiritual power that he needs to receive from us, as is written in chapter 2 in Likutey Moharan, that the main weapon of Mashiach is prayer.

“At the end of that chapter it’s written that the Jewish people pray so much and don’t see salvation;  therefore, they error in thinking that the prayers don’t help.  But this isn’t so.  The tzaddikim take another prayer… until through an overwhelming number of prayers [God’s] mercy is aroused; and until the time of the redemption, what the prayers worked will be unseen.

“It’s written in Kokvey Or that the simple people who say Tehilim will place the crown on Mashiach.  The person who prays for Mashiach gains a lot more than one who prays for himself, because the role of Mashiach is to rectify all the souls, but in order to help, he needs to find a good point in the person.  He needs to find an ‘excuse’ for which to help the person.  With the prayers of each individual he can say, ‘Here, Ploni prayed for me; I owe him and have to help him.”

“When praying for Mashiach, he has the power to help us”

“Mashiach needs our prayers in order to help each person.  In Heaven, they expect each Jew and Jewess to join the prayers for Mashiach.  That we all need Mashiach and that there’s no one who prays for him could arouse an accuser — where are the Jewish people?  Why don’t they pray for Mashiach?

“One needs to know that there are very tough wars here, and in order to know what is happening here, one needs to learn Pirkey Hechalot Rabati from chapter 33 to chapter 38, which describe these years before the redemption.  He said that he who wants to bring merit to the Jewish people should publish Pirkey Hechalot Rabati in a volume with the above mentioned chapters, and distribute them to the entire Jewish people… that they should be aroused to understand the suffering of Mashiach.  It’s written there harsh things regarding what he goes through, and this is mamash bringing awesome merit to the masses, he who publishes and distributes for free to the entire Jewish people.  You don’t need to worry — there will be donators for he who takes it onto himself to publish this.

“There are things which he revealed, but told me not to publicize them, but gave permission to publicize that every prayer for Mashiach prevents tears from the Jewish people.  And the simple people who prayed in simplicity will merit to the greatest light, to put the crown on Mashiach.  It’s impossible to understand this, even though there are in our generation tzaddikim, gaonim who we have no comprehension of, but he who merits to pray every day for Mashiach, to think about Mashiach, will merit to the highest things.”

Yisrael Meir: “Yes.  He said: If Rav Berland arrives everything will be fine.  To our grief, we didn’t merit.  He said: The more people who pray for Rav Berland, the more he can sweeten decrees from the Jewish people…

“However great that Rav Berland is, he gives us small people the merit to pray for him.  For our sakes, Rav Berland wants us to pray for him, like when he requests a pidyon.  Money for him is worse than refuse, and whenever he asks for a pidyon it’s only to help a person.”

“Anyone who doesn’t take the opportunity will regret it, and it won’t help him… Now, they’re giving us the opportunity when there is concealment, and there is a choice — that a person could make light of this.  But when Mashach will come, everything will be revealed, and he who didn’t snatch [the opportunity], at least as much as is possible… Now is the opportunity.

“As it’s written in Kokvey Or, that those who say Tehilim in simplicity will be on the highest level…  These people merited when there was darkness and concealment, where there was heaviness and this was made light of.  When the level will be revealed [to all], there won’t be a reward.

“Every time that there is a prayer gathering, one needs to run with great happiness, and try to say with the community as much as possible…  Rabbi Nosson, the student of Rabbeinu, was a great gaon, but during the life of Rabbeinu, he would travel to him a lot, and be found by him a lot, in spite of, as it were, bitul Torah [neglecting his own Torah study].  After Rabbeinu’s passing, he said that he is sorry that he wasn’t by Rabbeinu more to hear the Torah of Rabbeinu, that this is what gives life to the Jewish people for ever and ever.

“Also for us now, there is this aspect.  Rav Berland so much requested that we pray… now, to pray for the Rav is higher than learning.

“A day has 24 hours.  We’re talking about saying a few Tikkun Klali’s.  How long does this really take?…  We need to snatch this; this is the greatest treasure that we have now.”

See the video (in Hebrew)