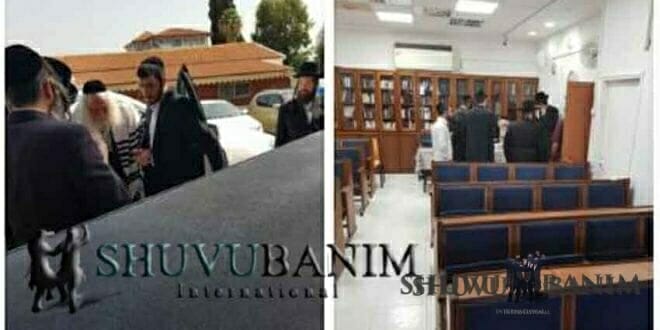 Despite the very warm feelings these two tzaddikim yesod ha’olam (foundation of the world) have for each other, for a number of different reasons they have never been actually able to meet each other face-to-face – until now.

Those close to both Rav Berland and Rav Abuchatzeira, shlita, knew that the two tzaddikim were very keen to meet each other, and their recent historic meeting was especially prompted by Rav David Abuchatzeira’s desire to express to Rav Berland in person his warm feelings and great personal respect for him.

Throughout the visit, Rav Abuchatzeira, shlita, showed Rav Berland the greatest respect, including stopping his audiences with the general public at his home for 15 minutes, during which time he only spoke with the Rav.

It’s widely known that Rav Abuchatzeira has very rarely, if ever, put his public audiences on hold while receiving other guests.

After these two tzaddikim left the room where they’d been conversing and studying the deepest secrets of the Torah privately together, Rav Abuchatzeira then asked Rav Berland to step into the adjoining beit midrash, to learn something in the merit of Rav Abuchatzeira’s holy forefathers, including the Baba Sali, z”tl and the Baba Meir, z”tl.

Translation: “He is entirely Torah! We merited to have a completely pure person come to visit with us.”

“I need to give you a pidyon (redemption). You are the grandson of kedoshim (holy ones).”

Later on Rav Abuchatzeira also mentioned to Rav Natan Bensasson, Rav Berland’s gabbay that he was:

“Connected to the purest of pure.”

Below, we’re pleased to share some pictures of this historic meeting with you: