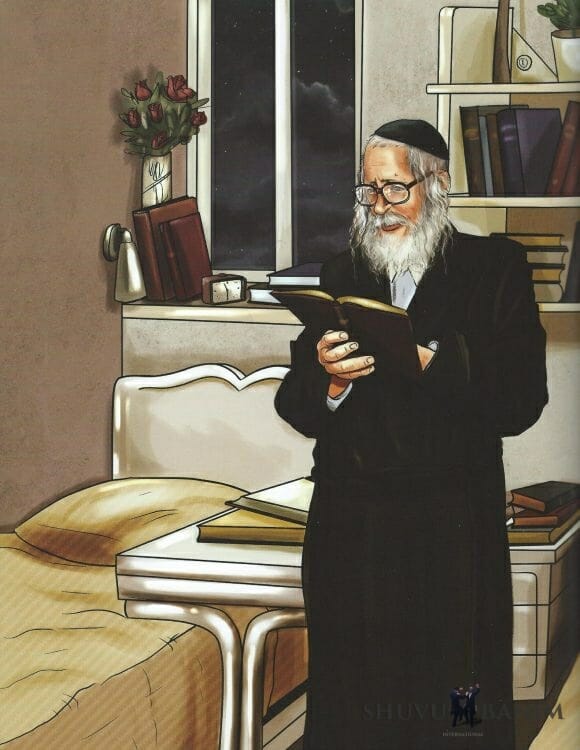 One of the wars that the Rav fought since he was a young bachur was to study Torah for long hours while standing on his feet.

To a person looking from the side, it looked like inhuman behavior. How can a person stand on his feet for so many hours? Also when older? And while learning so deeply?

The next story happened at the end of a most busy day, when the Rav studied Torah all day long and received visitors during the evening hours. After a while he participated in the simcha of one of his students.

Late in the evening the Rav returned to his home exhausted. The Rav entered his room and his family members were certain he was about to get a short night’s sleep to gather a little strength to serve the Creator. It was his custom to wake up to pray at chatzot halaila (halachic midnight). But that did not happen. The Rav approached his bed and while standing next to it, took a Gemara from the table. He opened it in front of him, and began studying in a standing position. He pushed tiredness and exhaustion away from his weak body.

Suddenly his pleasant voice was heard by one of the family members singing and praying. The family member was surprised. Is the Rav not sleeping? The family member rushed into the room. To his surprise he noticed that the Rav collapsed onto the floor from weakness. “Oy! The Rav fell down!” cried the boy. He rushed to pick up the Rav off of the ground and lay him onto the bed.

However, the Rav’s weak body was unable to keep up with his mighty soul. The Rav insisted on continuing to study while standing. The family members who entered into the room begged the Rav to stop studying for the sake of a short rest. However, the Rav did not listen to them. He continued to hold the book until the sun rose. Then he prayed Shacharis. Then after praying he took compassion upon his weak body and took some rest.

Also, later, a doctor warned him not to stand on his legs for a long time, because he was risking his health. Something was wrong with his leg. Still, he did not want to change his custom of standing from the beginning of the prayers to the end.

What did he do? He put a shtender in front of him and he stood with most of his weight leaning on his healthy leg, using the shtender for support. It took a lot of strength to stand there like that. However, the Rav was never afraid to try hard, above and beyond his strength, and he concentrated only on doing Hashem’s work.