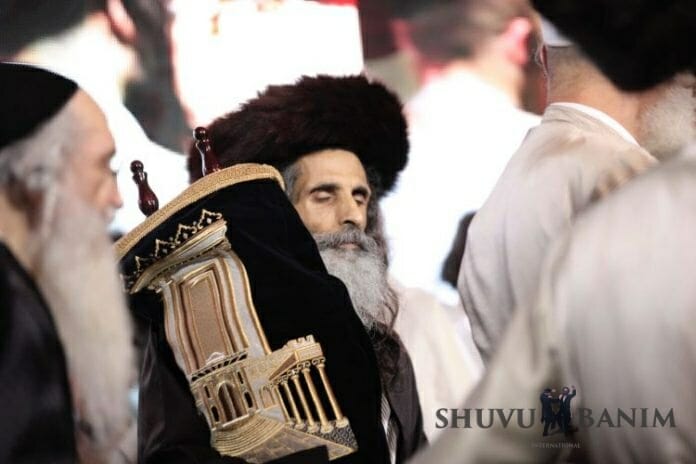 We are all searching for holy advice and the correct ways to do teshuva and to ascend in Avodas Hashem, every Jew in his place.  In an awesome shiur given over by Rav Moshe Tzanani, a light of holiness and yiras shamayim descended upon us.

A must shiur for every person and those around him.

The holy shiur began with the question of Rav Yaakov Salma to Rav Tzanani:  “The Baal HaTanya says that a person who unwillingly didn’t put on Tefillin should put it on at night without a blessing, so that he won’t be in the category of ‘a head on which Tefillin wasn’t placed.'”

Rav Tzanani answered, “Every spiritual fall that comes upon a person is to awaken him to do teshuva, because a Jewish person feels inside himself when he’s not all right.  You need to know that everything [we do] is immediately written on high.  We don’t live in a lawless world.  You have no idea to what degree everything is written above…’An eye which sees, an ear that hears, and all your deeds are written in a book’ (Pirkey Avos 2:1).  There is a book on high in which it’s written everything that a person does, and at night he ascends and signs on every single thing.  When a person leaves this world, they show him the book with his signatures on every one of his deeds.

“Therefore, we need teshuva for every single thing.  If a person does teshuva, then they forgive him.  They don’t mention to him those things on which he did teshuva.  A person doesn’t know from where his suffering and fears come — everything is because of his deeds.

“In actuality, this is all for the best, because they want to give a Jew a great reward on high, but it’s impossible to come on high filthy [from sin].

“Also, one’s thoughts are written on high, and they create angels.  It’s written about a person who sins and has thoughts of teshuva, that after his death he descends below; but when he screams to Hashem, they bring him up through the power of his thoughts of teshuva and the regrets which he had.”

“Above, there really is a scale of mitzvos versus sins.  This isn’t a child’s tale — the suffering [one goes through] is also adjoined to [the side of] one’s merits.  One needs to do teshuva [that is] on a balance, so that there will be great bitterness that is measured opposite the amount of pleasure which he had from the sin.  But if a person is by the Tzaddik, then the Tzaddik does for him awesome rectifications, so that a person can erase everything and be completely cleansed [from sin].  But even by the Tzaddik a person needs to try and to make efforts.  A person for instance must guard his eyes.  People think that the Tzaddik is like a magic formula, but this isn’t so.

“In a little while, there will be the War of Gog and Magog.  It’s impossible to describe what’s going to happen.  Hashem will manage the wars, Mashiach, ‘The kings of the land and rulers will stand and conspire together against Hashem and His Mashiach…Hashem sits in Heaven and will laugh, [He] will ridicule them’ (Tehilim 2).  Hashem will laugh at the wicked, but the spiritual war is ours, the Jewish people.  [Hashem] wants us to not give up.  How much a person merits if he struggles, even if he falls!  If he continues to fight, he makes more and more [spiritual] vessels.  ‘The place which baal teshuvas stand even complete tzaddikim can’t stand’  (Bavli Brochos).

The Great Flood [of Noach] alludes to our period.  Today the war is terrible — judge yourselves on the side of merit.  A person persecutes himself needlessly — but Above they appraise him differently.  We live in an extremely difficult period spiritually.  Rebbe Nachman says about our generation that just to be a kosher person will be like climbing up a smooth wall.  There is great darkness spiritually.  Therefore, they give us great abundance materially, because every tiny lack drives a person crazy, because a person has no mind.  The Ramchal explains that before the coming of Mashiach there will be almost total darkness — automatically when the lights departs all the wicked will take over.

“But this is our gift, that a simple Jew can merit to Ain Sof (the Infinite); just don’t give in to lusts — don’t permit yourselves lawlessness.  In Sipurey Maasios (Rabbi Nachman’s Stories), Rabbi Nachman tells us about the king who went hunting and all of his ministers forgot him.  Only a single villager in a small hut received him warmly.  Suddenly, the ministers remember that the king isn’t with them, and they search to bring him back, but the king says that only the simple person who stayed with him will bring him back.  Those who will bring back the King are the simple people, the baal teshuvas.  ‘From the mouths of babies and nursing infants You established strength’ (Tehilim 8:3) — these are the ones who will stay in the end with the Mashiach.

Rebbe Nachman in Torah 8 in Likutey Moharan says that the time when baal teshuvas are made, thunder and lightning are created — this is the light of the Redemption.  You dwelled in such lowly places, and now do teshuva…this makes a great commotion in Heaven and draws down the light of redemption.  ‘He who is more sanctified than his fellow, precedes his fellow’ (Mishnah, Horayos 3:6) — the more lofty a person’s soul, the more lowly places he fell when he descended to this world.  For several reasons, the evil inclination knows that he can siphon off more lifeforce from him.  Also, this is intentionally [done] by the Creator Who brings downs the loftiest souls to wrestle with the evil side, and through this He destroys [the evil side].

“This is exactly the reason they are fighting against Rabbi Berland shlit”a.  Because all the accusations against him are nonsense.  Their fear is because the Rav gets so many people to do teshuva.  The Evil Side knows that the minute that the Rav takes those souls away from it, it will immediately cease to exist — [this is the reason] for all Rav Berland’s self-sacrifice to make baal teshuvas.  From where are all the masses of Baal Teshuvas?  Everything began with Rav Berland, or with those that he sent to get the Jewish people to do teshuva, or by way of Uman and the Rav’s self-sacrifice in opening the way to there.  There the teshuva began.  True, there were others who had influence and did keruv, but the main teshuva Rav Berland and his yeshiva [were responsible for].

“The entire goal of Amalek, the evil inclination, is to make a person fall to despair and depression.  We need to [sit in] a corner and request from Hashem that He reveal to us the truth, not the liar which the evil inclination wants us to think [like].  Suddenly, such words of teshuva come to a person in the midst of spiritual arousal…

Listen to the shiur below (in Hebrew):

Rav Moshe Tzanani Shlit”a: How to Win the War Against the Evil Urge

David Simcha - January 10, 2022 0
“A short time before they arrested the Rav, the Rav said several times, that G-d forbid, he is going to sit in jail 12 years.  They were many who heard this.” Awesome testimony about the...
Read more

“Only Through Nullification to the Tzaddik is it Possible to Enter the Land of...

David Simcha - January 9, 2022 0
Shiur of our Rebbe Rav Eliezer Berland shlit”a – 3 Shevet 5782 “’Then who and who are going?’  Because Pharaoh was an astrologer, the cleverest person in the world.  He saw from one end of...
Read more

David Simcha - January 9, 2022 0
Shiur from after the Maariv prayer of our Rebbe Rav Eliezer Berland shlit”a – the evening of 18 Tevet. “Then tomorrow at 4:30 in the morning, open the shoemaking shops.  Everyone will begin to...
Read more

David Simcha - January 6, 2022 0
Well-known outreach rabbi Rav Yisrael Sharet shlit”a, who came to the occasion of the release of the Rav, with fiery words about the greatness of our Rebbe, the Tzaddik Rav Eliezer Berland shlit”a. The interviewer...
Read more