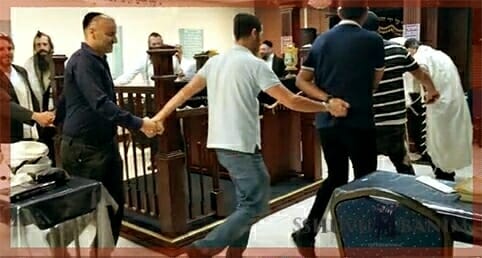 “Promise that you will travel to Uman, and you will already see salvation”

Rav Yossi Naftali, the businessman who is very close to our Rebbe, the Gaon and Tzaddik, Rav Eliezer Berland shlit”a, in his incredible story of drawing close to Judaism and the Rav shlit”a.

Rav Yossi Naftali has done and does a great deal for everything involving the Rav shlit”a in Israel and the rest of the world, being entrusted, under the Rav’s instructions, with the establishment of the giant project of the “Shuvu Banim” Breslov Center in Miami.  It was very hard for Yossi to share his story, which is so personal, to the world.  Only after he understood that many people in the world are thirsty to know just how much being close to the Tzaddik works miracles, he acceded and opened up.

These are his words:

I’m with the Rav since 2008, eleven years exactly.  Really I was married to non-Jewish women.  I lived here in Miami, in South Beach.

One day, I decided that I’m finished with these non-Jewish women, and behold, after forty days I met my wife, baruch Hashem, a magnificent woman.  We got married, and when we got married, I started to keep Shabbat.  At that time, I had a partner who was married to a non-Jew.  He didn’t accept that I wanted to keep Shabbat, and we had many arguments and disputes.

After a few months, I said to my wife, “Let’s travel to Israel.”  We travelled to Israel for Chanukah.  We were with the small girl who was born to us.  I was already a year in teshuva (returning to Torah and Mitzvah observance), but such teshuva [that I] only kept Shabbat.

I came to the Kotel.  I was in a crisis because of the partner.  I didn’t find a place to park.  My cousin said to me that he would put on the telephone a kollel student.  He put [on the line] for me Rav Moshe Kohen who let me enter the Kotel.  Then he began to pester me about Breslov and Uman.  I said to him, “Listen, this isn’t for me.  I’m Sephardi.  I’m not interested in Uman.  I’m not interested in Breslov.  This isn’t me.”

He said to me, “You have a problem?  Come [with me].  I’ll take you to our yeshiva here.  Come and see.”  It was a miracle that my wife agreed.  She said to go.  She waited with my mother and the daughter at the Kotel, and I went with Moshe.  He showed me the yeshiva, brought me up to the roof, and had me do the Tikkun HaKlali.  This was four in the afternoon.

I won’t forget this.  There was the wind of Jerusalem.  I did the Tikkun HaKlali and began to cry.  I don’t understand what’s happening to me.  I’m flying.  He says to me, “I told you – this is Breslov.”

I answered him, “But I don’t accept this.  We’re Sephardim.”  I opened up to him, told him the story about my partner.  He said to me, “Listen, I have a Rav, Rav Eliezer Berland shlit”a.  I’ll take you to him, to HaHoma HaShlishit.”

This was eleven years ago, in 2008.  He said to me, “He’ll work everything out for you.”  What sort of “working out”?  Today there is a fall in America.  At the time there was a fall.  I answered him, “Who will pay me money?  I need money to get out of the business.  I’m ready to give the business for free.”

I reached a situation where I’m with the partner who’s married to a non-Jew, and all day he plots against me.  He’s doing it to [me] intentionally because I returned in teshuva.  It was hard for me to accept this.  We didn’t understand what is Breslov and humiliation during that period.  We were at a boil.

He calls me and says to me that the Rav is waiting to see me tomorrow at eight.  I arrived.  The Rav is standing for me like this…turns around, says to me, “Wow, wow, wow, how much time I’ve been waiting for you Yossi, Yossi, Yossi, my beloved.”

I didn’t understand what he wants.  I said, “What’s with him?  Is he not normal?”  I asked, “Is it possible to sit down?”  He told me, “No.  I know your problem.”  He took his yellow paper and began to write a prayer for me.  “Say this, and if you promise that you will travel to Uman, I will sell the company for you.  You will have money to exit the company.”

“Wait a minute.  Let me explain to you…”

“I don’t need you to explain to me.  Promise me that you will go to Uman.”

I said, “Maybe on Rosh Hashanah.”

This was Chanukah,  He said to me, “Rosh Chodesh Nisan you travel to Uman.”

“If you go to Uman and read this prayer, you will reach Miami, and your company will be sold.  You will have a profit of several million.”

I went out and said, “What type of Rav is this? He didn’t even allow me to sit there.  Everything standing.”  I didn’t understand what he was saying.

A week I was in Israel.  The week was over.  I went up on the plane, arrived in New Jersey, on a continuing flight to Miami.  When we reached New Jersey, I opened up the telephone and received a letter: “Mr. Naftali, this is the lawyer of your partner speaking.  He put up such-and-such millions.”

Immediately after Uman, the Rav said to me, “Just promise that you will travel to Uman.  The moment that you land in Miami, your company will be sold.  You will have just landed in New Jersey and it will have been sold.”  I wanted to give the company as a gift.  I couldn’t get up in the morning anymore.  My wife is witness.  I said, “I can’t live with this person.  He’s ruining my life for me.  This isn’t simple.”

I called the Rav and said to him, “You are my Rabbi.  You saved me.”  It doesn’t matter that after this, I received three years of insults.  After this, there were more ascents, there were more descents.  The Tzaddik only wants us to be in humility.  He’s not interested in money.  He’s not interested in anything.  Don’t become arrogant.  You don’t do anything.

We merited to understand that the Tzaddik works in such a manner that you don’t do anything.  I didn’t open up this Breslov.  I just lost hope – I’m telling you the truth.  I was in despair.  When I reached such great despair, the salvation arrived.

I didn’t believe what the Rav said – do you understand?

Chai Kampo, Now in the Conversion Process, in an Amazing Story of How the Tzaddik Drew Him Close

Rabbi Berland Saved Me in the Middle of the Shemoneh-Esrei