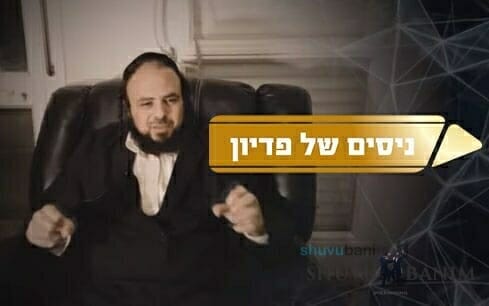 The power of a Pidyon! – Chilling eyewitness testimony of a man who did a Pidyon Nefesh by Rav Eliezer Berland shlit”a for his father who was ill with cancer.  He tells us what the Pidyon did for his father:

Five years ago my father became ill with cancer and I decided to do a Pidyon by Rav Berland shlit”a.  They said the Pidyon is 10,000 NIS.  I asked if it was possible to divide it up into twenty payments.  The Rav shlit”a agreed.  The payments for the Pidyon began, and the cancer disappeared and returned — over and over again.  After 21 months my father passed away.

Two years ago, my brother began to meet with a medium.  In one of their meetings, she said that a woman was present in his house.  He asked about her, and the medium answered that she died a month ago from a heart attack, and she knows him because he went out with her friend a month earlier.

After the meeting, my brother called the woman who he went out with a month ago and asked about the friend who the medium said had died.  [She replied,] “Don’t ask, she died a month ago from a heart attack.”

Two weeks later, in an additional meeting with the medium, she told my brother, “Now, the 10-year-old daughter of the neighbors who was run over on her bike outside the house entered through the balcony door.”  The following day, by chance my brother met the mother of the child and asked if she had a daughter who had died.  She confirmed that she had a 10-year-old daughter who had been run over on a bicycle and was killed.

Several other stories such as these which my brother experienced with the medium were verified by my brother.  On Erev Pesach two years ago, my father revealed himself to the medium when they were in a meeting.  She started telling him things that were only known to family members, and there’s no way that she could know them.

Erev Shavuos, my father returned.  This time the medium asked him what the Pidyon did.  You need to understand that my father kept “half” of Shabbat.  That is to say, that on one hand he would turn on the light and air conditioner, but he wouldn’t smoke or travel on Shabbat.  My father answered the medium, “The decree was impossible to cancel, but the Pidyon sweetened my suffering.  I would have had to go through much worse suffering.”

My father continued, saying that they let him straight into Gan Eden and he didn’t have to go through Gehinom at all.

Watch the video (in Hebrew)

The boy who came back from the dead