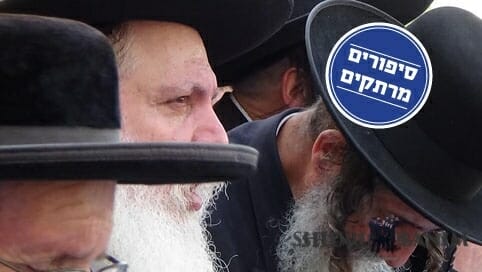 This is the true story of how Rav Michael Goll, head of the ‘Maginei Aretz’ yeshiva and one of Rav Berland’s oldest and well-known students, came to be his follower. The original interview was recorded on the 28th of Av, 5778 (2018).

“There was a tradition amongst the Breslov elders that a person would only speak publically to the community, if there was no risk of him aggrandizing himself, over his friend. Rabbi Nachman of Tultchin (also known as Rabbi Nachman Chazan (1813-1884), who was one of Rabbi Natan of Sternhartz’s leading pupils), was Rav Natan’s main shamash (attendant), during the main period of time when Breslov chassidut really started to grow, during the 19th century.

He wouldn’t agree to speak if Rav Nachman from Tcherin (also known as Rabbi Nachman Goldstein, (1825-1894), the Baal HaParparot, who was the Rav of the Ukrainian town of Tcherin, and another of Rav Natan’s main students) was present. He used to leave, and go to his room. So the Rav from Tcherin used to come into the room secretly.

Moranu Rav Berland once said about the Rav of Tcherin that he was most lamdan (learned man) of his generation. It was only because he was also a Breslover chassid that this wasn’t more widely known.

Every hint of teshuva starts with the Tzaddik

It’s really a wonder of wonders, how the Tzaddik plants thoughts of teshuva in a person. Today when I look back, I think of Rebbe Nachman’s words that:

“Every thought of teshuva in the world is derived from me.”

Moranu Rav Berland always used to remind us of this, that we will go through a lot of things, until we understand that our wish to make teshuva came from the Tzaddik.

Another wonder of wonders is that my son always used to ask me to tell the story of how I came close to the Rav, and I never told him, so even my own family members don’t know it.

The story begins with my big brother, who from a very young age was always trying to search for who he really was. There are three years between us, and while the other kids my age were busy with all the vanities of this world, I found myself listening to him very attentively.

It really began in that period of time when my brother was doing his army service. He had a friend on the army base who was into all the different types of meditations, and things like that. My brother was very taken with the idea, and he carried me along with him, but he really did it heart and soul, while I kind of recoiled from it. I felt that it contained a point of truth, that the whole world really was just ‘vanity of vanities’, and that a person did need to aspire to be more spiritual.

The treasure is really to be found at home

But, it was still really hard for me to completely disconnect from the world, and all the materialism. I don’t want to dwell on the subject for too long, as Rabbenu tells us that each religious cult and group has its own methods and beliefs, and that we shouldn’t dwell on them. They possess a power to attract those people who are searching for spirituality, but who are still very far away from Judaism, as Rabbenu hinted to in his tale of the treasure that was meant to be buried under the bridge in Vienna.

(Incidentally, I heard that the teacher who pressured my brother to move to the secular school was later diagnosed with cancer.)

‘There’s nothing to worry about!’

My parents were very worried about it, but he told them there was nothing to worry about. “You have a wise, strong son, who won’t be influenced by the bad.” That’s how he persuaded them. But really, how could an innocent and naive 14 year old boy really manage such a huge heaping dose of teenagers in the Herzliya Gymnasium, who all came from such ‘enlightened’ homes?

When my parents saw what a terrible influence it had on my brother’s spirituality, they wouldn’t agree for me to move there, too. In any case, we grew up the sort of home where religiously, we knew about the prayers, etc, but no-one really had much else to tell us. And then suddenly, we heard all these new, powerful ideas about spirituality [from a non-Jewish source], and it attracted my brother very forcefully.

My parents weren’t so bothered about it, initially, until the words of Rav Ovadya Yosef were publicized (on the subject of non-Jewish meditation and Eastern religions), when they suddenly realized that what was going on wasn’t as innocent and simple as it seemed.

I remember that we took my mother to one of the events, and she just sat on the chair and dozed off. At the end of the evening, after the last lecturer and finished speaking, that’s when she opened her eyes. We didn’t feel so comfortable about that, but with hindsight, I realized that the merit of her forefathers had protected her from hearing all the nonsense they were talking there.

You need to pray for your children

All of a sudden, they tried to get other professionals who were connected to the subject involved in what was going on. Then my father’s mother appeared to her in a dream and said to her: “In all the synagogues, there’s a big noise, and people are praying, so why aren’t you also praying about what’s happening with your children?!”

This really made a big impression on my mother, and she started praying about what was happening. Meanwhile, my father experienced another wonder of wonders: Someone he knew told him to speak to ‘Yad L’Achim’, but when he contacted them they told him that they were really more involved with working with younger children, and not young men.

I remember how my father was crushed by this response, and he stood by the mezuzah, with tears in his eyes, saying:

“Ribonu shel olam! Master of the World! Have you also slammed this door in my face?”

“The turning point came when my parents thought I was asleep one night, but I heard my mother speaking to my brother (who by that time was already married), and begging him to leave the place where he was then living. He told her that he was just looking for the truth. “Really, show me that the truth is in some other place, and I’ll go there!” he told her.

My mother tried to persuade him by saying we were Jews, and I remember that after I heard this, it was the first time that I really tried to pray to Hashem from my heart. All my life, I’d been praying shacharit, mincha and ma’ariv, but I’d never even felt even once that I was really praying to Hashem.

I remember I paced up and down, and how I really cried out to Hashem from the depths of my heart that He should show me what was really true in the world, and what I should really be trying to come closer to. I didn’t even phrase it as being connected to Judaism, at that point. I was talking more about knowing what I needed to do to become a ‘whole person’, that’s how people phrased it, back then.