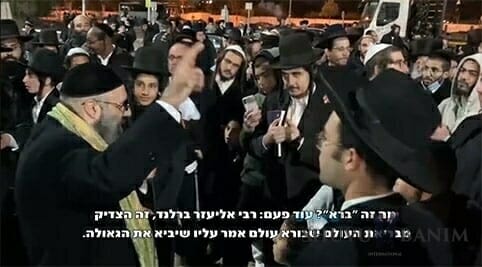 The Tzaddik Rav Tsionov shlit”a, from the Beis Midrash of the Kabbalist Rav David Stern shlit”a of Bnei Brak, and among the few who regularly gives lessons there, in strong words about our Rebbe Rav Eliezer Berland shlit”a.

“Shalom to all the tzaddikim, with the permission of Rav Berland, the greatest Tzaddik since the creation of the world where his soul is present, as I said to him several times when we came to him: What is this ‘BREiShEiT BaRA’ [In the beginning (God) created]?  ‘BREiShEiT’ is the initial letters of: Rabbi Eliezer Berland SheYachzir (that he will return) Yisrael Teshuva (in repentance).

“What is ‘BaRA’ (created)?  Again: ‘Rabbi Eliezer Berland.’  This is the Tzaddik from the time of creation, whom the Creator of the World said about him that he will bring the Redemption.

“But what does the Tzaddik always show to us?  Submission!  He wants submission in the world!

“How does one merit to submission?  What Rav Berland has – from the year 5760 he became famous in the world through that saying which he said, ‘There are no wicked people.’

“Because what is “ReShAYim” (wicked people) in initial letters?  Ribono Shel Olam, Yavo Mashiach [Master of the World, Mashiach will come].  The Gemara says, ‘The Merciful One exempts one who is coerced.’  Not [that people act] through error.  Everyone, everyone is coerced.

“How will this happen [submission]?  Through Rabbi Eliezer Ben Etiya!  What is ELIEZeR in initial letters?  “Ayin Lo Ra’ata, Elokim Zulatchah” [No eye has seen it, God, except for You], because this is a good eye [seeing people favorably].

“Rav Berland has a good eye for everyone.  If we want today the revelation of Mashiach, what does Mashiach want in the world?  Not to see evil in the world, even about a gentile.  Rabbi Chaim Vital said:  You need to love the gentiles, because it’s not them.  Everything is [from] the Creator of the World.

“’Ben Etiya’ – what is ‘ETiYA’?  ‘Ayin Tova Yiyeh Hayom’ [A good eye will be today].  If we are ‘one gathering,’ as the Zohar says in Parashas Noach, everyone should only see everyone [else] with a good eye.  Not to talk about anyone else anymore, not for good, not for bad.  Everyone should always say that everything is [from] the Creator of the World.

“The entire process that the Rav did for us [is] because he knew that only through this we would reach this day, Tet [9] Adar.  ADaR is the initial letters of ‘Ain Davar Ra’ [there is nothing evil] – we don’t see evil.  And Tet Adar is Tova [good], that we should have a good eye.  Then we won’t say, ‘We should merit to redemption.’  Rather, as the Rav says: Today is the Redemption.  Everyone will feel this on the way, one about his fellow with love.

“No one should talk any more in his life about anyone else – love everyone.

“Rav Berland today already is coming out – and will lead the entire world to a good eye, to attachment to the Creator of the World.”