Over two years ago, the Kretshnif Rebbe of Kiryat Gat ztz”l, author of “Noam Yisrael” prophetically foresaw the spread of the microscopic virus which would disrupt and turn the entire world upside down, saying “Hashem alone will fight the War of Gog and Magog.”

In Parshas Miketz 5778 (2018) the Kretshnif Rebbe wrote that Hashem could bring down a virus, and that the entire world would be an aspect of “we were like dreaming” (Tehilim 126).

These are his holy words: “This is the meaning of ‘Pharaoh dreamt,’ that Hashem will bring to the world something that is like a dream, that [appears] to not exist, and which can’t be seen.  For example, Hashem can bring down a tiny virus and spread it throughout the world, and this will disrupt and turn the entire world upside down, through a ‘dream,’ in spite of all the technologies in our times, and all the nations of the world will be an aspect of ‘we were like dreaming’ and nothing will help them.”

The Rebbe ztz”l added: “This is what will happen in the End of Days–not through war, not through force or brainpower, not through the Iranians, and not through the Syrians, etc.  Rather, Hashem alone will fight the War of Gog and Magog.  “The horse is an illusion for salvation.  All his power won’t rescue…”  Rather, only one thing [will matter], ‘Hashem’s eye is on those who fear Him, those who long for his kindness, to deliver their soul from death, and sustain them in famine.  Our souls waited for Hashem.  He is our help and our shield, etc.’  Through the Jews returning and drawing closer to Hashem, they will be rescued and redeemed in the complete redemption.” 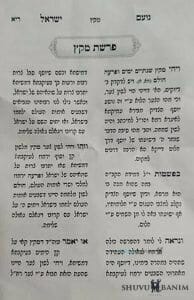 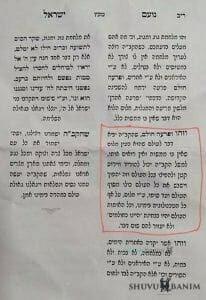 The Kretshnif Rebbe ztz”l compares the arrival of the virus which will disrupt the order of the world to Pharaoh’s dream.  It’s known that in the wake of Pharaoh’s dream, Yosef was released from prison.

In his comments on Bereishis 37:2, the Chasam Sofer explains: “‘Yosef was a shepherd with his brothers in sheep and goats and was a lad with the children for Bilhah, etc, and Yosef brought their slander [to their father]…’  That is to say, Yaakov gave him over to join the maidservants’ children to be a shepherd, and they turned him into a lad and servant.  This in itself is the slander that [Yosef] brought [to Yaakov].  And through this, it can be understand [what his brothers] said, ‘Shall you reign over us?  Shall you rule over us? And they hated him all the more for his dreams and his words.’  Meaning, it’s a tradition that we have in our hands that from prison he will emerge to reign.  That is to say, from the lowest level, the monarchy will sprout in the way of [what’s written] ‘from the trash heap He raises the poor’, [and] ‘the stone that the builders rejected [became the foundation stone]’.

“If so, since the entire purpose of Yosef and his slander was only because he didn’t want to accept upon himself his brothers’ authority–on the contrary, he wants to rule over them–how can he reign?  This is [what they say to him], ‘Shall you reign over us?  Shall you rule over us?’  This is impossible, therefore, ‘they hated him all the more for his dreams and his words’ because they have a double meaning.”  [Translator’s note:  It seems that the Chasam Sofer is trying to say that because Yosef’s brothers had in their hands a tradition that a ruler must first come from the lowest level before he rules, Yosef’s brother were saying to him that he was unfit to rule since he was unwilling to accept upon himself their subjugation. However, they didn’t know that later on he would be subjugated in an Egyptian prison, and through this he would be fit to rule as Pharaoh’s viceroy.]

Practically speaking, from the commentaries of the Chasam Sofer and the Kretshnif Rebbe, it emerges that the solution of the dream, that is the solution of the Coronavirus which has disrupted and confused the entire world, will occur through Yosef’s emerging from prison to kingship.  Because what Yosef went through will all happen to Mashiach, as the Chasam Sofer writes, “It’s a tradition in our hands that he will emerge from prison to reign…that is to say, from the lowest level the monarchy will sprout in the way of, ‘from the trash heap He raises the poor.'”

The words are easy to understand, because how can they just suddenly summon and take Yosef from prison after all his years in the pit?  This is through the dream that came “through chance” to Pharaoh which they had no solution to–only Yosef who was found in prison could solve it. 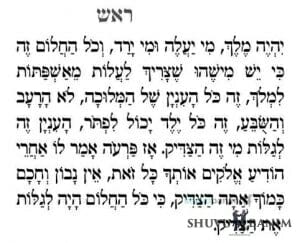 As Rebbe Nachman says, that just as the Tzaddik descends through one humiliation after another, so too will he merit to ascend to one greatness after another…So too the Midrash says, “Just as Yosef was rushed from the pit to receive kingship, so too was David rushed from behind goat and sheep…”

Rav Eliezer Schick about the war of Gog U’Magog