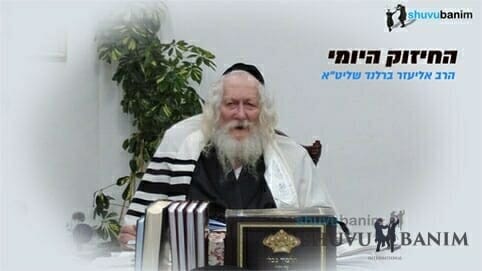 The Daily Chizzuk with our Rebbe, the Gaon and Tzaddik Rabbi Eliezer Berland shlit”a – “The iphone ensnares and prevents teshuva”

Wednesday, 23 Sivan 5782 – “If there wasn’t the iphone, everyone would have done teshuva”

The entire issue for every person is leaping into the fire – now, we need to throw away all the iphones, to leap into the fire.

The main thing is to leap into the fire like Avraham leaped into the fire.  Avraham merited through this to purify all the Israelites, and then he threw away his iphone.  Throw away the iphone, look for something kosher-kosher, completely sealed off [from the internet].

A telephone which is only for calling to dad, to mom, to some friend, and not for seeing forbidden films and immorality, and films which…, especially that they see immorality mamash, things which are forbidden d’Oraita (from the Torah).

You need to throw away all the iphones.  This is forbidden d’Oraita mamash.  This ensnares.  It’s impossible not to be tripped up.

[A person] sees a place which it’s forbidden to see, then already it’s over – his brain is burned.  He can’t return in teshuva (repentance) afterwards.

If there wasn’t the iphone, everyone would have returned in teshuva.  It can’t help him – his brain is burned.  He has no brain.  He has nothing.  He’ll only come to blows and do whatever he will do.

All those who begin with iphones afterwards come to blows, because they have nothing to do.  [They] only want to be strong.