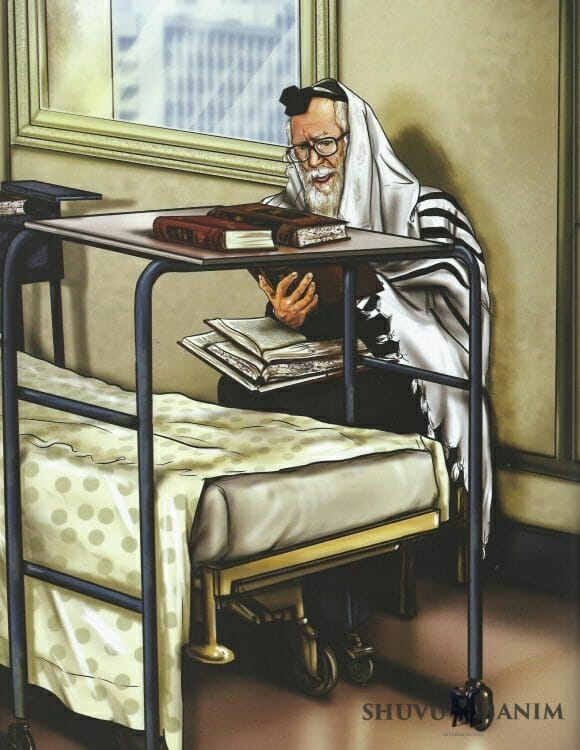 The Rav and the Rebbetzin were staying in a guest house next to the ocean. Every day before sunrise, the Rav used to go for a dip in the ocean water. One of the mornings when the Rav went for a dip, suddenly an especially strong wind came up, which hurled the Rav onto the face of the waves. The Rav’s body was thrown to the beach with so much force that his leg broke.

It was early and there was nobody around, so the Rav remained lying on the beach for a long time. Just then, a non-Jew who was living near the beach noticed him lying there. The man rushed to call an ambulance and the Rav was taken to Mount Sinai Hospital. Once there, the Rav was told that he needed to have an operation on his leg.

It was close to Erev Shavuot. The Rav was busy with a lot of work preparing for the festival of the giving of the Torah. He was concentrating deeply on his lofty thoughts when the doctor came in. The doctor wanted to put him under anesthesia for the operation. The Rav told him, “I will study Torah and sing songs so that you will not need to put me under anesthesia!” The doctor was shocked. He and his colleagues tried to explain to the Rav that they were talking about deep, intense pain. It would be impossible for a human to withstand this without anesthesia. However, the Rav stood by his word. Without any choice, the doctors started the operation without anesthesia. The Rav’s face burned like a torch on fire, and his lips mumbled with love and holiness the famous melody “Atah nigleita b’anan kvodecha” “You are revealed in Your Cloud of Glory.” This niggun is known for special deveikut (clinging to Hashem).

To the doctor’s surprise, the Rav did not say a thing. He did not express any pain or cry out during the successful operation. The non-Jewish doctors said, “All of our lives we never saw a person such as this.” “We cannot say anything except that he is a holy man of G-d.”

On another occasion, the Rav needed an operation with full anesthesia in order to remove a tumor from his body. This story shows how the Rav has deep love for Hashem and His Torah.

After the Rav awakened from the operation, he turned to his student who was standing near his bed and requested, “Please bring me the book “Ketzot Hachochen”.

The doctors were shocked. They expected the Rav to inquire about how the operation went or about his condition. The Rav noticed their wonder and made a motion with his hand. “It is very simple. If I woke up, it is a sign that I am alive. If I am alive, I still have to do the mitzvah of studying hard day and night. If so, please hurry and bring me this book to study.”

The Ravs Concern for Prisoners in Jail