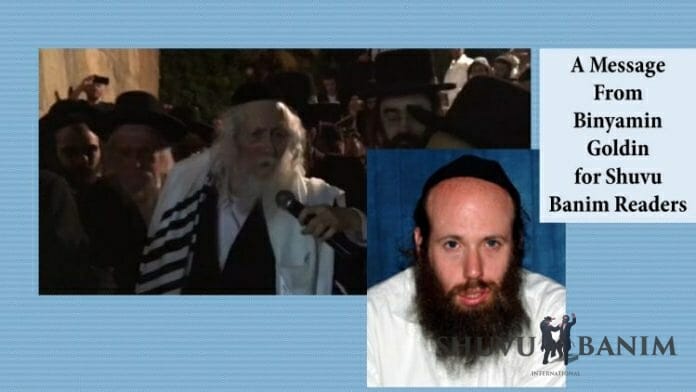 We were asked to publicize the following translated message from Binyamin Goldin.

Please read the haskamot on facilitated communication from Rav Shteinman, z’tl, before continuing, particularly in relation to the part where it says it is forbidden to rely on the words of the autistics for anything to do with predictions about the future.

I have a very important message for all of those Jews who live in places far away from Eretz Yisrael.

The time has come. I’m not Eliyahu HaNavi, no I’m not. But I’m going to warn you. This is a pre-warning. Very soon your secure homes and your cars and all your gashmius will be in danger. Big danger. The earth is changing. Wars all over the world are about to begin, and I will add that it will be with very scary bombs and missiles, etc.

Only a small few are ready for what is coming.

Bomb shelters won’t help. However, the elite that’s running the world, or who think they are running the world, their shelters are all ready. They are top of the line, the best there can be, technically advanced, much more than they’ve given to their population.

OK, I know you’ve heard this before, but now it’s coming to fruition. This is the time to make your move if you can, and if you can, you’d better do it. Because there’s going to come a time very soon where you won’t be able to get on an airplane and go flying to wherever you feel like. No, it’ll be very dangerous.

It won’t be easy to go to a restaurant to eat whenever you feel like not making breakfast or lunch or supper. No, there won’t be restaurants. Everything will change. The reality of life will change completely – and if you’re a Jew with a Jewish neshama, I suggest that you start making your plans in order to save your lives and the lives of your families.

This is the only place for a Jew to be at this time.

Now, Medinat Yisrael isn’t the best place to come to, especially if you’re a believing Jew. The government is trying to destroy yiddishkeit. They’re trying with all their hearts and souls to destroy yiddishkeit. But what they don’t know is what you DO know: The only claim that they have on the Land of Israel is because Hashem, HaKadosh Baruch Hu, gave it to us, and if they don’t recognize HaKadosh Baruch Hu, Hashem yishmor, then they will have no right to be here at all.

If they put buses on Shabbat and fill our Beis Yaakovs with things we are not allowed to teach, but we teach them anyway, because we get fat pay checks from the government. But, we are all going to know very soon that the world is about to collapse, and it doesn’t matter who you are or where you are. It matters what you are.

If you are a believing Jew, and you want to be closer and closer to the truth, i.e. to HaKadosh Baruch Hu, then you’ll be safe if you do teshuva, you’ll be safe. And if you don’t – Hashem yishmor!

It’s time to leave all your silly  toys, your iPhones, your TVs, and whatever gadgets that you have in your house, and to get serious. Start learning. Start davening like you’re supposed to, and please, please help your wives to become more tzniusdik, because the lack of tznius in the whole world is causing the kedusha to fall very low, and without kedusha, we haven’t got a chance in the world to continue.

You know, if Eliyahu HaNavi would come and stand before you today and start giving you mussar, about what you’re not doing, you would probably call the police and say that a mad man is coming to the shul and screaming everyone. Take him away!!

But what does Hashem do in this lowly generation?

Instead of sending Eliyahu HaNavi, he sends autistics, nebuchs, meskanim. If you listen to us, good, and if you want to get rid of us, well at least you won’t call the police. At least you won’t put us in jail. You might call the police and take away the computer, but that’s as far as you’ll get, in the meantime. Bezrat Hashem it’s still not against the law.

And I bentch all those who haven’t got the money to come, that you’ll anyway survive. If you are close to Hashem you will survive. But I’m telling you again, you have to come close to Hashem and get rid of your gashmius. If you can’t make it to Israel for some good reason or another good reason, Hashem will save you anyway, if you’re with Him really, if you get rid of all those horrible sheitels, those wigs, that look mamash like real hair because they are real hair, and that are making many men to have big, big tests in their kedusha.

Time is running out fast.

Until now we’ve been writing for about 26 years and people have been saying ‘so when will it be? It should be already! What’s wrong? Is it true?’ It’s true. We can see one country fighting against another country. We can see how they’re testing the worst weapons that in our wildest nightmares we couldn’t even dream of.

We can see the world is one big mess and so many times it doesn’t even make sense, already. Because we see suddenly in towns and cities, sinkholes open and houses fall in and cars fall in. Even here in Israel, in Ramat Gan, a sinkhole opened up, interestingly enough after the mayor wanted to put buses going on Shabbos.

As I told you before, the North Pole is melting. Soon, upstate New York will be by the sea, and have a coastal view. California – I don’t know how many will remain there. Florida – all of it, Miami especially, won’t be. You understand. It’ll happen. It’s going to happen, the earth has changed and we’re going to very soon be in a situation without food and water, only with HaKadosh Baruch Hu.

While I say ‘soon’, it could still take time.

But we’re not prepared. I don’t know how long it will take, but it won’t take all that long. We have to prepare ourselves. How do we prepare ourselves? It’s not going to help to put away five months’ worth of food. It’ll help maybe for five months, but then at some time it will end.

So what’s the secret? Just to trust Hashem, and the same way He gave us Beer Miriam in the desert and food – manna – also in the desert, He will give us everything. And we have nothing to worry about, absolutely nothing, but only if we’re with Hashem. And He’s already sent us His representative, ben Dovid, he’s here in Eretz Yisrael, bezrat Hashem, and he’s suffering for us, and he’s willing to suffer for us.

Remember the seriousness of the situation. We have to come close to Hashem, we have to realize there is only one Creator in existence, and that’s HaKadosh Baruch Hu, and He’s everything, and He created us from His own being. And we have to live up to it, in order to survive.

Eliyahu HaNavi hasn’t appeared yet, but be ready, and when you hear the shofar blown, don’t ignore it, as if it’s a train going by, or another sound that you want to believe that it is, and not the shofar that tells us that Eliyahu HaNavi is here. But it’s going to be soon, so get ready, because if you’re not ready, then you’ll miss the boat.

Now is the time to be thinking about it, to start getting ready, and to move.

Already, times are getting harder financially, and it’s going to get worse, because your so-called leaders have stolen all the money, and they’re just leaving you with the small change. And you’re going to be very, very scared soon.

But if you believe, and you know that the time has come, then be strong and be happy, because this is what we’ve been waiting for, for thousands of years. And when it comes, only the believers will survive. According to the Chessed L’Avraham, he said only 7,000 Jews will greet the Moshiach.

I don’t know about you, but I want to be one of them.

We are receiving these message from the autistics and their families and their facilitators, who have been putting out messages for 27 years. They had no prior connection with Rabbi Eliezer Berland, or with Breslov, until very recently when the autistics began speaking about the Rav.
Shuvu Banim does not necessarily stand behind all the words of the autistics, though we did verify its authenticity before publishing this.
We continue to believe and pray that the Geula will come with complete compassion – and ask you to partner with Rabbi Berland, shlita, to put a prayer in every home.
====
https://ravberland.com/qa-from-binyamin-golden-anyone-with-a-jewish-neshama-should-cling-to-the-rav/
ASK ADVICE - RECEIVE A BLESSING