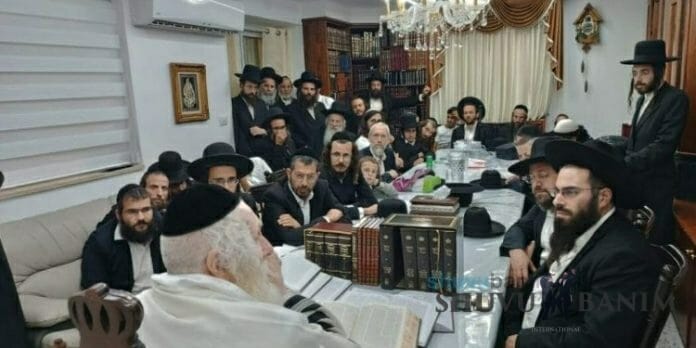 Residents of Tel Tzion from the “Mizmor L’Todah” Breslov Synagogue merited to come to Rav Berland’s home for a special shiur.

The “Mizmor L’Todah” Breslov Synagogue merits that through it many bnei Torah in Tel Tzion draw close to the light of Rebbe Nachman.  Every Tuesday, the Rosh Yeshiva of “Chut Shel Chesed” Rav Shalom Arush, among the long-standing students of Rav Berland shlit”a, comes to strengthen the vatikin (sunrise) minyan at the synagogue and to deliver a shiur over breakfast.

At the beginning of the shiur, Rav Berland shlit”a spoke with great fervor about the importance of domestic tranquility and of speaking words of encouragement to one’s wife, who toils in building a house of Torah.  Below is an excerpt from the shiur:

“This time it is bone of my bones and flesh of my flesh.”  Each person needs to tell his wife that she is the only woman in the world!  There is no one like you in the world.  You make the best tasting food…you clean the house.  To always find something that you can say a nice word about.  It’s forbidden to say, “My mother is better, my sister is better.”  It’s forbidden to say, “While you clean a whole apartment, my mother is cleaning a hundred rooms.”

Afterwards, the Rav shlit”a told a story about the child Yosele in a small town who used to misbehave until he heard one of the fathers say to his son, “You won’t be like Yosele,” and in his heart he decided to go learn Torah.  He went to the yeshiva of Rav Chaim of Volozhin and began to learn Torah.  Despite them sending him letters from home that his father was sick and he should come back, he didn’t pay attention to these hindrances to distract him from learning Torah, until he merited to be great in Torah.

Afterwards, the Rav shlit”a encouraged persistence in Torah.  Then the Rav spoke about Likutey Moharan 8 — “I see and behold – there is a menorah of gold with its bowl on its top.”  After this, the Rav spoke about the weekly parashah “Shelach Lecha,” and the humility of Yehoshua, who despite knowing that there were those who wanted to kill him, because of the prophecy of Eldad and Medad that “Moshe is dead and Yehoshua brings in [the people to the Holy Land]” – he didn’t fear and went on the mission that Moshe sent him on.  After this, the Rav shlit”a said that in this month Esther pleaded to King Achashverosh, “Esther yet again spoke to the king, fell before his feet, wept, and pleaded to him.”  Afterward, the Rav shlit”a concluded with awesome insights from the weekly Torah portion, while seasoning his words with secrets from the entire holy Torah.

At the end of the shiur, the participants went out to pray Ma’ariv with the Rav in the courtyard of the Prayer Hall.