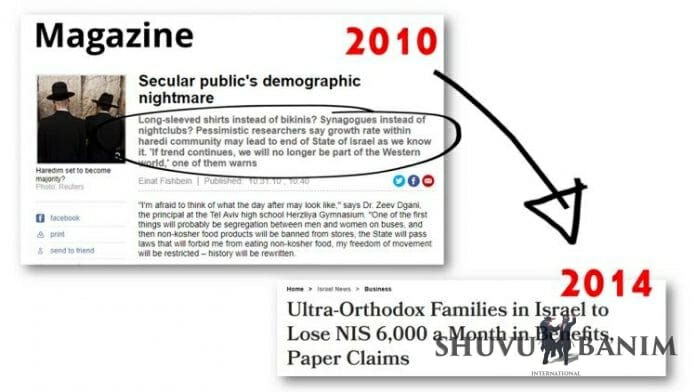 Is it just me, or do you also have the feeling that we are standing on the cusp of some enormous, ground-shaking change?

Everywhere you turn at the moment, there seems to be chaos and turmoil peeking out. I hate politics and usually try to ignore it, as much as possible, but it’s hard to ignore the unprecedented events playing out in parliaments across the world at the moment.

The UK is being battered by the fallout from Brexit, France has got enormous social unrest problems with its ‘Yellow Jackets’, and America is still in the middle of its Trump-induced almost-civil-war.

Here in Israel, we could have another round of elections on September 17, 2019, as the divisions between the different parties prove themselves to be unbridgeable. This ‘clash’ this ‘break’ this ‘showdown’  – however you want to call it – has been in the making for decades.

The State of Israel finds itself at a crossroads.

Today, there are large numbers of people who want the country to totally break free from even a semblance of Judaism, Torah law and God, and then there are large numbers that are pulling – hard – in the opposite direction. And each time there is an election, the rhetoric, the malice and the hatred against the orthodox community goes through the roof again, as immoral politicians try to get votes by promoting their own particular brand of sinat chinam.

The Rav warned us shortly before the last elections in April 2019 that Gantz and Lapid were poised to launch a decree of ‘shmad’, or destruction of orthodox Jewish life, if they got into power. That seems to have been at least part of the reason why the Rav called for the prayer gathering in Hevron on the eve of the elections, to forestall that from happening.

Many thousands of us showed up for it and also joined in online, but it wasn’t the 50,000 people that the Rav asked for. So the elections were won by the lesser of the two evils, and we all breathed a sigh of relief that the danger had been staved off again, for another couple of years.

But maybe, that was premature.

Because something has clearly changed in the political dynamic in Israel, and for the first time ever, it seems that something more than just getting into power at all costs is starting to loom into the picture. And that’s throwing the whole system into total chaos – and also underlining what really should have been obvious for a while now, namely:

It’s becoming harder and harder to pull the political parties together into consensus about the right way forward, because they are facing in opposite directions.

And that’s not going to change anytime soon, it’s only going to exacerbate. So, when the Rav said back in December 2018 that:

“We are now, mamash, at the final moments that we can stay in Eretz Yisrael, in the State of Israel”

– it looks like he was right for a lot of reasons.

Since then, we had the ‘mini-war’ two weeks ago that vindicated the Rav’s assessment that the Iron Dome can’t help us, and there are more and more stories showing up in the press now, most notably THIS ONE, expressing the sentiment that the Iron Dome is showing itself to be more of an ‘Iron Sieve’, and that Israel is facing an enormous problem on its borders that can’t be solved by military means.)

But if we go to elections again in September, then that points to a far more surprising ‘proof’ that the State of Israel is also on its last legs politically, too.

There are portents and signs all over the place at the moment that the chevlai Moshiach are starting to accelerate, and that the Rav’s ongoing battle to prevent a massive war breaking out within Israel is approaching the crunch point.

I know many other people around the world are.

We so need the Rav to recover fully, and to lead us through the stormy, unchartered waters up ahead.

And, we also need more people to understand who the Rav really is, for a few different reasons. Firstly, so that they too can come closer to the spritual light that’s going to illuminate the path through to redemption. And secondly, because the whole saga of the persecution of Rabbi Berland is a roadmap of what’s gone so badly wrong in the secular State of Israel, and why we desperately need things to change.

Once more people understand who the Rav really is, they will come to see just how yucky, spiritually, all those elements who helped to frame him really are, and then they will hopefully want to make some real teshuva. And that’s the biggest boost towards geula coming the sweet way, that there could possibly be.

To that end, we’ve just put together a short video, below, in English which clearly sets out the main facts explaining the true story of who Rabbi Berland actually is, and what was done to him. And, we’ve also created a new website, here: www.oneinageneration.com to go along with the books, that includes an FAQ section and also the back story behind their writing.

Maybe, the world will continue on its merry path for another 200 years exactly how it is, I don’t know.

But maybe, it won’t. Either way, it can only help matters along if more people start to hear the real story of Rabbi Berland, if more people start to follow the Breslov path of sincere prayer and teshuva, and if more of us choose to turn our back on the people and publications who beguile us with their lashon hara and sinat chinam.