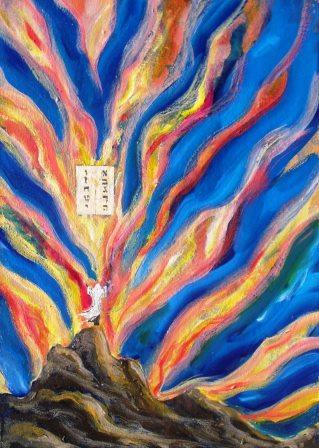 Rebbe Nachman of Breslov writes, “The Niggun of the Tzadik of the Generation is the head of emunah.” Meaning, “Through the Niggun of the great and true Tzadik, the Tzadik is able to bring up all the souls,” since emunah (faith-belief) in Hashem is how the soul rises up. Furthermore, Rebbe Nosson of Breslov teaches, “revealing emunah is through the power of the Niggun,” just like the women of Israel, since “their emunah in Moshe was so strong they took out drums and danced after crossing the Red Sea, and because of this the women did not sin at all. The men only sang after crossing the Red Sea but the women had much more joy and emunah so they went out and danced as it is written, “And all the women went out with drums and dancing.” The Rav explains, “through songs and melodies Moshe brought all the wicked Jewish people out of their heresy and through his Niggun he saved the entire Nation of Israel.” Sing your song and melodies to Hashem, seek out and connect to the Niggun of the Tzadikim of the Generation. Take advantage of the last weeks of the Month of Shevat since the Rav wrote, “The month of Shevat is the month of Niggunim (melodies and song).” Build your emunah in Hashem with dancing and melodies to Hashem, and may we all merit to connect to the Niggun of the Tzadik of the Generation, each Jew in his way, like Rav Succot did in the Rav’s study.

What is the first Jewish Law in this week’s Parsha commanded to the Jewish people at the giving of the Torah on Mount Sinai? The first Mitzvah is “the commandment to have emunah (faith – belief) in the existence of Hashem (G-d).” And this Mitzvah of having emunah in the existence of Hashem is, “the foundation of the Jewish religion, and a Jew that does not have emunah is a complete heritic and does not have any portion with the nation of Israel.” Isn’t having emunah more of an ethical (mussar) concept? No! Having “emunah in the existence of Hashem (G-d)” is a Jewish law. The Sefer HaChinuch explains, “This mitzvah is preformed in every place, and in every time by males and females…since every day of a person’s life he is obligated to live with thoughts of emunah in the existence of Hashem.” And the Chafetz Chayim references this Jewish Law in his practical Jewish Law book, the Mishnah Brurah and writes, “To have emunah that there is one G-d in the World…this is a positive- commandment.”
Is it permissible for men and women to eat together at a Wedding or Sheva Brachos? No, they should not eat in the same room. The Kitzur Shulchan Aruch explains, “It is necessary to be careful for men and women NOT TO EAT in the same room, because if men and women eat in the same room we do not say, “Shehasimcha Bimayono” because there is no happiness in a place where the evil inclination has taken over.” Therefore, when men and women eat in the same room, this room becomes a place ruled by the evil inclination and that is not a happy circumstance.
Dedications for Parshas Yisro: HaRav Eliezer Ben Etyah and the Rabbaneat Shlit”a, Hezkie!, Rav Eliyahu Ben Odel Rut, Yehudah Aryeh Ben Brendel, Ester Rachel Bas Nurit
For Dedications Email: info@tha613.com | For Donations by credit card: www.tha613.com