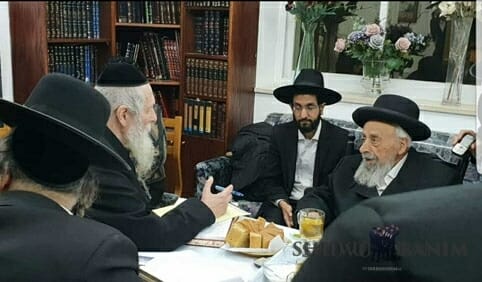 Rabbi Shimon Badani is the Rosh Kollel of the Torah v’Chaim institution in Bnei Brak, and a member of the Moetzet Chachmei HaTorah. He’s renowned as one of the foremost Sephardic poskim in Israel today.

Yesterday, January 30, 2019, Rav Badani, shlita, came to visit Rav Eliezer Berland, shlita, at his home in Jerusalem. Rav Badani came to ask for a blessing for his grandchildren’s shidduchim. During the meeting, these two Torah giants had a very interesting conversation, which included many original Torah thoughts and ideas – and also a question about the redemption.

Below, we’re happy share a translation of some of their words (which you can hear for yourself in the original Hebrew, below):

Rav Berland and Rav Badani started to speak about the Brisker Rav. Then Rav Berland said:

“The main point [to rush the yeshiva boys to get married] begins after the age of 20. Before the age of 20, everyone learns.:

“This is the blessing of Bilaam.

“That way, if there is a kitrug, a special accusation against it, then (the accuser / Bilaam /the satan) will be told ‘you gave them that blessing yourself!! You can’t take it back now!’ The person who said it can’t take it back.”

Rav Badani was wondering about this, so Rav Berland continued to explain:

“Hashem arranged things so that Bilaam would bless us: “How good are your tents, Yaakov, and the dwelling places of Israel” (Bamidbar 24:5). We start the prayers with this.”

“Why did Hashem not reveal to Yitzhak that it was really Yaacov? Because He wanted Yaakov to receive the blessing, ‘as Esav.’ You got the blessing ‘as Esav’, so what do you want? Yitzhak was (apparently) blessing Esav, not Yaacov. The pshut of the pshut (simplest explanation) is that Yitzhak didn’t know that this was Yaacov, who came to take the blessings.

“In the words of the text: “Yaacov drew close to his father Yitzhak, who felt him and said: ‘The voice is the voice of Yaacov, but the hands are the hands of Esav.’ (Bereishit 27:22). In his thoughts, he was blessing Esav. There’s been a machloket (controversy) for 3,000 years, already between the commentators, as to whether Yitzhak really knew that he was blessing Yaacov, or not.”

“It’s written: “The voice is the voice of Yaacov, but the hands are the hands of Esav.” The division between the blessings of Yaacov and Esav, that Esav was blessed [like this]: “Behold, of the fatness of the earth shall be your dwelling and of the dew of the heavens from above.” (Bereishit 27: 39). Dew comes from the fatness of the land, it’s an earthly blessing.

“But by Yaacov, it has a Divine / celestial reality: “And may God give you of the dew of the heavens and of the fatness of the earth, and abundant wine and grain.” (Bereishit 27:28). Even the gashmiut (materialism) is spiritual!

“Because if a person eats a piece of cake in order to continue learning Torah, then this is spiritual.”

“Learning Torah builds the mind, and children come from the mind. Hashem wants us to have a mind full of Torah. Rabbi Meir asked Elisha ben Avuya how it could be that what happened, happened.[1] This was a person who knew the whole pardes of Torah – pshat, remez, drash, and sod – there was nothing he didn’t know. So, how did he become so confused?

“They told him, “if something starts well, it ends well.” (Kohelet 7: 8), which is to say, if the beginning is good, then what comes afterwards will also be good. And when it came to Avuya, the beginning wasn’t good. Avuya was the biggest merchant in Jerusalem, and he wanted his son to be a bank manager.”

Next, Rav Berland was asked why he wears his tallit even at night-time. The Rav explained:

“We also tell over about the exodus from Egypt at night.”

(Rabbi Elazar Ben Azaria said: ‘I was like a 70 year old, and I still hadn’t merited to say about the exodus from Egypt in the night until Ben Zoma gave it over, as it was said: ‘so that you will remember the day of your departure from the land of Egypt all the days of your life.’ (Devarim 16:3). ‘All the days’ = the days. ‘Of your life’ = the nights. (Brachot 12).”

Then, as the questions and answers continued, Rav Badani asked:

“HaRav, when is Moshiach coming?! When?”

“So, we need to be prepared for this. We need to prepare.”

We should also remember what Rav Badani said about Rav Berland two years’ ago:

“Anyone who talks badly about Rav Berland is going to inherit Gehinnom!”

[1] Elisha ben Avuya was a contemporary of Rabbi Akiva, and one of the four leading Torah sages who entered the Pardes, and plumbed the depths of esoteric thought. Yet Elisha ben Avuya eventually became a heretic who denied God. In the Talmud he is often referred to by his nickname Acher¸ ‘The Other’, a reference to how he turned away from Torah observance and true belief. See the Gemara Tractate Kiddushin, 29).