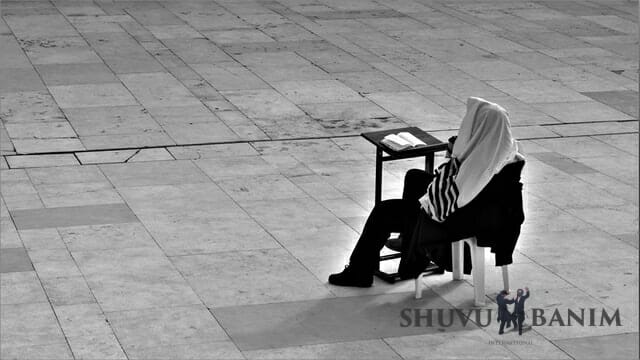 With the help of Hashem, we present to you the first Parsha sheet based on our online weekly classes. This is based on the shiur of Rav Ofer Erez given this week via our online Breslov University.

We hope to upgrade the design of the Parsha sheet in the coming weeks and to add more of the teachings shared throughout the week.

View and download this weeks parsha sheet in pdf below. Be sure to print and distribute wherever Jews are found.

AND ITS POWER TO DRAW DOWN BLESSINGS OF REDEMPTION

Adapted from the weekly class of Rav Ofer Erez Shlit”a

“The voice is the voice of Yaakov and the hands are the hands of Eisav. And he did not recognize him” (Bereishis 27:22)

In this weeks Parsha we read about our holy forefather Yaakov getting dressed up in the clothing of his wicked brother Eisav in order to receive his fathers blessing. When he walked into his father Yitzchaks room, his father felt his clothing and said, “The voice is the voice of Yaakov and the hands are the hands of Eisav.” He then asked, “Are you my son Eisav.” Yaakov Answered “I am.” And with that he received the blessings.

What is going on here?

Yaakov our forefather is the mida/trait of Truth, he represents truth and is the prime example of truth in this world. So how did he lie to his father to trick him into giving him the blessings?

The Holy Arizal teaches that Yaakov wasn’t really telling a lie. When he put on the clothing of the evil Eisav, it wasn’t just material clothing, a costume that he dressed up in. Rather at that moment he actually took on himself the essence and all of the reality of Eisav. He reserved for himself only his own “voice”, the “voice” of Yaakov.

The voice is the inner soul and the clothing are how a person presents himself and acts in this world.

The holy books teach that this reality of the ‘voice of Yaakov and the hands of Eisav’ is the reality that the Jewish People both as a whole and individually will find themselves in before the coming of Moshiach, before receiving the great light of the Geula.

A Jew will be in such a difficult spiritual state that it may be difficult to differentiate between him and Eisav. On the one hand he feels as if he is in a constant drive to be filled with bodily enjoyment and worldly desires. But that is only on the outside. That is only the aspect of “clothing.” On the other hand he is filled with a constant burning desire to come close to Hakadosh Boruch Hu.

This extremely difficult struggle was already ordained before childbirth. When the verse describes the turmoil taking place in Rivka’s womb, “And the children fought within her, she said, ‘If so why is it that I am?’.” Rivka represents the holy Shechina which is Knesset Yisrael, the whole of the Jewish people.

Rashi brings the Midrash that says, that during Rivka’s pregnancy whenever she would pass a place of idolatry Eisav would push to come out, and whenever she passed a place of Torah study Yaakov pushed to come out. This is the struggle that we all struggle with in these difficult times before Moshiach.

A person can wake up early in the morning, daven vasikin and when he’s done at 8am he feels like he’s on the level of Rebbe Shimon Bar Yochai, he’s fixing the world. Then possibly only an hour later at 9am he is overcome will evil thoughts and feelings, he may even fall into bad activities and feel as if he’s the most evil person in the world.

What is going on here? Why does this happen to a person?

So lets go back to the story of the Parsha.

Why did Yaakov need to get dressed up as Eisav? That was the only way to receive the blessings.

Which blessings did he receive? The highest and holiest eternal blessings that will be fulfilled in its completion only during the times of the Geula. So somehow, we see the connection between this inner turmoil and the ability to receive the highest blessings. We need to get dressed up as Eisav in order to receive the blessings. Why must it be this way?

The secret to this lies in the continuation of the verse “And the children fought within her, so she said, ‘If so why is it that I am?’ and she went to seek out Hashem.”

A person needs to remember that even if he feels completely taken over by Eisav from head to toe, that is only on an external level, internally all he ever desires is to seek out Hashem. So when the “voice” of Yaakov, is overcome by the “hands” of Eisav, and the person as a whole is in distress, ‘If so why is it that I am?’, the natural response of a Jew is to seek out Hashem, to cry from the depths of their soul HASHEM SAVE ME!

Only by means of that pure holy cry from the depths of the soul can the highest blessings be brought down.

Chazal teach that Hashem made the forefathers and mothers barren because he desires the prayers of the tzaddikim. One must ask: Do you really think Avraham, Yitzchak and Yaakov, Sara, Rivka, and Leah would just stop davening if they had children at a younger age!? They would certainly be talking to Hashem and praying day and night that the child should be strong and healthy and grow up to follow the ways of Hashem etc. The tzaddikim never stop praying.

So what do Chazal mean when they say that Hashem made them barren because he desires the prayers of Tzaddikim?

So Hashem puts us in a place of distress in order to bring out that desperate cry. Hashem clothes us in the clothing of Eisav only to bring out from within us the voice of Yaakov in its purest form.

Let’s present a clear example how this plays itself out nowadays.

It used to be, that if a person wants to do an immoral act there would be a lot of obstacles in his way. He would be embarrassed to do it where people see him, he would need to travel to a place that no one knows him and then hide his identity. And even there he would need to seek out an opportunity to do the immoral act. Etc.

Nowadays, with the invention of internet, and person can enter the most impure places within a few seconds and there is nothing standing in his way. Even if he is keeping to the rules of the Rabbonim not to have a device with unfiltered internet, nevertheless with a few dollars any kid can purchase a device and connect to the most impure places in the world in a matter of minutes.

Why did Hashem create such a spiritual test through the fast advancement of technology in the past few years?

When our surroundings and external reality act as an obstacle to do bad it may be a very good thing and keep people on the right track. But on the other hand, when we choose to do good, it’s not from the deepest and purest place of wanting to do good, sometimes it’s just more convenient and we can’t bare the embarrassment.

Today, when access to all the impure places are readily available and there is no shame involved, the circumstances and surroundings are no longer preventing a person from doing evil, if in that situation a person nevertheless chooses to do good, that is a revelation of the true desire to do good in its purest form. That revelation could not have been possible in earlier years.

For this reason, it is specifically in a generation like this that we will merit the complete redemption. May it come soon, Amen.

Rav Ofer Erez Shlit”a:  We Must Help the Fight to Prove the Truth about Rav Berland Shlit”a

In the Shadow of Terror — R’ Berland Prays for Am Yisrael at the...

David Simcha - May 16, 2022 0
Following the recent series of terrorist attacks, our Rebbe Rav Eliezer Berland shlit"a went out to the the ruins of the Holy Temple --the Kotel (Western Wall) -- at midnight last Thursday night, 13...
Read more

David Simcha - May 15, 2022 1
Pained by the fire which severely damaged the grave of Binyamin HaTzaddik near Kfar Saba, Rav Eliezer Berland shlit”a wrote a prayer to say at his holy tomb: Prayer for Binyamin HaTzaddik (Bava Batra 11a) Ribono Shel...
Read more

David Simcha - May 13, 2022 0
The important Kollel students of “Nachaley Netzach” -- under the direction of R’ Shmuel Stern shlit”a, one of the great students of Rav Berland -- merited to enter the inner sanctum on Wednesday evening...
Read more