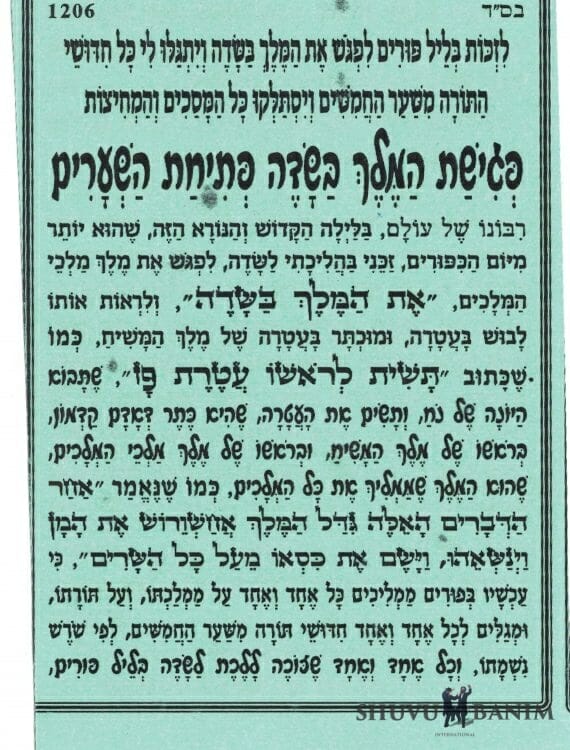 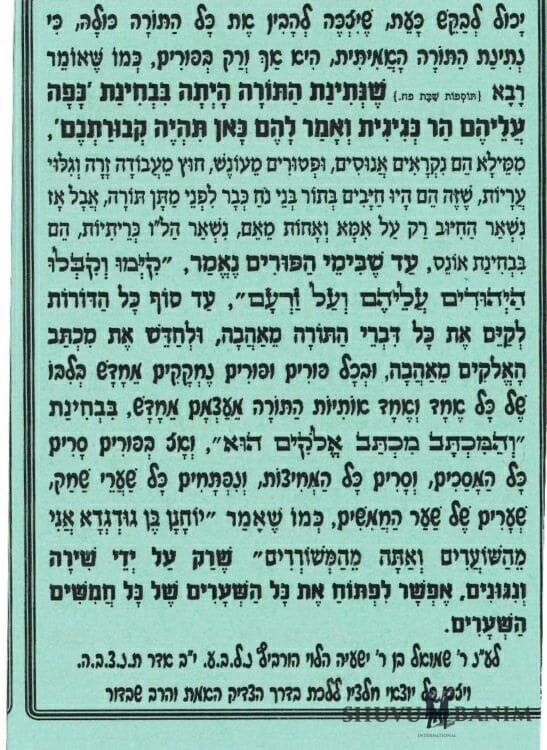 Master of the world, on this holy and awesome night, which is more than Yom Kippur, grant me to go out to the field, to meet the King, the King of Kings, “the King is in the field”.

To see Him dressed in His crown and crowned with the crown of the king Moshiach, like it’s written, “place on his head a crown of gold”.

And each and every one that merits to go out to the field on the night of Purim can request at that time that he merits to understand the entire Torah, because the true giving of the Torah is only on Purim.

Like Rava said (Tosfot, Shabbat 88a), “that the giving of the Torah was an aspect of ‘holding a mountain over their heads like a barrel and He said to them here will be your grave’”.

In that case, it would then be called ‘forced’ and they would be free of punishment [for transgressing the commandments], except for idol worship and forbidden relationships, which they were liable for anyway as Noahides already before the giving of the Torah.

Although, then there remained only an obligation on [being together with] a mother and a sister from the same mother, and there remained 36 things for which one receives excision, which are an aspect of ‘being forced’, until the days of Purim about which it is said, “the Jews fulfilled and accepted upon themselves and on their descendants”, until the end of all the generations, to fulfil all the words of the Torah with love, and to renew the letter from G-d with love.

Like it was said by, “Yochanan ben Gudgada, I am from the gatekeepers and you are from the singers”, meaning that only through singing and melodies is it possible to open all the gates of all the fifty gates.

You can buy that book HERE.

All the beginnings start from Purim

Master of the world who can do anything, and from whom nothing is withheld, grant me to feel that all the beginnings start from Purim.

Please, “G-d, the Great, the Mighty and the Awesome, G-d above, the G-d of Avraham, the G-d of Yitzchak and the G-d of Yaakov”, “and I drew Sisera and the Head of the Army, Yavin, to you, to the Kishon Stream, and his chariots and his multitude”.

“[A]nd say to him, did not Hashem, the G-d of Israel, command you to go and be drawn to Mount Tavor, and you took with you tens of thousands of men from the sons of Naftali and the sons of Zevulun”.

Because Zevulun went to war without a heart, they didn’t need either their head or their heart, like they would call Yehoshua Bin Nun ‘the separated head’ – that he had no head, because when you go with the Tzadik, you don’t need a head or a heart, only to make complete teshuva.

And then “and he called his name Hashem is my banner, and he said because the hand of Hashem is on the throne of G-d, a war for Hashem with Amalek from generation to generation”.

Because the war with Amalek continues day and night, hour to hour, second to second, without pause or rest day or night, when awake, asleep, dreaming.

To be saved from the Spiritual Husk of Haman/Amalek

Master of the world who can do anything, “rescue my soul from the sword, my essence from the hand of the dog”.

And only he is able to fight against the spiritual husk of Ahashverosh and Haman, who wanted to wipe out Israel, and to uproot every memory of holiness, and to rule with evil and impurity over the world.

And to uproot the nation of Israel from the world as they are the symbol of straightness and holiness.

Who in every generation try to subvert the holiness, and the straightness and the justice and the morals, and try to force the whole world to become violent men, so that only the wickedness and cruelty and heartless will rule in the world.

And, on this, Esther and Mordechai fought with all their souls and all their might until the last drop of blood, with all of their nefesh, ruach, neshamah and yechidah [levels of soul].

Because the spiritual husk of the dog rules over the yechidah, and the sword rules over the nefesh, and therefore they needed to call Ahashverosh a dog, in order to uproot him from the world so that he would not have any control over the souls of Israel, and afterwards say, “rescue me from the mouth of the lion, and answer me from the horns of the Re’mim”.

Which are mentioned in the Torah section dealing with Rivka, who Esther merited to be encompassed in and to save the seed of Rivka.

Because Esther and her seven handmaids and Chatach are nine, against the nine times jug is mentioned by Rivka.

And they all fasted for three days and three nights, without food or drink or a drop of water.

“Answer me from the horns of the Re’mim” –

Esther prayed against all the arrogant ones that tried to fight against the nation of Israel, and to uproot the name of Israel from the world.

Like it says “they will not remember the name of Israel any more”, and so when Esther took herself and Mordechai out of the spiritual husk of the dog and the sword, and from the jaw of the lion and the horns of the Re’mim, she promised and said,

So too, we are obligated to see the miracles which Hashem does every moment and second for each and every one of us, in general and individually.

And therefore “the queen shuddered” (hitchalchal) which refers to the fact that she merited to enter the Chalal HaPinui (the vacated space).

And to make all the worlds shudder, in all [the spiritual worlds] of Atzilut, Briyah, Yetzirah and Assiyah with the light of Emunah which was drawn down from the ‘sanctuary of the sapphire bricks’.

And therefore a Hebrew slave-girl is freed upon attaining signs of puberty, because from the moment that she can bring boys and girls into the world, immediately it is obligated to free her and to marry her to her master or to the son of her master.

The enormous light of Purim