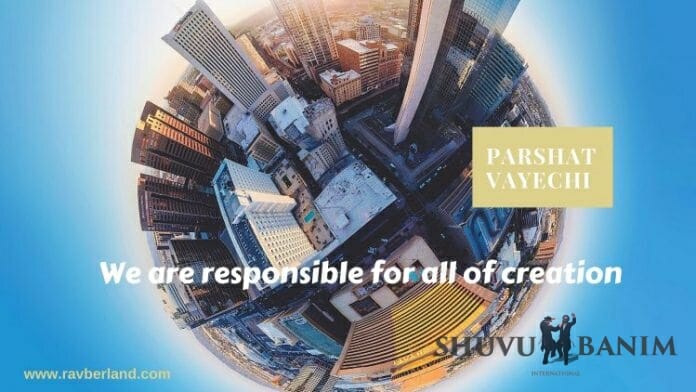 Parshat Vayechi: We are responsible for all of creation

By learning Torah, you can affect every cell that was damaged or weakened, and already starting to decay. Torah learning renews them, and affects them, and gives them brains. The Torah rebuilds you and recreates you anew.

Zevulun engaged in business dealings – “Happy is Zevulun when you go out” – Yehuda went to war, Levi served in the Beit HaMikdash (temple), but Yissachar’s soul had absolutely nothing to do with this world….other than to learn Torah! Yissachar was only Torah, for Torah learning is greater than serving in the Beit HaMikdash, as it’s written, ‘More precious than pearls’ (Mishley 3:15), greater than the Kohen HaGadol who used to enter the Holy of Holies.

A talmid Chacham (person learned in Torah) who is a mamzer (born as a result of a union forbidden by the Torah) is greater than a Kohen Gadol who’s an am ha’aretz (unlearned man). If he’s learning Torah day and night, then he’s bigger than the Kohen Gadol, because it’s impossible to escape from the yetzer hara (evil inclination) except by in-depth Torah learning. And this dafka only occurs when a person toils [in his Torah] until the point of death, to the point where he wants to die.

We have to toil in Torah, and to kill ourselves on its behalf, and to not learn Torah in a lax fashion, or in a relaxed fashion. The shleimut (completeness) of learning Torah doesn’t happen when we’re relaxed! A person has all kinds of lusts, and he also has a lust for ‘relaxation’. All of our lusts and desires hint to the alufim (generals, leaders) of Eisav, and one of these was the ‘General of Relaxation’.

True repose only comes from the Torah

A person likes to go along in a relaxed way, to feel relaxed, to learn in a relaxed way, and honestly, the true ‘relaxation’, the true repose only comes from the Torah – “And he saw the rest, that it was good…” (Rashi). True repose is the repose of the Nefesh (soul). Learning Torah polishes the Nefesh and cleans it, and scrubs off all the dirt. It sends all the spiritual grime outside, and then we merit to have a peaceful soul.

A person needs to know that he’s responsible for all of creation. Every day, we need to create the world anew. The world is managed by those who learn Torah. By way of the Torah learning, the world is created. “For all the innovations of creation, that Hashem Yitbarach always does on each day, so on this day there will be rain, and on that day it will be dry, and so that one time it will be cold and moist, etc, and similarly for all the other changes – everything is by way of the Torah.” (Likutey Halachot, Yibum 3).

If you neglect your Torah, a disaster will happen

Rav Natan is explaining that you are creating the world. If you start to neglect your learning and spend your time sleeping, a disaster will happen. If you’re day-dreaming or talking to someone during the time you’re meant to be learning, a disaster will happen. A person needs to know that he doesn’t need to read any newspapers, and he doesn’t need to know what’s happening in the world. If you take an interest in the world for even a split-second, there will be a disaster.

A person needs to believe that the moment he neglects the Torah, a disaster will happen! You need to know that all the changes in the world, they are occurring because of your Torah learning. When a Jew learns [Torah], then the whole world starts to love us. By all the nations, one time they love us and one time they hate us. If you study history you see that one year they love us and one year they hate us and want to destroy all the Jews, because everything depends on our Torah learning – and not on politics, and not on any other thing.

When a person learns Torah in-depth, and he really puts his brains into learning Torah, he’s creating new worlds! He’s creating a new reality! Suddenly, they create new laws [of nature] for him! Now he has the money to travel to Uman! And suddenly, he enjoys spiritual and material abundance.

Our sins are engraved on our bones

The Rebbe brings down in Lesson 101 that “When a person does an aveira (sin) chas v’shalom, then the aveira and the transgression is engraved on his bones, as it’s written: “And your sins will be on your bones.” (Ezekiel 32). The Rebbe says, you want to atone for your sins? You want to erase your sins? It’s really hard to do this! Your sins are engraved on your bones, the sins fracture your bones – all the bones of a person are broken. It hurts him here, it hurts him there, all of this is sins, each and every sin is engraved on a bone. “And your sins will be on your bones.”

The bones are hollow; they’ve already been engraved on, they are broken from all the engraving. If a person wants to recompose his bones from scratch, and rebuild them anew, and to escape from the ‘sins on his bones’ this can only be done by learning [Torah] in-depth, and reviewing the material, and being tested on it – to learn Torah in-depth!

When someone is already blemished or damaged, teshuva alone doesn’t really help him, because his bones are already fractured and engraved upon, so how is teshuva going to help? Now, we need to inject some new ‘brains’ into the bone, and to renew the bone, and this occurs by way of learning Torah in-depth.

By learning Torah, you can affect every cell that was damaged or weakened, and already starting to decay. Torah learning renews them, and affects them, and gives them brains. The Torah rebuilds you and recreates you anew.

Learning Torah is the crucial ingredient

A person searches for all sorts of advice about how he can escape from his bad middot (character traits). So, he has hitbodedut (personal prayer) and Chatzot (getting up to recite the midnight lamentation), and all this is wonderful and fine, but if he doesn’t also have in-depth Torah learning, nothing else is going to help him. If a person isn’t also learning Torah in-depth, then he’s missing the crucial ingredient.

If that’s the case, then he has no moach (brain, intellect), because we only get our intellect from learning Torah in-depth. If a person does hitbodedut, but he simply has no brains, so then Hashem wants to give him things, but He doesn’t have anywhere to put the shefa (bounty)! A person prays with kavana (intention), but then after prayers he runs off to eat, he runs off to speak with his friend. While we’re still saying ‘Alenu’ he’s already taking off his tefillin, he’s already talking to his friend, so then Hashem says to him: I want to give you things, after the prayers, so just say a verse [of Torah], just say 2-3 halachot, learn a few lines from the Gemara, and then you’ll have a wondrous intellect and you’ll understand everything.

Where did you run off to?

After prayers, a person requests [from Hashem] to: “Give us binah (understanding) in our hearts, to understand and to become wise, and to listen, to learn, to teach, to guard [your mitzvot] and to do them.” And Hashem wants to give him – now! – all the brains, but he immediately starts talking with his friend, and sometimes he runs away before ‘Alenu’, and he’s already taken his tefillin off, and he’s already outside, and he’s arguing with someone, or already eating.

And then Hashem says, “I wanted to give you some amazing brains, where did you run off to?”

So, the Rebbe says that without in-depth Torah, there is no brain / intellect, and that the crucial ingredient will be missing from everything that person is trying to do. The Rebbe says that in-depth Torah learning is the ikker (essential point), and so the Rebbe brings down in Sefer HaMiddot (the book of traits) (the section on Learning, point 33): ‘The person who is habituated to learning will perform all the mitzvot’.

‘Habituate us to your Torah!’

The whole world will make teshuva simply from seeing his face

…the whole world will make teshuva simply from seeing his face. A person’s wisdom lights up his face, ‘and then they remove the yoke of government from him, and also the yoke of derech Eretz.’

Translated from the Tzama Nafshi newsletter.

Questions about the Tzaddik

Einstein wanted to be religious

You should be written in the book of the True Tzaddikim

E=mc2 and the nations of the world