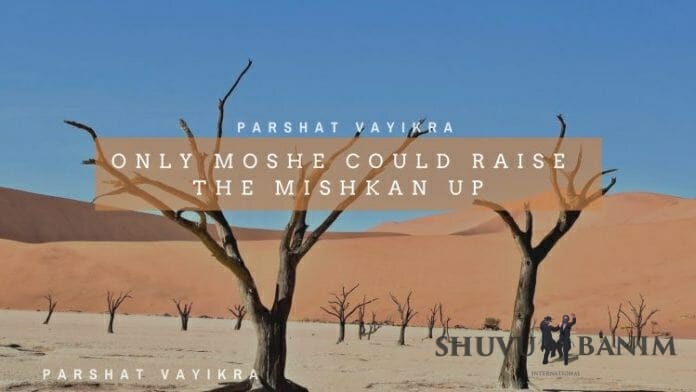 Parshat Vayikra: Moshe Rabbenu was the only one who could assemble the Mishkan

Who am I, that God should speak to me?

Moshe replied: “I can’t write the alef of vayikra. Vayikra means that You called me. What, am I really worthy of You speaking to me?! Who am I, that You should speak to me. I am nothing, the nothing of nothings. I’m the worst of the lot. I can’t write vayikra. Let it stay vayiker (And it happened) – without the alef.

“Like what was written about Bilaam, “And Hashem happened upon Bilaam”. Talk to me the same way that you talk to Bilaam. Maybe, I’m also similar to Bilaam.”

The Baal HaTurim says that Moshe only wanted to write vayiker. Hashem said to Moshe:

“Stop arguing, and write the alef!”

The real level of Moshe Rabbenu

Moshe went to Korach and begged his forgiveness: “I’m sorry, maybe I did something to hurt you?” He went to Datan and Aviram and said: “Maybe I didn’t act nicely towards you? I came to ask your forgiveness.” They said to him, “Only now, you’re coming? The whole congregation is with us now.” Moshe didn’t even have a minyan of Jews left.

And really, Moshe was permitted to believe that he was [like] Bilaam, because this was his level! But those who thought that Moshe was Bilaam, that he was just some big sorcerer, Hashem should have mercy? Every one of them died in the desert.

The Midrash Rabba (Vayikra 15) says about “And He called to Moshe” that from here you can learn that every Talmid Chacham (learned Jew) who doesn’t have daat (intrinsic spiritual knowledge) – a dead carcass is better than him. What is daat? Daat is when you have humility and lowliness.

Daat is when you say: “I am not worthy of anything.” If a person thinks that he’s better than someone else, he has some fleeting thought that he’s better than someone else, then a dead carcass is better than him. Even Moshe Rabbenu, the head of all the prophets, who took Israel out of Egypt, and who did the 10 plagues, and countless other miracles, like splitting the sea and bringing the Torah down from Heaven. He was in Heaven without any bread or drink for 120 days – and he said: “What have I done? Who am I, anyway? What, I did something? Hashem did everything! I didn’t do anything!”

Everything is a present from Heaven

This was Moshe. This was the daat of Moshe. When Moshe learned Torah, he knew it was a present from shemayim (the Heavens). He went up to Heaven and brought down the Torah, and he knew that this was a present from Hashem. If a person doesn’t have this daat, then the Midrash Rabbah says: a dead carcass is better than him.

But when it came to joining together all the pieces of the Mishkan, not one single piece ‘fit’ with another piece. They said: “Moshe, what’s going on here?” Moshe said to them, “There is no other choice. Even if you try to raise up the Mishkan for the next million years, you won’t manage to join even one single piece of it to another.”

Only Moshe could put up the Mishkan

And this is why it’s written that Moshe raised up the Mishkan. Only Moshe could put the Mishkan up! No-one else, except for him, could do it! All he did was grasp hold of the parts, and they all connected themselves together. The moment that it was brought under the grasp of Moshe’s hand, each section inserted itself [in the right place].

The Metok M’Dvash says that the Tzaddik is beyond any comprehension. This isn’t just someone who prays a lot, or who prays particularly well, and who learns well, or goes up mountains and cries out to Hashem. Of course, when a person does these things, he will become a Tzaddik.

Who can grasp the True Tzaddik?

But the matter of the [true] Tzaddik, who comes from the aspect of Moshe, this is something else entirely, that it’s impossible to grasp. This doesn’t depend upon prayers, or Torah learning, this is something that cannot be comprehended at all. Of course, this is achieved by way of Torah and prayer.

First a person needs to know all of the Torah, and to recite all of the prayers until his very last drop of strength. You need to faint over every word. And after that, a new spring [of wisdom] will be opened for you. A new level, a new sefira[2] that no other human being in the whole world can comprehend.

And the Tzaddik who is the aspect of Moshe merits to achieve this only by way of his humility and his lowliness. Only by way of being truly ’nothing’.

[2] A Sefira is the term given to a kabbalistic ‘world’.

Daily Chizzuk: Believe the Tzaddik, that you will succeed

Questions about the Tzaddik