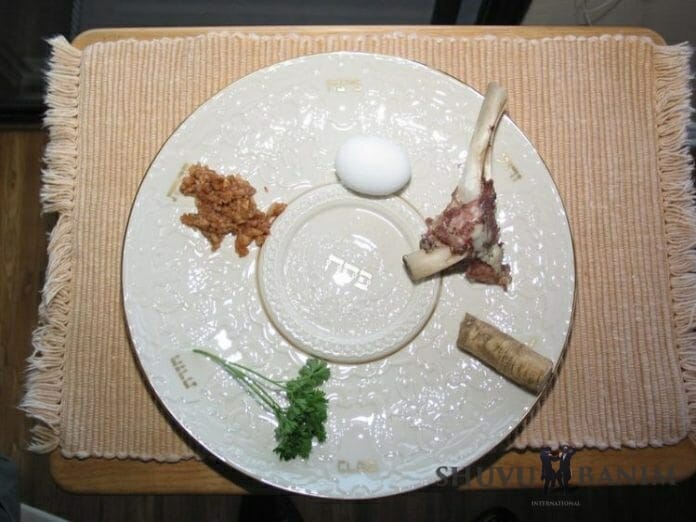 Translated and adapted from the Hitchadshut Newsletter, #116

In the old days, the students of the Tannaim would hide themselves away in cupboards and under beds to get a better understanding of how a Tzaddik comports themselves at home. Today, we have an easier way of grasping some of the avodat Hashem of our Tzaddikim and holy leaders.

We’d like to share with you some of the customs and practices of Rav Eliezer Berland, shlita, as gathered from eye-witnesses at his Seder table, including many grandchildren and other family members. We hope you’ll be inspired to conduct your own Leil Seder with a little more holiness and happiness, and that we should all be blessed with at least the taste of redemption this Pesach.

Rav Berland follows the minhag (custom) of the Arizal. Every head of a household has his own seder plate placed next to him at the table.

The Rav himself makes kiddush for everyone. Many years ago in the past, the Rav used to drink wine on Seder night. Now, the Rav only drinks grape juice, and over the last few years he’s been makpid (careful) to drink Carmel Mizrachi grape juice.

The Rav drinks the majority of a revi’it of a cup simply reclining.

The Rav follows the Lithuanian (Litvak) custom for karpas, and eats some potato. The Rav doesn’t announce to others that they should eat less than a kazayit (an olive-sized amount).

Rav Berland hides the afikomen in a different place each year after the children have left the room. One time on top of a cupboard, or under the tablecloth – and then the children come back and search for it. Whoever finds it stays next to the Rav until it’s time to eat the afikomen.

One year, one of the grandsons asked for a flight to Uman as his afikomen present. The Rav said to him that he could have it on condition that he’d finish six order of the Mishnah by Rosh Hashana. The Rav told him: “And if you only finish half, then you’ll only get a ticket to get there.”

The Rav reads the haggada along with everyone else, very simply, stopping in between sections to give over some commentaries or stories, including sometimes stories of some of the miracles that happened during the holocaust, or stories of Tzaddikim.

There are some chiddushim (Torah insights) that the Rav gives over many times, like the question of why they came to Bnei Brak, to Rabbi Akiva, who was only a student at that time? There are two explanations given:

And of course, the Rav always emphasizes the subject of the four sons, which are the four foundations, and says that the Tzaddik is the tam, the simple one.

Reading the haggada itself can take between two and four hours, with the Rav reading it with great enthusiasm and joy, especially for the children present. The ‘ma nishtana’ is sung by the children according to whatever they learnt in their kindergarten or Talmud Torah, either in Hebrew or in Yiddish.

The Rav is careful to listen to each of their chiddushim, and to be very impressed by whatever he’s told.

Revealing and covering the matza

The Rav’s custom is to uncover the matzas beforehand.

The Rav uses chicken and not meat for the Zroah, and has the custom to raise it up.

The amount of matzah to eat

Is measured according to what can fit in the closed fist of an adult.

Making the blessing on the matzah – maror

The Rav makes the ‘chamotzi’ and ‘achilat matza’ for everyone. The blessing on the maror is recited by each person individually.

The Rav doesn’t tell people not to speak while eating the Korach sandwich, but the Rav himself doesn’t speak until the end of Korach. If someone asks him a question at this time, the Rav will gently shake his head, and sometimes he’ll learn from a small gemara until everyone has finished.

The Rav only eats matza at the seder table, and nothing else.

The Rav is not makpid about Chatzot, only that the first kazayit should be eaten by then. Sometimes, the time for Chatzot of the Rav is that of the Breslov tradition (6 hours after nightfall), and sometimes it’s (6 hrs after nightfall of) Rabbeinu Tam.

All of the songs are sung sitting down, and then afterwards the Song of Songs is recited. Afterwards, the Rav goes to pray with his yeshiva students. Seder night usually ends around 4am.

Shuvu Banim wishes all our readers a happy and kosher Pesach, 5779!