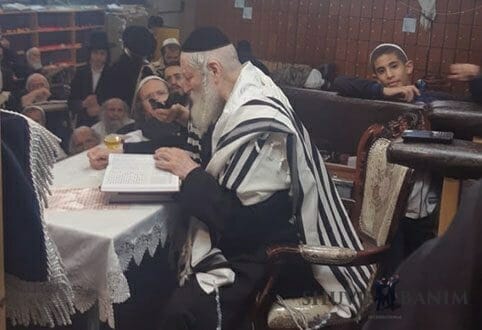 Rabbi Berland tells us: “Persevere until the end!”

This past Shabbat, Shabbat Parshat Re’eh, 5779, (August 31, 2019), Rabbi Eliezer Berland, shlita, spent many long hours in prayer, together with his community. In fact, from the beginning of Kabbalat Shabbat until the end of Melaveh Malka, Rabbi Berland and the holy Shuvu Banim kehillah spent no less than 14 hours praying together.

During the Melaveh Malka meal, Rabbi Berland, shlita, gave over many words of chizzuk, on the subject of not quitting part way, and continuing to persevere until the very end.

Rabbi Berland mentioned this particularly in connection to staying close to the Tzaddik, saying that whoever sticks by the Tzaddik until the end, will merit to be brought to his complete tikkun (spiritual rectification).

We’re pleased to share a translated excerpt of some of his comments, below:

“The Rebbe (Rebbe Nachman of Breslov) said, “I have succeeded in fulfilling everything that I promised.” Everything that the Rebbe promised, he did. Everyone who continues to persevere, and who won’t fall away in the middle of the process, the Rebbe will bring him to his complete tikkun – every single person!

“So, we need to keep going until the end. Don’t fall away in the middle of the journey! Don’t cut your payot (side curls) off, don’t just walk around in a sweatshirt, or a vest. Suddenly, a person decides to take off his suit, a group of them already decided to take off their jackets, and to remove their payot. I’m also going to take mine off [referring to his jacket], what’s going to happen? (The Rav laughs).

“But, anyone who continues on until the end, the Rebbe will make him into a real tzaddik.

“He got confused, he falls, he fails, he removed his payot in a previous life, and now he’s getting all these thoughts in this incarnation. Everyone needs to persevere, and to not fall away in the middle of the process. The Rebbe said all this, when he was travelling to Uman.

“A person needs to know that he was created to be a big, real, tzaddik, even if he’s acting in the opposite way.

“The Rebbe said that it doesn’t matter! The only thing is that he shouldn’t give up in the middle, and let go of me. Then, he’ll be a huge tzaddik, the likes of which hasn’t been seen throughout all the generations. No other tzaddik will be able to reach his level.”

You can watch Rabbi Berland giving over this shiur in Hebrew, below:

These are the holy words of Rabbi Eliezer Berland, shlita. May we all be blessed with the ability to take them to heart.

A vision and a message

Rav Berland has asked for us to recite the following Zohar

Kalman Wiseman - March 22, 2020 2
Let's get our prayers to ascend As the world continues to descend into chaos, Rabbi Eliezer Berland, shlita, is continuing to suffer terrible torments in prison, on behalf of each and every one of us. Rabbi...
Read more

Kalman Wiseman - March 21, 2020 0
Sparks of Light for Parshat Ki Tisa 5780 In this week's edition of Sparks of light, the unedited translation of some of Rabbi Eliezer Berland's recent Torah lessons, we'll cover: How did the Shunamis know...
Read more

Kalman Wiseman - March 18, 2020 3
Amazon Bans Rabbi Berland's Book of Prayers #2 Many readers wanted to know why we didn't update THIS POST with the link for where to buy Rabbi Eliezer Berland's new Prayers for Health book, which...
Read more

Kalman Wiseman - March 14, 2020 0
Message from the Tzaddik, Rabbi Eliezer Berland, shlita, that was given over on Erev Shabbat, Parshat Ki Tisa, 5780. As Israel starts to implement a raft of draconian measures to try to contain the Coronavirus,...
Read more

Rivka Levy - March 12, 2020 1
For the last few years, there’s been a familiar pattern occurring for regular geula watchers. On the one side, we see some tremendously holy people, tzaddikim, kabbalists, telling us that very soon, the whole world...
Read more

Kalman Wiseman - March 11, 2020 0
Rav Pinto: Coronavirus and all the disasters are happening because the geula is close – and how it’s connected to Rav Berland The famous kabbalist Rabbi Yoshiyahu Yosef Pinto, shlita, is the head of the...
Read more

Let’s stop Coronavirus in its tracks – Prayers #2 out tomorrow!

Kalman Wiseman - March 9, 2020 0
Rabbi Berland's Prayers #2 is out tomorrow! Many months ago, back in November 2019, Rabbi Eliezer Berland, shlita, told the Shuvu Banim staff to make a big effort to print and translate as many of...
Read more

WEBINAR RECORDING PART 2: The Global Pidyon – What Really Caused The Coronavirus And...

YD Bergman - March 9, 2020 0
WATCH THE RECORDING OF THE LIVE WEBINAR ALL ABOUT RABBI BERLAND FROM A TORAH PERSPECTIVE (PART 2) The password for the recording will be given to anyone who is registered for the webinar. Even if...
Read more