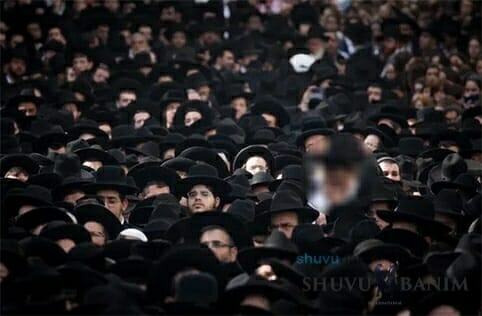 After the Fundraising Campaign for Pidyon Shvuyim (redeeming of captives) of our Rebbe Rabbi Eliezer Berland shlit”a went public, a Litvish Kollel student from England told of the personal miracle that occurred to him after he decided to donate.

This Litvak Kollel student says that he saw our Rebbe Rabbi Berland shlit”a only once in his life, and, even so, he relates that he decided to donate 500 NIS for Pidyon Shvuyim (as the Rabbanim requested).  The matter involved self-sacrifice for him; however, the donation didn’t delay returning to him — these are his words:

Listen to the recording in Hebrew here

“I fear talking to such a holy community (the holy Breslov community ‘Shuvu Banim’), ‘Shuvu Banim’, ‘Knishta Chada,’ the only community in the world which is bringing close the Redemption mamash.  I am a Litvak Kollel student who lives in Gateshead, England (a city in which dwells a community of Chareidi Jews numbering around 500 families who, among other things, maintain Yeshivas Gateshead).  And even though I’m Litvak, I feel the love that each Jew has for Rav Berland — Rav Berland knows what he accepts upon himself for the entire Jewish People.

“I try to say each day the Tikkun Clalli seven times (like the Rav requested for his success), and I see in this much Siata D’Shmaya (Divine Providence) in all my matters.

“Despite that I’m a Kollel student (and the financial situation of Kollel students is known), when I heard that they’re organizing a fundraising campaign for Rav Berland, I didn’t think twice, and donated 500 NIS.”

“Mamash, with the donation, I received a message from the bank that I exceeded my credit limit; I didn’t know how to tell my wife.  I prayed and said to Hashem, ‘I didn’t do this for myself, but for the Tzaddik, and even if I lose from this, I have absolutely no regret.’

“Listen to this Divine providence — that day I learned in Kollel with regular gishmak (enthusiasm) and with the thought that I did the right thing.  At the end of my learning seder (period), the administrator of the Kollel came over to speak to me, and told me that they were reviewing the accounts and they noticed that on the account of over a year ago, they owe me more than 500 NIS.  On the following day, [which was] yesterday, the money was already deposited in our account.  I didn’t lose; I only received more.

“Let’s learn from this ‘Kal Va’Chomer’ [‘if such and such…then all the more so…’].  I’m a Litvak who resides under the klipah [the evil husk] of chutz la’aretz [according to his own words],  what do I understand of our Rebbe Rav Berland shlit”a?  Baruch Hashem, I prayed to not be influenced by all the lies that are being heard in the world.  I requested of Hashem, ‘Ribono shel Olam, guide me on the true path to see who is the true Tzaddik.’ I donated and saw miracles. Kal Va’Chomer, you who are very close to Rav Berland and pray with him every day, the Rav mamash returned many of you to do teshuva, certainly you will receive in return much more than 500 shekels.

“You know up close the greatness of the self-sacrifice of Rav Berland.  I [know] only from a distance.  Only once did I meet the Rav; I didn’t know at all then who he is.  Certainly, you won’t lose.  I am mamash envious of you that you are close to Rav Berland.  If the public could pray for me, Yisrael Meir ben Chava, that I should be closer to Rav Berland, I will have a lot gratitude for this.  That I should also merit to be in Jerusalem and to see the release of the Rav, along with the entire process of Redemption in Jerusalem, the holy city.

To listen to the words of the Rabbanim of the community dial *9148, extension 10.

This Will Save Your Life – GUARANTEED!