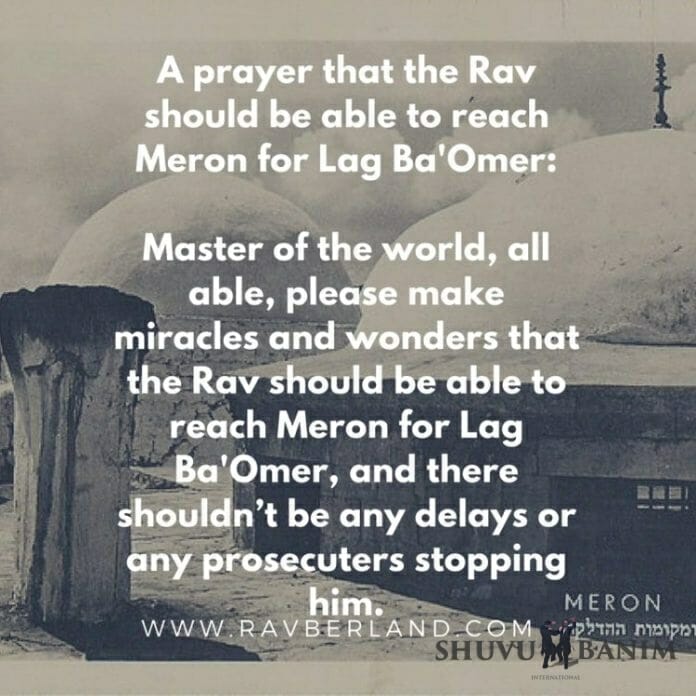 In a recent class that he gave over in Ashdod, Rav Eliezer Berland, shlita, had the following to say about the forthcoming gathering in Meron, where traditionally more than 500,000 Jews of all backgrounds gather, to celebrate the hiloula of Rabbi Shimon Bar Yochai:

“Next week, on Wednesday [night], everyone is obligated to travel up to Rabbi Elazar, the son of Rebbe Shimon Bar Yochai,[1] without any exceptions.

“No one should be missing! On the fourth week and fifth day of the Omer, everyone is obligated to travel up, in their throngs and with their small children. “In our youth and in our old age we will go, with our sons and with our daughters, because it is for us a festival unto Hashem” (Shmot).

“Bring your children, your boys and girls, and give your daughters [nice] dresses. You are not travelling up stam (for nothing). Come wearing your most beautiful dresses. When a person leaves Mitzrayim (Egypt), they need to leave with great festivity, and wearing yom tov clothing…

Sadly, the Rav’s persecutors are continuing to dog him at every turn. This time, they are trying to urge the Israeli authorities to ban Rav Berland from coming to Meron on L’ag B’Omer, and to prevent him from lighting the bonfire in the Shuvu Banim enclosure.

With so much in the world hanging by a thread at the moment, including a possible open confrontation between Israel and Iran, the Jewish people urgently need the Tzaddik HaDor, Rav Berland to be able to get up to Meron this L’ag B’Omer 5778, and to pray on behalf of the nation.

May it be Hashem’s will.

[1] Rabbi Shimon Bar Yochai and his son, Rabbi Elazar, are buried very close to each other in Meron.

[2] This year for the first time ever, helicopter trips up to Meron are being offered from across Israel.

These are the sufferings of Moshiach – Rav Badani