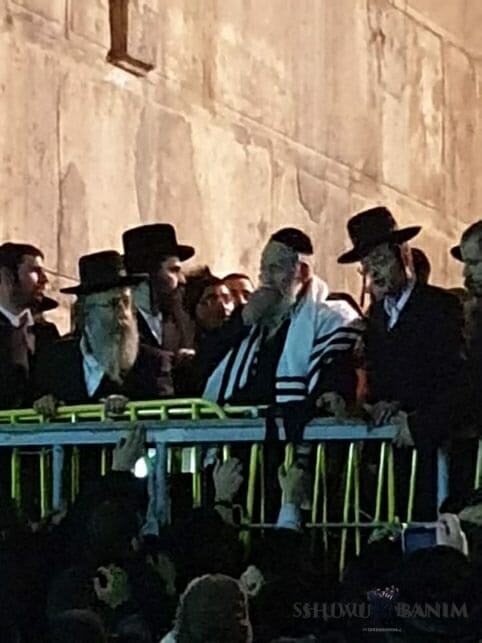 After repeated attempts by the Israeli court system to put off the hearing of our Rebbe, Rabbi Eliezer Berland shlit”a, the critical hearing has been set for this Tuesday (Dec 1, 2020) at the Supreme Court.  To that end, prayer gatherings have been scheduled around Israel for his immediate release and speedy recovery.

The unprecedented persecution of Rav Berland, who at 84 is the oldest prisoner in the Israeli prison system, and who suffers no less than 26 different illnesses, has reached a point of a matter of life and death.  As had been reported over the last several weeks, the Rav suffers from, among other illnesses, heart problems (he has a pacemaker), has only one kidney, and has gangrene in his leg.  After undergoing two difficult surgeries, he was immediately returned to prison without a chance to recover in the hospital.  Moreover, the Israeli authorities have attempted repeatedly to prevent the Rav from receiving the proper medical care, requiring a court petition for something as minor as having his hand checked after suffering severe pain (it was discovered afterward that he had a broken hand).  The Rav’s attorneys have stated that this kind of treatment is without precedent and unexplainable.  It was reported in the name of autistic Binyamin Golden, that this was part of a deliberate attempt to assassinate the Rav while in prison custody.

While the Rav has been sitting for 10 months in prison without charge, and without any evidence brought against him, the court system has repeatedly attempted to delay his hearing.  This Tuesday, December 1, the crucial hearing will finally take place to decide if the Rav will be released.

Last week a prayer gathering was scheduled to be held at the Cave of the Patriarchs in Hebron, but in a shocking move, the police closed down the entire city of Hebron to prevent it.  Therefore, prayer gatherings have been scheduled at holy sites all over Israel for the Rav’s speedy release and recovery, Bezrat Hashem.  For those dwelling in Chutz L’Aretz, please join in from wherever you are at 8pm Israel time.

The prayer gathering will take place tomorrow evening, Monday, November 30, at 8 pm, at the following locations:

Buses will be available from cities all over Israel.  For those living in the Jerusalem area, buses will leave at 6:15 from Beit Knesset Sadigura at Rechov Shmuel HaNavi 79, and at Rehov Shivtei Yisrael 48, Jerusalem to Me’arat HaMechpeleh (Ride is 10 NIS roundtrip, please register beforehand at the number below)

Additional details are available by calling the Breslov line, on *9148.

To register for buses, press extention 40#

Watch the video “They are trying to kill him.”

R’ Aharon Shwartz: Corona 3-Times as High Amongst Chareidim – The Price of Silence About R’ Berland