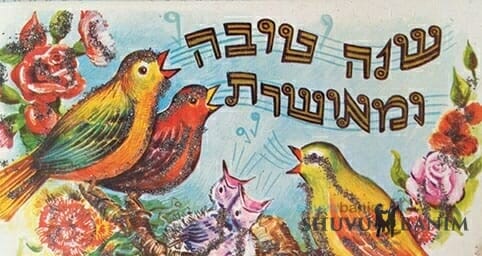 To merit through the saying of selichos during the days of creation to draw supernal mercy and influx to the new year and to all generations, and forgiveness of sins, including the sin of the calf.

To say before selichos:

Ribono shel Olam — Master of the World, All-Powerful, let me merit through saying selichos with a broken heart, and abundant tears, to draw the influx to the new year, from the beard of Atika Kadisha — the Ancient Holy One, “Because the world is built on kindness.”

And through the saying of selichos, give me the merit to do abundant kindness, because on Kaf-Heh Elul the world was created, and on the second day, Hashem said, “Let there be a firmament between the waters and it will separate between water and water.”

Because through the saying of selichos during the first six days of the creation of the world, we merit to the partition within Adam Kadmon, which separates between the name MaH and the name BeN.

Because through the saying of selichos, we merit to draw from the supernal kindness of Atik — the Ancient One — concealed within the body of Adam Kadmon, to within the body of Atika, which is the hidden light of the seven days, which are concealed within the seven dimensions of Atika Kadisha, which is the mystery of “On this day all the fountains of the great deep burst open” as it says in the holy Zohar in Parashas “Noach”: ‘Then the gates of wisdom will open,’ and there is the secret of the upper waters within Atika Kadisha, which are drawn from the hidden mind of Atika Kadisha.

Because through the saying of selichos, we merit to the mystery of “You made everything through wisdom,” and “Where can wisdom be found,” which is the mystery of “Abundant kindness” — numerical value “Mordechai,”

Because through the saying of selichos, the mystery of the goblet of Yosef is revealed — numerical value of Mordechai and Esther, Matityahu and his sons.

Because through the saying of selichos with abundant tears, and a broken heart, the influx is drawn from the head of Adam Kadmon, by way of the Primordial Sea, and the Last Sea, where all the influx for all generations until the revival of dead is.

Because through the saying of selichos it is possible to heal all the sick and to revive all the dead,

that through kissing the calf, they caused their lips to swell, until they died through suffocation, and through hunger, all those who kissed the calf, and only through the saying of the selichos of the days of the creation of the world, and Erev Rosh Hashana, is it possible to sweeten all the judgments from the beginning of time, including the sin of the calf.

All the Secrets of Rosh Hashanah – Rabbi Eliezer Berland shlit”a