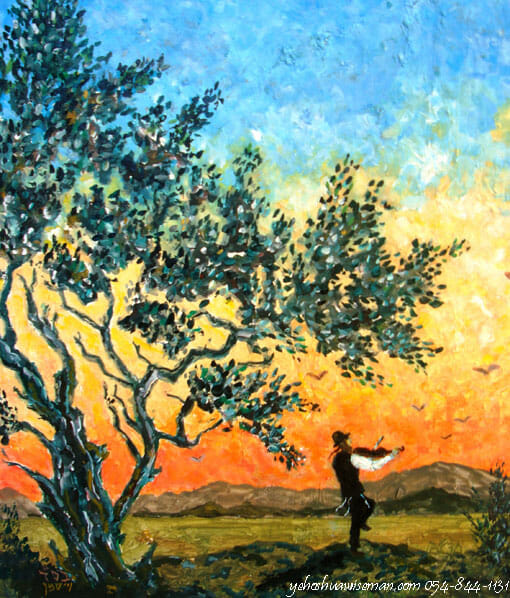 Rectifying through Joy and Dance

”And you shall rejoice in your festivals” (devarim 16:14)

Even though during all of the Jewish Holidays there is a mitzvah to rejoice, on the Holiday of Sukkot it is a mitzvah of it’s own! The verse “And you shall rejoice in your festivals” is said about Sukkot. On Sukkot in the Bet Hamikdash there was unusual Joy. The Sages established extra Joy for the Holiday of Sukkot, multiplied Joy! The entire Holiday was set aside for non-stop dancing and rejoicing!

Certainly one must study Torah as well, for if a person doesn’t have Torah he lacks the ability to dance [from holiness and purity], as Rebbe Nachman explains (LM2 31): “Through melody it can be recognized on a person if they accepted upon themselves the yolk of Torah, and the sign is “On their shoulders they will yisa’u (lift it)” (Bamidmar 4) as our Sages expound (arachin 11) “There is no mention of the word yisa’u in the Torah without reference to song as it says ‘sa’u zimra – raise up song’”, and this verse was said in regards to the sons of Kehat whose jobs were to lift up the Holy Ark on their shoulders which refers to one accepting upon themselves the yolk of Torah.”

One who accepts upon himself the Yolk of Torah can sing, dance and make music.

In the Bet Hamikdash there was extraordinary joy as the Torah itself says “And you shall rejoice before Hashem your G-d seven days”, it’s a mitzvah d’oraita, a Biblical Commandment! This commandment is not said by Pesach, not by Shavuot, it is said only by Sukkot. It is a biblical commandment to rejoice constantly for seven days! The Torah commanded us to rejoice and dance non-stop, day and night, for 7 days!

How would they do this?

They would bring every musical instrument, they would play with violin, harps, and cymbals etc. Each and every person would play with the instrument he’s familiar with. But the dancing? The strongest, stormiest dancing? The dancing while juggling? This only the greatest Tzadikim would do! The moment the dancing began only the greatest loftiest holiest Tzadikim would dance; they would do flips, cartwheels, somersaults etc., like it says about King David. Only esteemed men who toiled all day in Torah and Mitzvos and faithfully taking care of the needs of the community, who didn’t sleep all night and day, who sacrificed their entire beings for G-d and His People – only they were the ones who would be dancing, flipping and spinning in the Holy Temple.

Nowadays, it is incumbent on every Jew to dance and rejoice during these holy days, and to know that this happiness and dancing is a great and awesome rectification for the soul. A person does not know which kind of harsh spiritual judgements are waiting for him in the coming year. The Rebbe says (LM 206), A person sins and harms his soul, at first things continue to go well for him, Hashem then begins to send him slight hints, if he still doesn’t get it Hashem calls to him louder, until the person starts getting kicked and pounded with suffering.

You sinned? Do teshuva! The same Torah that told you it’s a sin tells you about teshuva! But if you don’t do teshuva then maybe after some suffering something will start to sink in, you will begin to do teshuva, begin to sob over your spiritual blemishes, get shaken up a drop! If not, then G-d forbid, a spouse will get sick, if not a spouse then the children G-d forbid!

The Rebbe promised that he will fix everything, but the question is how will he fix? Which suffering much a person prevail in order to receive his fixing. Sometimes it hurts to go to a doctor, and if someone is really sick the surgery can be painful. We are Jews! Nothing is rectified for free! By the Christians nothing is needed to be done, just go to the Priest and confess to him once a year and he says ‘forgiven forgiven’ afterwards everyone continues as before. By Jews there is no such thing! For sins a person must pay! On every transgression he must pay! If a person doesn’t do teshuva, and doesn’t wake up then he starts getting hit with suffering as it says “There is no suffering without sin”.

There are 22 days from Rosh Hashana until Simchat Torah to fix everything. Kabalistically, from Rosh Hashana until Yom Kippur the Judgements are sweetened, we sweetened our yetzer harah that it shouldn’t control us. Now from Yom Kippur until Simchat Torah there are 12 days for forgiveness of sins, we are now building the New Year. Until now we got the Ktiva and Chatima writing and sealing of the decree. Rosh Hashana is the sealing for the complete Tzadikim, Yom Kippur for the beinonim regular people. Now is the time to build! The building is on Sukkot! With joy! Dance! Song! Fervorous prayer! And according to how much a person sings and dances during these days that is how he builds the coming year.

Through dancing and singing all of a person sins are forgiven. What is the Hebrew word for dance? Machol. Machol means to be forgiven! All of a person’s sins are forgiven! Through the Mecholot dancing not one sin remains! No sins! No Judgements! The Arizal says that in addition to the joy which we are commanded on Simchat Torah, whoever rejoices and dances on the night after Simchat Torah, dances until dawn, he merits that all his sins will be completely nullified!

With the help of Hashem we will merit this year, through the joy, the singing and dancing – forgiveness of sins and sweetening of judgements, and the complete redemption speedily in our days, Amen!

Donate through PayPal and help us build the English Website