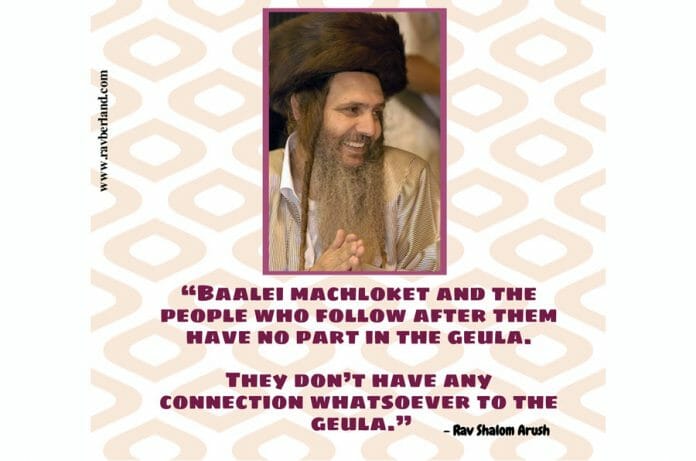 Rav Shalom Arush’s recent speech about gossipers and the Redemption:

Over the last few weeks and months, many of the Gedolei HaDor have been giving out the same message about baalei machloket, those unfortunate individuals who invest so much time and effort in speaking badly about their fellow Jews, and who sow division, strife and hatred between people wherever they go.

“Yaacov said that the geula [of Am Yisrael] depended on achdut (unity) and peace. And he warned the Children of Israel about this, saying: ‘Gather together! Assemble yourselves!’ [i.e. come together in unity.]

“Truly, anyone who’s involved in any machloket, he’s already dead, because the letters of machloket ,מחלקת spell out: חלק מת – or ‘a portion of death’. They’re already dead! And it doesn’t really matter that HaKadosh Baruch Hu killed them in the plague of darkness, as it was from the aspect of ‘the destroyed house was destroyed’.”

“We are mamash in the time of the plague of darkness, which was the final plague before the Egyptian redemption (geula). In our generation, there is not a single house which doesn’t have its ‘dead people’, both in the spiritual and the material realms.”

Rav Arush continued that all of us can feel this darkness in our lives at the moment, and that the redemption of Am Yisrael is imminent. He went on to explain who is going to make it through to geula, and who isn’t:

“Baalei machloket (i.e. people who cause trouble and strife and speak badly of others) and the people who follow after them have no part in the geula. They don’t have any connection whatsoever to the geula.”

He continues: “A Jew could see miracles and wonders, and see the open revelation of the Divine Presence and God’s holiness, and he could go to Torah classes and understand deep things, and he could study [Torah] in depth, and be a ‘lamdan’ (person who’s very knowledgeable in Torah) – but if he’s not working on himself, and not working on his middot, and on his lusts, and especially the ‘lust’ of participating in machloket – he’s going to die, and he won’t have a share in the geula, God should have mercy!”

Who are the 4/5 that don’t merit the redemption?

Rav Arush made it clear that the worst machloket of all is to be engaged in slandering and turning people against the Tzaddikim of the generation. He described how the 4/5 of Am Yisrael who died in the plague of darkness – all the people who were baalei machloket, and all the people who were listening to the baalei machloket and believing their slanders and lies about the Tzaddikim included:

“‘Learned people’ and people of ‘understanding and ideas’, who came against Moshe Rabbenu with all sorts of conjectures and rationalisations…. and they wrote entire books containing them, and newsletters, and discourses….And what was the end of all of these ‘truth seekers’ who were causing controversy against the Tzaddikim? They all died in the plague of darkness.”

Writing about the contents of Megillat Setorim, or Hidden Scroll, Rav Natan of Breslov warned us that:

“The wars of Gog and Magog, will include all the machloket (disagreements) and the accusations that will be made against the true Tzaddikim, those who uncover the true will of Hashem Yitborach…

“Woe to the souls of these people, who have a share in the machloket and disagreements involving the true Tzaddikim, and who reveal Hashem’s true will in the world…

“It’s written in the Midrash (BeMidbar Rabba, יח:י): ‘He who is brazen-faced, and who is not ashamed in front of those who are bigger than him, and he who is a baal machloket (troublemaker), you’ll see that he is the wickedest of the wicked.”

Rav Natan also sternly warned us: “You must flee from all machloket and from all disagreements, and not get drawn into fights and arguments. And in particular, be very careful that you should have no part whatsoever in any mockery, disagreements or criticism of the true Tzaddikim, because you don’t know what the next day will bring. And you don’t know against who and against what you may be opposing or mocking.”

The Gemara in Rosh Hashana 17a explains that while even the worst sinners of Am Yisrael only go to Gehinnom for 12 months, those who disgrace Talmidei Chachamim spend generation after generation in Gehinnom.  Elsewhere, the Gemara defines an ‘apikorus’ – a heretic – as someone who disgraces a Torah scholar.

The words of our Sages are timeless – but the trick is in applying their words to the events that are unfolding before our own eyes.

“The final test before Moshiach comes is Rav Berland. Anyone who talks against him, or who believes the rumors being circulated about him, won’t merit to witness the imminent redemption of our people.”

The Tzaddik and student of the Rav, Rav Shalom Arush, shlita, is telling us clearly: we are now in the time of the plague of darkness, and anyone who participates in machloket, or who speaks against the true Tzaddikim will die, and won’t be redeemed.

The Tzaddik and mekubal from Tiveria, Rav Dov Kook, shlita, told us clearly:

“All the slanderers and people who are speaking libels and falsehoods about this awesome, holy Tzaddik should be aware that soon, judgment will occur, and that there is a Judge mamash, who will reveal his [Rav Berland’s] honor and innocence to every eye.”

Rav Berland’s persecutors have been working tirelessly for years to spread lies, scandal and machloket about the Rav and his community. Their libels and slurs led to the Rav, shlita, being chased around the world for three years by the Israeli government, before being unjustly incarcerated for crimes he didn’t commit.

And they’re still going! These baalei machloket are working around the clock to manufacture more false stories and more slanders, and have even set up their own ‘hotline’ and newsletter, filled with outrageous lies and lashon hara.

And now, they are moving their efforts into the English-speaking world. In November 2016, two of these baalei machloket made a trip to America, where they met with many well-known rabbis and started peddling their slanders and lies wholesale on the other side of the Atlantic.

In the Hidden Scroll, Rebbe Nachman explains that: “At first, there will be a huge machloket surrounding Moshiach, and people will say: “That’s Moshiach?!” On one level, everything that’s occurring is part of the process of redemption.

But don’t get sucked into the machloket! Don’t follow after these baalei machloket, or believe their lies and slanders! Redemption is right around the corner! But anyone who’s engaged in slander, evil speech, stirring trouble or provoking strife against their fellow Jew – and especially the Tzaddkim of the generation – simply won’t live to see it.

Rav Shalom Arush a man of love and compassion to all human beings who is the master of judging people favorably came out strong this week against the gossipers saying they will not merit the redemption. This doesn’t come as much a surprise as Rebbe Nachman himself who coined the idea that everyone must look only at the good points of others and judge favorably said “I can judge anyone in the world favorably besides for a baal machloket”.