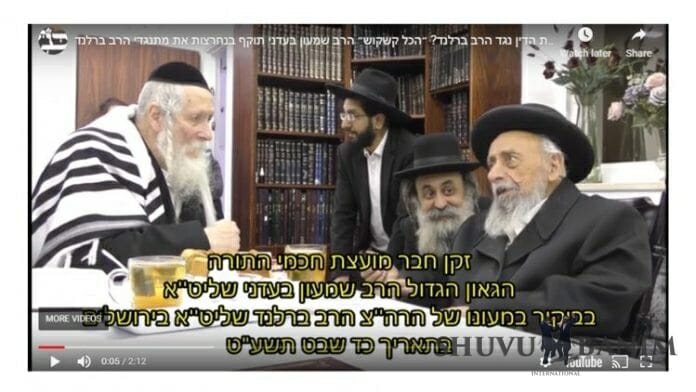 Rav Shimon Badani is a leading Sfardi posek in Israel, appointed by Rav Ovadia Yosef, a leader of the “Gedolei Mo’etzet Hatorah”, Rav Ovadia’s Council of Rabbis and Torah Scholars of Shas.

Following on from Rav Shimon Badani’s recent visit to Rav Eliezer Berland, Rav Badani, shlita, said a few words afterwords about the people persecuting the Rav, and the tactics they used to try to build a ‘case’ out of thin air.

(You can see Rav Badani speaking in the original Hebrew, by clicking below:)

“I had 3-4 Breslovers by me, who had beards even longer than yours. [I said to them]” ‘What are you saying? We need to hold a Beit Din!’ [They told me]: ‘We made ourselves a Beit Din, already.’ [I replied]: ‘Ah, you’ve held a Beit Din already? Wonderful. What did you decide?’

“[They told me]: ‘The girls [who were meant to have made the complaints] were brought to these people [i.e. the persecutors’ own Beit Din].’ [I responded]: ‘Ah, did you also bring [Rav Berland] there too?’ [They replied]: ‘No!’”

“How can this be?! How can you judge someone when he’s not even there [to defend himself]?! This is a sin.[They told me]  He is gavra alma– ‘a dangerous person’[1]. What sort of ‘dangerous person’ is this?! He’s a physically unwell man aged 80 years old. And this is a gavra alma?!

“What you’re telling me is nonsense. There’s no such thing as this.

“Afterwards I said them you, you see, now he’s come out [of prison]. Go to the Beit Din of the Eida Chareidit, and let them judge the case.  They didn’t go. They left. Everything is nonsense!

“I heard from a clerk what happened, they asked me about everything. I adjudged everything. Whatever they [i.e. the Rav’s persecutors] are going to try to do to me, they aren’t going to be able to do it. I already told them my opinion, that they should go to a Beit Din, so they shouldn’t get their brains all confused. [I said] Why are you coming to me?!

“Who are you?! You are the judges and also the deciders? You are saying he is gavra alma. All of this is [coming from] you! Who gave you the right to do this? Gavra alma, gavra alma. What are you talking about, gavra alma?!

“Even though the Gemara states that: “if there is a voice against him he’s suspected”[2], this only applies in a case where there are no enemies. So what do you want? All of you hate him (i.e. Rav Berland)! Hashem will help us.”

All paths lead back to the same people

Rav Shimon Badani’s words make clear that the Rav’s persecutors created the ‘smoke’ to blacken his name; then they created a false ‘Beis Din’ to judge him; then they claimed that because there is ‘smoke’ there must be fire, and handed down a false psak against him without even inviting Rav Berland to the Beit Din to defend himself. And then, they took this false ‘judgment’ to other poskim and rabbis, to try to get them to rubber-stamp the decision of the false Beit Din.

And in the meantime, it’s the same people behind it all!

As Rav Badani concluded, Hashem y’azor – God will help us, and the truth will finally come out.

[1]  Gavra Alma is a halachic term that applies in rare cases when someone is a known murderer. Then, a  Beit Din will be afraid to bring him to court as he might take people’s lives if he’s apprehended. So in those cases, they are allowed to judge and hold the court case without the defendant being there.