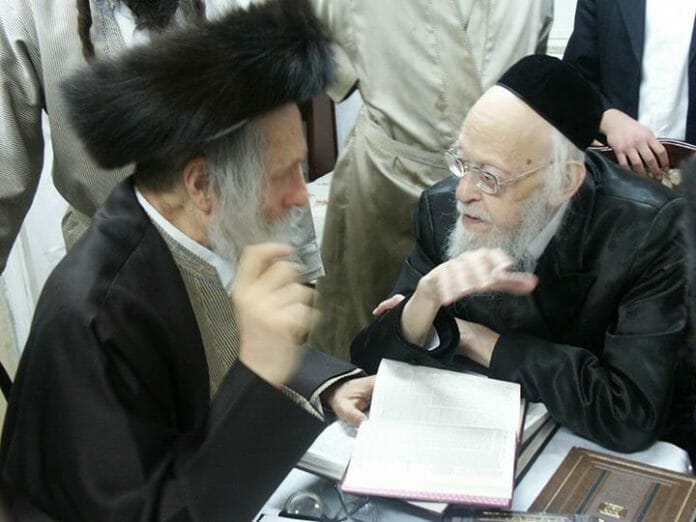 “Thirty years’ ago, Rav Chaim Pardes was the Chief Rabbi of Tel Aviv. He was imprisoned for crimes that he didn’t do and that never even occurred, and it looked as though he’d have to stay in prison awaiting his trial for a very long time to come. It was a situation very similar to that of Rav Berlands, same kind of baseless accusations, same kind of treatment by the court keeping him in jail until the end of the long trial.

One of the people who was very upset at the situation that the Chief Rabbi of Tel Aviv found himself in suggested that Rav Pardes should try to bring matters to a head by entering a plea bargain, so that he could get out of prison after six months, instead of having to sit in prison for another three years. Rav Pardess contacted the late Rav Elyashiv, ztl, and cried to him: “I’m completely innocent! All the accusations against me are lies and slanders. I didn’t do anything!” Rav Pardess then asked Rav Elyashiv his halachic opinion about the matter: “Should I confess to something I didn’t do, so that I can get out of prison sooner, or should I fight to the end in order to prove my innocence?” Rav Elyashiv told him: “Confess to whatever they want. By me, you remain completely innocent, I know that you didn’t do anything. Chazal teach: “A person can not make himself into a *rasha*.” A person can confess to whatever he wants, and still remain innocent. The halacha which sates that an admission to crime is like a hundred witnesses only applies to monetary crimes, nothing else.” After this conversation, Rav Pardess went back to the police and confessed to whatever they asked him to, in order to arrange a plea bargain and to be set free. According to the late Rav Elyashiv, ztl, the halacha in these cases is that a person should do everything in their power in order to minimize the time they spend in prison, even if that means confessing to things they didn’t do.

Everyone knows that all the accusations again our teacher, Rav Eliezer Berland, are all based on lies and slanders. But the halacha in these matters is clear, and we have to abide by it. We’re not afraid of being disgraced. It’s told that they asked Donald Trump about the billions of dollars of debt that he had, and he replied that he was happy that he had them, because he’d only managed to build up his business empire by taking loans and accruing debts. Dear friends, how did we come to lose our sanity like this? We are Breslev chassidim, we are Rabbenu’s chassidim, we’re the Rav’s chassidim! And we’re scared of being humiliated and shamed?! Each humiliation for us is like a diamond! Just as Trump loves his debts, we love our humiliations. The Rav didn’t confess because he is guilty of anything, he confessed because he is following *daat torah*, and also following the wishes of all the Gedolei HaDor who asked him to arrange a plea bargain. Humiliation? Dance if they humiliate you, sing if they humiliate you, because it’s a gift. We know where we were until we got to the Rav, shlita, and where the Rav took us to after we found him. We know what terrible suffering the Rav, shlita, has been going through in these dark days. So now, the Rav is throwing us a few diamonds, so that we’ll also share in some of the merit. The first thing that the Rav, shlita, is going to do once he’s freed is to give his persecutors a million dollars. After all, they helped him to scale such immense spiritual heights. The Rav told his daughter who came to visit him in prison that he has no idea what it means to hate a fellow Jew. The people who are humiliating us, they’re just purifying us.