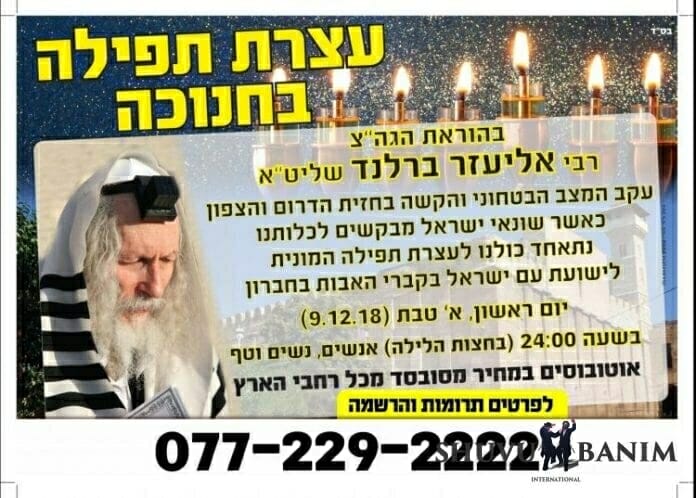 UPDATE: After some confusion on the date, we have now clarified that the date of the prayer gathering will be Monday night, April 8th, 2019. Thanks to the readers who pointed that out.

On March 12th, 2019, Rav Eliezer Berland, shlita, again returned to the theme of the huge prayer gathering being called on Nissan 4th, 5779 (Monday night, April 8th, 2019) in Hevron. In a brief recorded message, the Rav said:

“All of us are obliged to come to the giant prayer gathering in the honor of Pesach, that will be held in Hevron, at the graves of the Patriarchs in the Mearat HaMachpela.

“On Monday night, going into the 4th Nissan, 5779 (Monday night, April 8th, 2019), each person is obliged to come to the prayer gathering, and to donate the hezit hashekel[1]. People need to give at least 100 shekels.

“Each and every person should take care of their trumah (contribution). Hashem is with you, give with an ayin yafa (good eye), and there will be salvations within Am Yisrael.

Three days later, on March 15th, terrorists in Gaza fired 2 Fajr rockets at Tel Aviv, which failed to be intercepted by the Iron Dome.

Baruch Hashem, both rockets fell in empty spaces in Gush Dan, including in Holon. The salvations are already beginning, as per Rav Berland’s words. Gush Dan and the suburbs of Tel Aviv is the most densely-populated area in Israel, and there is very little ‘empty space’.

May we all have the merit of heeding the words of the Tzaddik, who warned on December 6, 2018, before Chanuka, that the whole of Israel was under imminent threat of rocket attacks from both the North and the South.

At that time, the Rav said:

“They are readying thousands upon thousands of rockets, which will reach to Tel Aviv and Jerusalem”

Rav Berland has called for 50,000 people to attend the prayer gathering in Hevron before Pesach, to sweeten the gathering judgments.

Bezrat Hashem, we will heed his voice.

[1] The Half Shekel was originally mentioned in Parshat Ki Tisa. It was traditionally paid before Pesach for the upkeep of the Temple. There are varying traditions about the Half Shekel in our times, with some commentators saying it should be paid by every man, woman and child before Purim, in remembrance of all the Jews who were saved from Haman and the enemies of Israel. The Kaf Ha-Chayim wrote that the purpose of the donation is to attain atonement, which is why every person should be included.

The Rambam wrote more about the halachot of the Half Shekel in Laws of Shekalim 1:5.