A man tells three Rabbis his amazing personal account of his friend being saved from the death penalty in Thailand, one of the most brutal counties in the world, after giving a Pidyon to Rabbi Eliezer Berland shlit”a.

Rav Binyamin Dafan relates the following story which he heard along with two other important Averchim, Rav Aharon Berkowitz and Rav Yaakov Balti, from the Kollel Tikkun Chatzos at Kever Rachel.

“Around seven years ago we were learning at Kever Rachel, and there was a Jew who would arrive every day before daybreak.  One day he heard us…we were then at Kever Rachel from the Yeshiva:  Yaakov Balti and Rav Aharon Berkowitz.  We were speaking about Rav Berland.

“One day, this Jew heard us speaking and said:  You’re talking about Rav Berland?  I have an incident to tell you about…I was involved in this story.  I have a friend who was in Thailand and was sentenced to the death penalty.  They appealed and conducted legal proceedings…bribe, tried everything – there was a death sentence, only there still wasn’t a date set for when he would be taken out to execution.

“The family had already purchased a [grave] plot, already accepted this situation, that they were going to sit Shiva.  There’s no appeal, no way to cancel the sentence in any way whatsoever.  Nonetheless, there was still no date set.  They heard the witnesses and the judgement.  Everything was already processed and the matter was closed.

“One day, the Jew who was at Kever Rachel tells us, he heard about Rav Berland.  Then he told the family of the Jew in Thailand: ‘Listen, Rav Berland is a great Tzaddik, a miracle worker.  Many people saw miracles from him.  Maybe he can perform this great miracle?’

“This Jew never heard of Rav Berland before and, of course, didn’t know him.  The Rav said to him: ‘I’m coming to you on the 26th of the month to free you.’

“When the Jew in Thailand heard the Rav tell him this, he mamash wrote him off in his heart.  He said, what does that mean?  How will the Rav come?  Fly to Thailand and then what?  He’ll come with some plane, some tractor and break down the doors?  How will he come exactly to free me?  Mamash, the entire conversation seemed weird to him.  He mamash just wanted to end the conversation.  There’s nothing to talk about with a person who speaks, apparently, such nonsense.  What does this mean, I’ll free you on the 26th of the month?

“The conversation ended and he felt disappointment and the waste of money which they gave for a Pidyon to the Rav.  Less than fifteen minutes passed when his attorney came in to visit him.  They brought him into the visiting room and he said, ‘I don’t know what happened, but the judge, after the case was, as it were, closed, and there’s already a verdict, and the sentence is looking him in the eyes – finished.’  The attorney said to him, ‘The judge says that she wants to hear the witnesses again, and she told us to choose one of two dates: the 26th or the 28th.’  When he heard the word ‘26th’ he passed out, fell on the floor.  His first word after waking up was, ‘Set it for the 26th and that’s it.’

“This was around two weeks before the date.  He asked his friend, who is this Rav?  Who is this Tzaddik?  There already was no chance, nothing to talk about, nothing to hear!  What did the Rav do here?

“The friend answered, ‘This is the Tzaddik Rav Berland.  They talk a lot about him, that he works miracles.’

“The Rav said to him, ‘No, but I prepared for you a special amulet to give to your friend in Thailand, and he should grasp it throughout the time of the trial.’

“The friend answered, ‘Rabbi, there’s no chance.  The courthouse is above, and the prison is below.  They bring him up on an elevator with a cage, surrounded by a ring of policemen.  There’s no chance that it’s possible to bring it to him.  Everyone is looking.  It’s impossible to even talk to him.’

“Everyone travelled together to Thailand.  He held in his hand the amulet which the Rav told him to give.  He said to himself: ‘I made self-sacrifice.  It doesn’t matter what happens to me, but I’ll do what the Rav said.’

“The friend relates: ‘I put my hand in between all the policemen.  Everyone was looking.  Everyone saw how I handed to him.  No one tried to prevent me, and also no one spoke after I gave it into his hand.’

“The friend asked him, ‘What is this?’  ‘I told him that this was an amulet which Rav Berland sent him.  Grasp this in your hand throughout the trial.  This is what the Rav said!’

“The trial began.  There were four witnesses at his trial – three Thais and one American.  He said that they began to give testimony.  The judge heard all of them, and when the last witness finished, the judge said: ‘…It’s written here that each time you gave the same testimony.  Now, you’re saying something completely different.’  She canceled the sentence completely.

“Baruch Hashem, this Jew is alive in the merit of our Rebbe, Hashem protect him – Rav Eliezer Berland shlit”a.  Something small which the Tzaddik says… 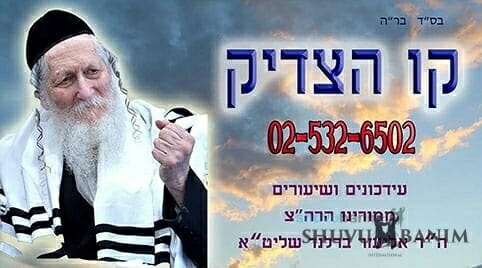 See the video (in Hebrew)

Why Channel 13 is a ‘danger to Israel’s democracy’

The truth behind Channel 13’s lies – Part I

Back to life after a bullet in the brain