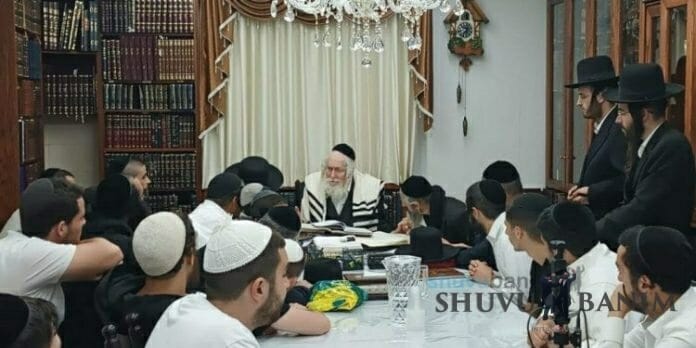 Members of the “Meshivat Nefesh” community of Beit Shemesh, which draws many people to the way of Rebbe Nachman of Breslov, merited to enter Wednesday evening to the home of our Rebbe Rav Berland shlit”a for a shiur.  The community, led by Rav Yehudah Karmel shlit”a, merited in recent years to draw close to Rav Berland shlit”a and to draw from the “flowing stream” Rebbe Nachman.

In the shiur, which lasted for more than 35 minutes, the Rav spoke about the weekly Torah portion and the controversy of Korach and his faction.  In the middle, the Rav shlit”a added chizzuk in the subject of domestic tranquility and the level of one who lives in Jerusalem.

In the shiur, the Rav expounded that despite that Korach was a very lofty soul and that he had a hidden intention in the entire controversy with Moshe Rabbeinu, because he wanted to bring the complete redemption, nonetheless one cannot dispute the tzaddik, regardless of what one can “accomplish” through this.  Below is a short section from the shiur:

“Korach ben Yitzhar – therefore it’s written “the fat of yitzhar (olive oil)” (Bamidbar 18:12).  Korach was pure olive oil, but he needed Moshe.  He heard the Ten Commandments.  Because the more tzaddik a person is, so does he have a greater test in nullifying himself.  Rabbi Natan brings that he was the head of the Levi’im.  He was on the highest level of all the tribe of Levi, but he couldn’t nullify himself to Moshe, because the greater a tzaddik a person is, the more difficult it is.”