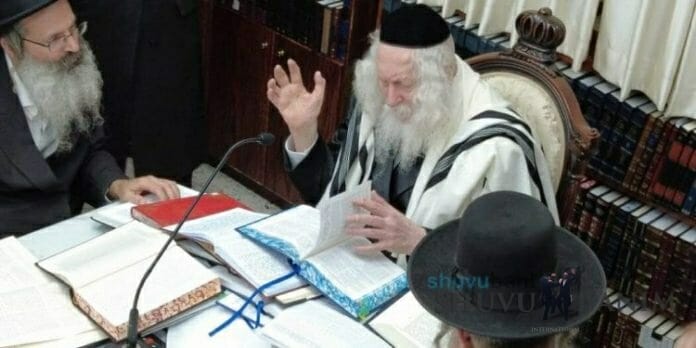 Bnei Torah and the rest of the residents of the city of Torah, Bnei Brak, know that if they want to taste a true Shabbat, that they need to come to the minyan of niggunim (holy melodies) of our Rebbe Rav Eliezer Berland shlit”a on Rechov Shahal 10, Bnei Brak.  The minyan, which has drawn hundreds close to the great light, is active for more than six years with the same vitality every Shabbat.

Regarding the process that led to the establishment of the minyan, the minyan’s gabbai Rabbi Yosef Lebaiv relates:

“When we were with the Rav in South Africa a number of years ago, the Rav continued Kabbalat Shabbat for an hour and a half.  The light that we received from the niggunim was great.  One evening after we returned to Israel, at a gathering of Breslover Chasidim, [with] tens [of people] in the field, we sang there the niggunim with arousal.  Then it came to the mind of one of the participants the idea to start a minyan every Shabbat.  At the beginning, the idea was only about the prayers of Shabbat evening, and so many people began to come every Shabbat evening to a unique Tefilah with niggunim and dancing.  The prayer went on for an hour and a half with a mix of words of Torah said in between.

“Word of the minyan spread fast and many began to visit the place.  However, not everyone can come every Shabbat, being that the minyan is far away for them, but many come to the minyan, each one according to his ability.  There are many type of people and it’s possible to see people from all communities and types.  The location of the minyan is in the home of my father, Rav Avraham Lebaiv, on Rechov Shahal 10.  Our Rebbe Rav Eliezer Berland shlit”a came to the place a number of times, and every time many came to hear and to be strengthened by his great light.  In general, the responses to the influence of the minyan were amazing.  One neighbor once asked the question, ‘Why isn’t there a minyan on Shabbat?’  This was close to Rosh Hashanah, when most of the community had already travelled to Uman, and she related that since the establishment of the minyan, she sits glued to her seat and listens to the prayer instead of going to sleep after candle-lighting.”

A portion of the minyan’s participants – almost forty people, came last Monday, 14 Heshvan, for a shiur at the home of our Rebbe Rav Eliezer Berland shlit”a.  In the shiur, the Rav shlit”a spoke about a number of topics of the day, among them about Hashem’s great mercy on us in giving the victory in elections a few days earlier.  Afterwards, he spoke about the great level of prayer at Rachel Emeinu, and said that someone who hasn’t yet traveled there, should go today, and this is considered “Isru Chag” for the yahrzeit of Rachel Emeinu.  He then spoke about Iyov (Job), that if he had accepted his suffering with love, they would have mentioned him in the Amidah – Elokey Iyov.  Afterwards, he spoke about the weekly Torah portion, that Sarah didn’t want to return to desire, and that about this she wept.  Therefore, it’s written, “Sarah denied [it], saying ‘I did not laugh,’ because she feared, and he said, ‘No, you laughed.’”  After more than forty minutes of fiery words, the Rav shlit”a concluded the shiur with Kaddish and blessed the participants of the minyan.