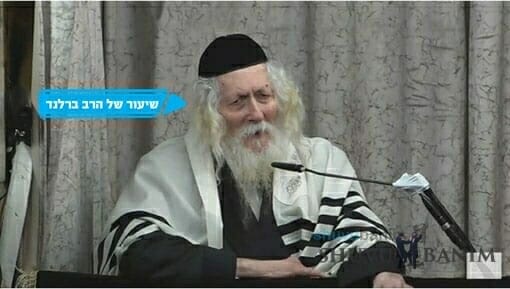 The shiur which our Rebbe, Rav Eliezer Berland shlit”a, gave over on the evening of Rosh Chodesh Sivan after the counting of the Omer:

So now the Shavuot holiday is approaching.  Two more days is the Shavuot holiday – the giving of the Torah.  So Hashem called first to the women.  It’s written in Midrash Tehilim – Midrash Shocher Tov – chapter 8, [that] first He called to the women – one day beforehand.  He asked if you want to receive the Torah.  Because if the woman doesn’t agree, then it’s impossible to receive the Torah.  The first thing, Hashem called to the women, because the women educate the children, make sure that he will be a good child.

Then the first thing, Hashem called to the women – this is the foundation of the home.  The woman determines what will become of the child.  Ninety percent he receives from the mother, ten percent from the father.  Therefore, he is in the mother’s body for nine months, and she still needs to nurse – her brain, her milk, because the child only develops from mother’s milk!  Not from Materna, not from anything [else]!  [These] just blow up his belly.  The brain only grows from mother’s milk!

The shiur begins at timecode 38:58

Therefore, Hashem asked the women first.  The women needed to give their consent to receive the Torah.  Then it’s possible to receive Torah.

“Mouth to mouth do I speak to him” – Why is Parashat Beha’alotecha the Highest? – Shiur of R’ Berland Shlit”a