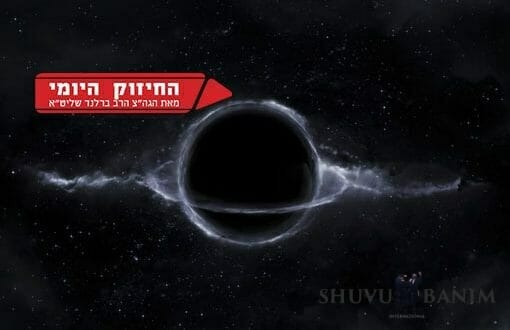 The Daily Chizzuk with our Rebbe Rav Eliezer Berland shlit”a, taken from the shiur of 3 Iyar 5782.

Sunday, 7 Iyar – “Whoever doesn’t come to help the Tzaddik has no light”

Netzach she’be Netzach – Rabbeinu says, I’ve been victorious and will be victorious – because all those who draw close to Rabbeinu are sparks of Rabbeinu.

There were some stars which didn’t come [to help Devorah].  They turned into black stars.  “Cursed is Meroz, said the angel of Hashem” (Shoftim 5:23) – the angel curses whoever doesn’t come to help the Tzaddik.

The moment that Barak hesitated – he only said to her “You also come with me.”  She said to you to go.  Why don’t you go?  You already lost the merit to defeat Sisra.

“It will not be for your glory the path that you go, because Hashem will deliver Sisra into the hand of a woman” (ibid. 4:9), because you hesitated.  If a person hesitates… Yes, I’ll go to the Tzaddik, I won’t go with the Tzaddik.  If he has only a slight hesitation.

He has hesitation, a tiny bit of hesitation – ponders.  Why does he ponder?  Because he is in [a state of] pride!

They don’t urge him to go with the Tzaddik, so he lost everything, lost all his merits, lost his entire World to Come, his entire present world.

Also, you’re already unable to defeat Sisra – [can’t do] anything.  If he has only a little bit of pondering, one doubt whether to draw close to the Tzaddik – then he is driven from everything – they throw him outside.

Don’t Fear, There Are No Wars, Only Rabbeinu – Daily Chizzuk by Rabbi Eliezer Berland Shlit”a

Who is the Only One who Can Conquer All Jerusalem?  The Daily Chizzuk with Rabbi Eliezer Berland Shlit”a

David Simcha - August 31, 2022 0
The video clip from the massive Prayer Rally at the Cave of the Patriarchs in Hevron with our Rebbe, the Gaon and Tzaddik, Rav Eliezer Berland shlit"a -- Erev Rosh Chodesh Elul 5782 These are...
Read more

David Simcha - August 31, 2022 0
Learners of the order of 8 pages of Gemara a day, which our Rebbe Rav Eliezer Berland shlit"a established, merited to complete Shas yesterday after only one year. In the daily shiur which is given...
Read more

Who is the Only One who Can Conquer All Jerusalem?  The Daily Chizzuk with...

David Simcha - August 29, 2022 0
The Daily Chizzuk of our Rebbe, the Gaon and Tzaddik, Rabbi Eliezer Berland shlit”a – how the oath of Avraham Avinu to the Hittites regarding Me’arat HaMachpelah is related to Jewish rule in Jerusalem II...
Read more

“The Moment that We Go with the Tikkun HaKlali, We Conquer the Whole World”...

David Simcha - August 29, 2022 0
Below is the complete shiur which our Rebbe Rav Eliezer Berland shlit”a gave over after the recital of 7 Tikkun HaKlalis at the prayer gathering last Thursday night – Erev Rosh Chodesh Elul in...
Read more

The Accuser Tries to Distance One from the Tzaddik – Daily...