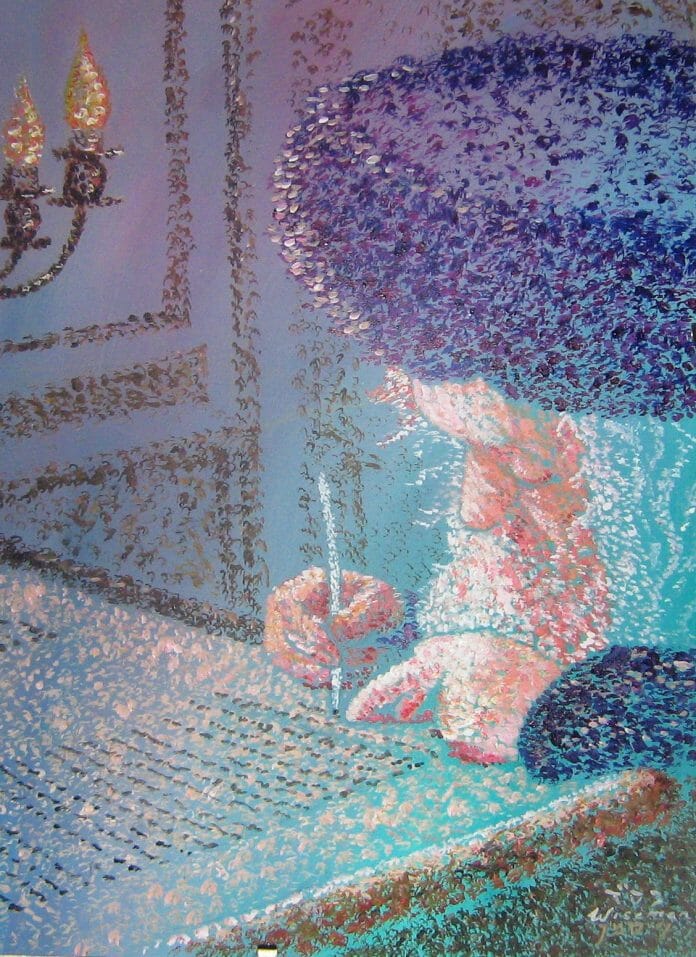 The Zohar asks: It is written in verse 14, “The Egyptians saw the woman” and in verse 15 it says again, “The officers of Pharaoh saw her.” Why does it say that she was seen twice? Why is the description drawn out? They saw and then they saw her again. Rather, the Zohar says an awesome thing: when Avraham Avinu arrived in Egypt, the Egyptians said to him: Open up the casket! We want to see what you really have in there. We want to see what you are hiding. And when they opened the casket up a great light shone out—a light like the sun at noon. Midnight was turned into noon. Hashem took the sun out of its sheath. “When it was opened the light was like the light of the sun.” Sara Imeinu was shining like the sun and suddenly all of Egypt was shining from the light of Sara. All of Egypt was filled with light. The Egyptians thought that Avraham had some kind of invention inside the casket—some kind of electrical device or magic, some sort of concealed rays, some kind of diamond that emitted light. They didn’t want to believe that Sara was the source of this light. They said: Can a person radiate such light? They didn’t believe that a person could emit such light. They thought that there was something else causing the light that came from the casket. It couldn’t be that it came from Sara. Maybe there was some kind of hidden device that emitted those rays. So they decided to check the casket. They pulled Sara out and started checking with all kinds of instruments to determine the source of the light—where was the hidden source of the light that lit up all of Egypt? “Since it is written that the Egyptians saw the woman. What does it mean “and the ministers of Pharaoh  saw the woman?” They saw that the light didn’t come from the casket but from Sara. This is why it is written “and they saw” twice. They were moving Sara in and out of the casket again and again and checking the casket to determine from where the light was emanating. Maybe there is some kind of diamond here? Some king of glowing source of light? And only after they checked the casket several times did they realize that this great light was coming from Sara herself. Sara merited completely shedding her impure body. She was shining like the sun! This is just as the Baal HaTurim says in Parshas Chaye Sara on the verse, “and Sara lived one hundred years…(chaye Sara Meah Shana). The rashei teivos spell the word shemesh (sun). Sara was literally a sun. If a person wants to shed his physical body and to extricated himself from his bad character traits—to change his leprous body to a holy one from Gan Eden and to merit shining like the sun—he can only accomplish this through learning Torah.

The Rebbe said that there is Anpin Nehirin (glowing face) and there is Anpin Hashuchin (darkened face). A person who doesn’t learn Gemara has a Anpin Hashuchin! An Anpin Nehirin can be achieved only by learning Gemara. There is an entire lesson about this in Likutei Moharan—Torah 101. There it is written that a person cannot achieve Anpin Nehirin—the glowing face—other than by learning Torah b’iyun. Does a person think he is smarter than Rebbe Nachman? Smarter than the Torah? Smarter than HaKadosh Baruch Hu? Hashem said: “A man’s wisdom lights up his face” (Koheles 8:1). Only wisdom lights up the face. A person needs to go around with enlightened eyes and a glowing face, but this only comes from learning Gemara! The Rebbe said: A man’s wisdom lights up his face. Where is your light? Why do you think about money all the time? Why are you thinking about nonsense all day long?